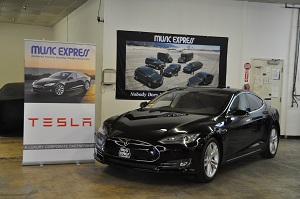 The sleek and refined Tesla S sedanLos Angeles, Calif.—Last week, Music Express took delivery of six brand-new, all-electric Tesla S sedans. The six vehicles were distributed among the four Music Express offices: San Francisco, Los Angeles, Washington, D.C., and New York. The company hopes that customers will embrace the car so that it can transition its primary fleet away from traditional, gas-powered vehicles. While it’s not the first California transportation company to add electric vehicles to its fleet, it is one of the largest to do so in the hopes of making a broader transition.

“If our clients accept them as a livery vehicle, then we will change much of our fleet to Tesla over time," says West Coast Affiliate Manager Perry Barin. “It’s a green car and it’s a luxury car at the same time.” Barin says that the car as it stands right now is a “driver’s car,” with the majority of the experience focused on the driver. Music Express hopes to continue to work with the automaker by providing direct client feedback about comfort and legroom. Barin hopes that the good relationship the company has with Tesla will be an open one that leads to vehicle improvements with a livery application.

The Tesla S currently gets an estimated 265 miles per charge, which is monitored by touchscreens in the driver’s compartment. Music Express selected about a dozen chauffeurs in its Los Angeles office to be trained on the safe operations of the vehicle, especially in understanding the gauges and ensuring correct monitoring of the electrical charge. Because it doesn’t operate like a gas-powered vehicle, the chauffeur has to look for different feedback and cues to ensure it is being utilized to its fullest potential. It’s a completely new type of experience, laden with high technology and quiet operating environment. The city is also working on adding charging stations for future use, so that on-the-road usage is a little less dicey.

The Los Angeles office got a chance to test them out just in time for one of the city’s largest events: The Oscars. Barin says that the Teslas were met with a good reception for its debut this past weekend. “We used them for the Oscars and clients loved them. One of our clients even wanted to drive it!”

Meanwhile on the colder East Coast, the vehicles will be introduced to clients as early as later this or early next week as the New York office awaits its TLC permits, according to Billy Placier, East Coast affiliate manager. Tesla is not only one of the only all-electric vehicles on the road, it’s also been rated one of the safest. According to independent testing done by the National Highway Traffic Safety Administration (NHTSA), the S has been awarded 5 stars in all safety rating categories—the highest of any car.