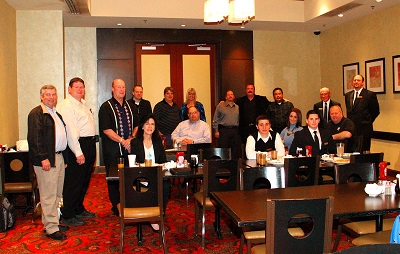 Members of the KLA at a breakfast meetingMetropolis, Ill.—The Kentucky Limousine Association (KLA) held a two-day mini-event for its most recent association meeting. KLA members traveled along the Western Kentucky Parkway into the great state of Illinois, and then on to their final destination at Harrah’s Metropolis Hotel and Casino … sans Superman and his pals. The whole affair was put together by the KLAs very own Superman, Val Newton of Regal Limousine Service.

First on the agenda was a discussion of Kentucky House Bill 513 and Kentucky Senate Bill 177, which are already in committee for this 2014 legislative session. These bills were created due to a recent ruling by a federal judge in favor of Wildcat Moving of Lexington, K.Y. in its battle to overturn “anti-competitive” state laws, and its effective "re-regulation" of laws relating to certificates of operating authority for limousines, and other "need for service" industries. Because of Uber and the proliferation of other rogue apps, KLA membership would clearly like to see these bills passed into law very soon.

Louisville, K.Y. local news affiliate, WHAS, ran a story exposing an illegal limousine operator who was caught in a sting operation by Louisville Metro Police. This illegal operator was caught, red-handed, on camera by law enforcement officers. The coverage and/or videos are posted on KLA website. KLA members were encouraged to direct the general public to these incriminating videos, so they will be forewarned of illegal limousine operators in the area who come out en masse during the busy prom and wedding season.

Other 2014 KLA initiatives announced and discussed during this meeting included: End of year KLA “Operator of the Year” and “Chauffeur of the Year” awards; the Kentucky State Fair Board’s request of an invitation to a future KLA meeting to expand the existing relationship between the two groups, and the pros and cons of Livery Coach and FASTTRAK software were bandied back-and-forth by KLA members currently using those software packages, or similar products with a chauffeured ground transportation industry focus.

The next KLA meeting guests/speakers were announced including Churchill Downs Vice President of Operations, Greg Bush, and various members of his staff. They will be speaking in regard to the upcoming 140th running of the Kentucky Derby on May 3.