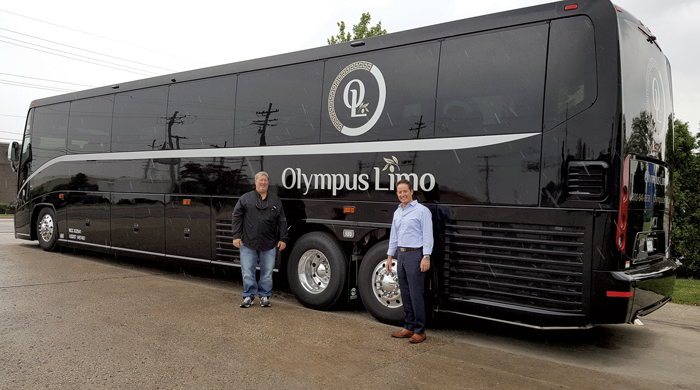 “These are our first new coaches,” said CEO Ted Koutsos, who with his wife Katie, started New Port Richey, Fla.-based Olympus with two stretch limousines in 1996. “Now, we’re positioned to offer a higher end level of luxury transport demanded by many of the corporate and destination management companies we serve today, especially on longer 600-mile plus coach trips.”

And for added safety, Olympus added MCI’s optional 360-degree camera that provides a bird’s-eye view around the entire coach to assist with parking and small movements.

The all-black exterior prominently features Olympus Limo’s logo. “Black implies a luxury-level industry standard,” said Koutsos. “This is the first-time black coaches of this rank and reliability are available in the areas we serve. Now we have a diverse fleet to cover it all—we can serve every size group and budget including school trips, local charters, and shuttles. And we do it all with exceptional service around the clock.” 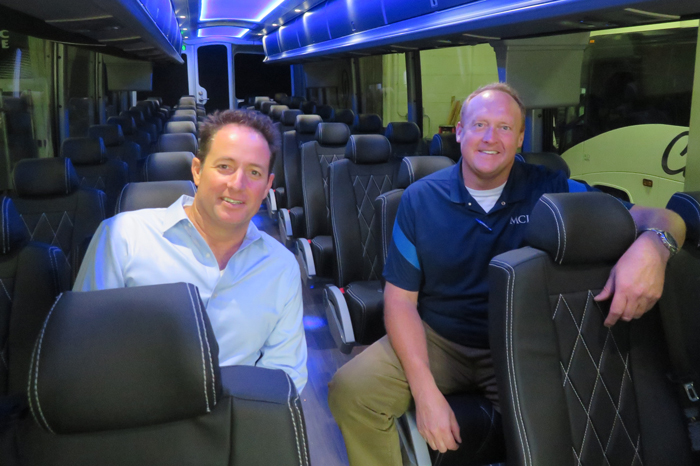 Olympus Limo CEO Ted Koutsos (left) with MCI Southeast region V.P. of New Coach Sales Sean Kelchen Olympus Limo was originally founded to serve Koutsos’ family-owned Spartan Manor banquet facility to transport wedding parties and other customers. Over time, Olympus started adding sedans, SUVs and minibuses to serve a widening clientele including cruise ship transport along Florida’s west coast and trips to Orlando and Miami. Tampa has become a favorite port of departure for a growing number of cruise passengers who want to enhance the cruise experience with a day or two at either the front end or on the back end of any of a variety of Caribbean itineraries.

Olympus’ first coach was a pre-owned MCI 102 DL3 bought in 2008 and today, it is one of the largest providers of luxury transportation on the West Coast of Florida.

“We’ve built trust over time with our customers,” said Koutsos. “We did it with limos first starting as the smallest but then grew to be the largest.” Olympus Limousine employs 11 office staffers and 55 uniformed drivers and today, the coach side of the business now accounts for about 40 percent of revenues and continues to grow.

Koutsos sees the ride-share phenomenon in part good for business. “It has created a marketplace where people are comfortable with paying for transportation services, and we’ve been able to grow by adapting.” Koutsos also believes in sharing equipment with affiliates in need of need extra coaches for larger events. “Our three new livery-edition J4500s put us in a good position to help other higher-end operators when they need us,” he said.