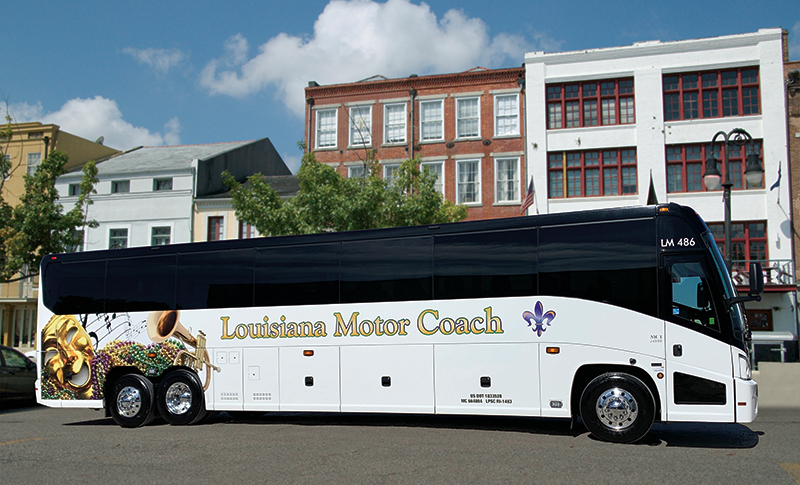 This growing regional operator serving conventions, sports events, charters, and tours is known for a safe and luxurious experience for its customers. They wanted to add a new class of vehicles with next-generation passenger amenities to its 30-vehicle fleet. MCI was pleased to win their business for the first time.

“Everything about the purchases of these new coaches fell into place,” said Louisiana Motor Coach Vice President and General Manager Louis Sanders, who with his wife Mary Sanders, the company’s president, and eldest son and partner Jeffrey Celeste, launched the business 10 years ago. “The MCI team came through with the quality and coach amenities we were looking for. We like the new interior design including the lavatory and new digital driver dash on the J4500.”

The leadership team brings more than 25 years of tour and charter experience to their operation, which has grown to become one of New Orleans’ largest, local family-owned operators.

“We’re persistent and already have a second generation in place,” said Sanders, who noted son Ryan Sanders and daughter Caitlin Sanders Schultz are also part of the business’ hard-working team. “We take a lot of pride in the style and young age of the equipment we offer and how we serve our community.”

Travel & Leisure magazine ranks New Orleans, a bus mecca, as the third most popular destination in the United States. Louisiana Motor Coach is distinguished by its newer fleet, commitment to service and unique excursions. In addition to traditional charter services, Louisiana Motor Coach helps travelers with customized tours of New Orleans, fishing adventures, and scheduled coach travel to away games for the city’s professional sports teams.

Sanders also said the company is benefiting from its recent association with FlixBus, a German-based digital transportation company that launched routes in March from New Orleans to Houston and San Antonio, Texas with scheduled stops in Baton Rouge, Lafayette, La., And other cities in route. Founded in Germany in 2013, FlixBus launched U.S. service in 2018 and manages the technology, marketing, and route system logistics for locally based carrier partners who transport FlixBus passengers.

Giving back to the community is also important to Louisiana Motor Coach. The company is active with local sports teams, “Stuff the Bus” charity events, and is a very proud sponsor of the Young Life organization, supporting its annual summer trips and golf outing.