Looking forward! Positivity was the name of the game during the recent virtual meeting of the Minority Limousine Operators of America (MLOA) call on August 26. The two-hour meeting, entitled The Power of the Pivot, was hosted by MLOA President Darrell Anderson of A-National Limousine Service and featured speakers Marlon McWilson of Bay Area Transport Services, Winston Cooper of Vision One Consulting Services, and Sean Duval of Golden Limousine. Each shared their strategies and success stories of pivoting during the pandemic. Several dozen people joined the call. 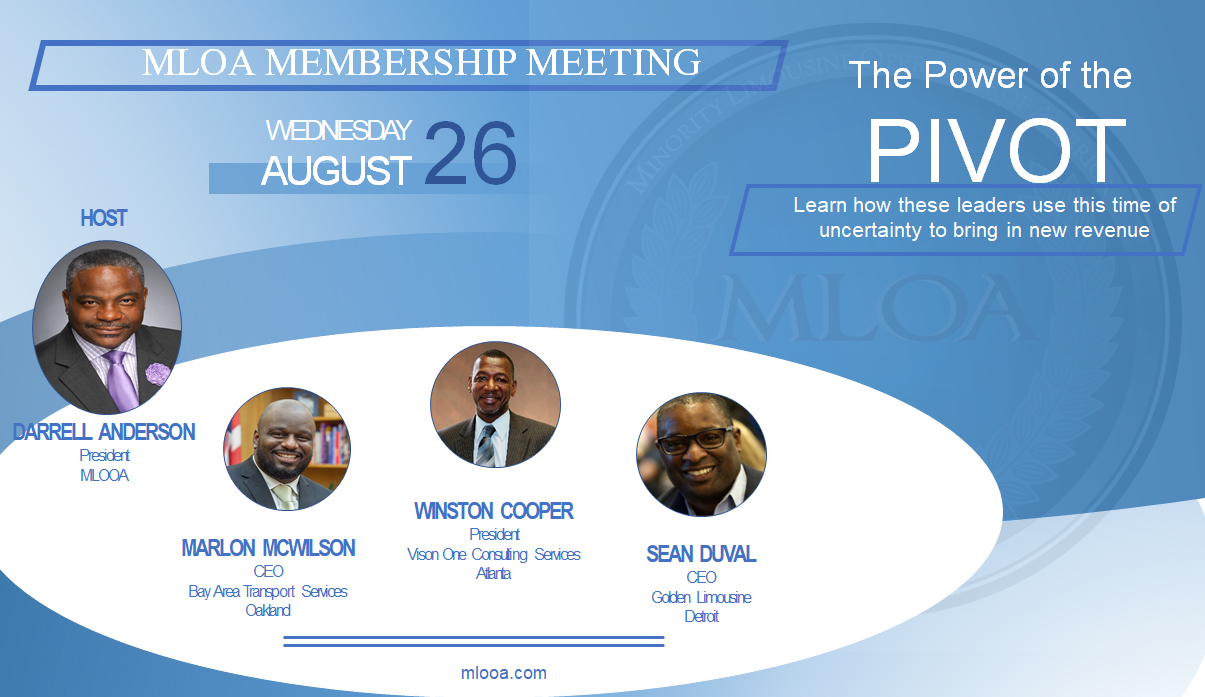 Before yielding the floor to the speakers, association business was discussed, including updates from 1st Vice President/Treasurer Travis Latham of Fellowship Fleet and Secretary Tiffany Hinton of MOTEV. MLOA has extended its membership to include those in transportation logistics. Hinton also reminded attendees that the goal of the association is to provide as much value and education to the members as possible, and that the Board is always available for any reason, not just for a problem.

The majority of the meeting, however, was dedicated to the speakers and how they are navigating the downturn in business. First up was Marlon McWilson, a new MLOA member who recently completed his certification as a minority-owned business.  McWilson stressed the importance and power of association membership, as well as the value of listening to your market and coming up with solutions. While growing Bay Area Transport Services, he also recently launched a cleaning company to help him diversify. He’s also looking to focus more on affiliate work.

Cooper then spoke about his numerous pivots through his 30-year career. A former airport ground transportation manager at the Hartsfield-Jackson International Airport in Atlanta, Cooper founded his consultancy company in 2012. He noted that transportation was already changing well before COVID hit, and he urged operators to look toward logistics, mobility as a service (MaaS), and risk/safety as they contemplate the future of their companies. An optimist, Cooper noted that pivots can be temporary to get through a storm—but also necessary.

Rounding out the trio was Sean Duval, who spoke about his lengthy history of having to pivot with the economy and seize the opportunities that have presented themselves when his company faced a serious emergency—starting with the savings-and-loan crisis in the ‘90s. Duval says he has built his business over the past three decades by focusing on relationships, not only with other operators (he is a member of a Driving Results’ group) but also the local community and government. In fact, those contracts have kept Golden Limousine moving during the pandemic, even thriving as one of their contracts was expanded. He also credited his strong team with Golden’s success, which includes Manager of Service Delivery Maya Adrine.

In a final note of business, Anderson and Executive Director Veretta Yancey sought the opinion of members on holding its annual fall meeting in-person (in Atlanta) or online. Although a poll of members on the call skewed heavily toward a virtual conference, the idea of a hybrid concept warranted further discussion. A decision will be announced in the near future.

The speakers were a hit, and a part two to the discussion is expected to happen for an upcoming meeting (date and time TBD).