Golden Limousine International, located in Ann Arbor, Michigan, recently celebrated its 29th year of business in January. What began as a small company operating from a bell desk inside Weber’s Inn, a boutique hotel in Ann Arbor, with two 1987 Lincoln Town Car Armbruster 6-passenger limousines has grown into a fleet that, over the years, has included sedans, limousines (including a stretch Hummer), SUVs, buses, and motorcoaches.

While many small businesses fold within their first five years, Golden President & CEO Sean Duval credits his company’s longevity to the “never say no” mentality towards customer service he learned from a certain fast-food mega giant.

“It’s funny. Everyone always reacts: “You started at McDonald’s?” But you have to remember that it’s not always the product, but the service, and their customer service training is superior to anyone else out there,” says Duval. “They put so much effort into training for customer service that if their training were applied universally, I think that McDonald’s would blow everyone away ... more than they already do. I took that ‘find a way to say yes’ mentality and carried it over into the ground transportation business. We’ve never said no to a client; we find out a way to get things done, which has led to us getting our biggest contract with a pharmaceutical firm.” 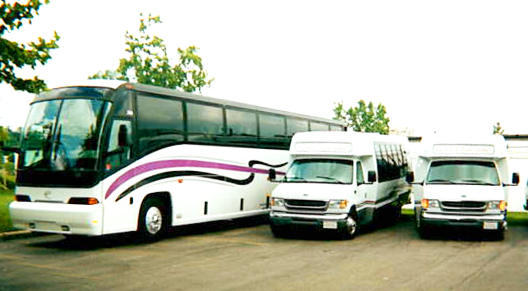 Duval has clearly come a long way since his early days with white stretch limos, and he recognizes that Golden Limousine’s name is a bit of a misnomer since they don’t have a single limousine in the fleet. An early adopter of buses in 1997, the company specializes in shuttle bus transportation, whether it’s federal work, employee transit, athletic teams, or major area events. Duval sees the company’s work during the 2004 Ryder Cup as a major turning point for Golden.

“At that time, it was beyond our ability to manage an event like that. But we found the right partners, and knocked it out of the park for those guys—so much so that they wanted us to handle their work in Ireland,” says Duval.

The diversity of Golden’s fleet is another factor in the company’s success, according Duval. The ability to say yes to jobs and clients of all sizes has kept their vehicles moving through three recessions and now a global pandemic. In the post-COVID world, Duval now uses his shuttle buses for sedan work and coaches for shuttle work as they offer safe social distancing for multiple passengers.

“Thank God for these buses because they’re what really saved us during the pandemic,” he said.

Like the rest of the industry, Golden was hit hard during the early days of the pandemic, and its staff was reduced to seven people. However, the company experienced a rebound and 100 staffers have been rehired since last year. What’s more, most employees are on salary and receive benefits.

“Over the years, we found out how critical we are to our community,” says Duval. “We’re not just a limo company that takes people to prom. We’re managing services for local transit authority, making sure people get to work every day. Now we’re a critical part of our local infrastructure.”