The day of friendly competition, named for one of NELA’s founding members, brought together more than 100 members of New England’s chauffeured ground transportation industry, affiliates, friends, and volunteers. In addition to the tournament, the event also hosted raffles, silent and live auctions, the Rolling Stogies cigar truck, and dinner. 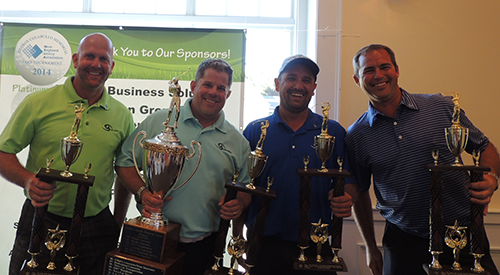 With the support of operators and sponsors such as Century Business Solutions, The Hudson Group, Commonwealth Worldwide Chauffeured Transportation, Lancer Insurance, Olsen Cadillac, and Mercedes-Benz, donations were made to the Dana-Farber Cancer Institute and CHIPS House—the latter of which is a home for those with head injuries and holds a special significance to NELA.

“One of George Colarullo’s sons suffered a closed-skull brain injury in a motorcycle accident and now lives in a facility called CHIPS House, which is down on The Cape in Massachusetts,” says Rick Szilagyi, CEO of NELA. “So each year we donate either solely to CHIPS House or we may spread it around a little bit.”

While no one went home with this year’s hole-in-one prizes of a Toyota Avalon, Cadillac XTS, or $10,000, L.A. Limousine’s team emerged as tournament champions yet again. Byron Brandis, Billy Goerlich, and Justin Benson came in eleven strokes under par—just one stroke ahead of runner-up Able Limousine’s team—making this the fourth year in a row that the New Hampshire-based company won the tournament.

With the 2015 golf outing already scheduled to take to Marlborough Country Club’s course on Tuesday, August 18, Szilagyi is pleased that the annual event is steadily climbing toward its pre-recession attendance.

“Prior to the economy crashing, we had a full field of 144 golfers plus a waiting list for a couple years,” he says. “We’re glad that this year we able to field 100 golfers, and we’re excited about making the tournament bigger and better next year.”