Motor Coach Industries (MCI) has announced the delivery of 10 2023 model year MCI J4500 coaches to Cline Tours, marking the operator’s 300th motorcoach and MCI’s 10,000th J4500 built on its production line in Winnipeg, Manitoba. Cline Tours has been an MCI customer since 1996. 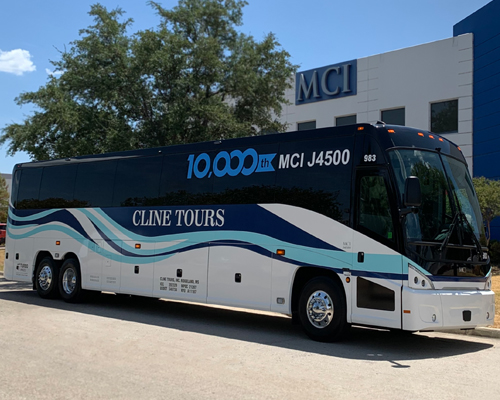 “We are very pleased to celebrate production of our 10,000th J4500, a big milestone, and to do so with customer Cline Tours,” said MCI Vice President Private Sector Sales and Marketing Brent Maitland. “Cline Tours’ consistent selection of MCI’s J-Series speaks to the quality of the model, the relationship between our companies, and MCI’s responsiveness in providing reliable parts service and support. We appreciate the confidence Cline Tours has in MCI and we are committed to continuing our great relationship as Cline Tours continues to grow.”

Cline Tours chooses the J-Series because of the models’ reliability and fleet uniformity between its locations, according to Cline Tours President John McCommon. The operator has a diverse fleet of 230 vehicles, including mini buses, school buses, more than one hundred 45-foot MCI J4500 vehicles, and six 35-foot MCI J3500 coaches that operate from nine locations in Mississippi, Alabama, Arkansas, and Tennessee.

“If you see one Cline Tours coach, you’ve seen them all,” McCommon said. “So many of our moves require multiple coaches. It’s important to our customers: They like the same look.”

Having launched the MCI J4500 in 2001, the model has been the industry’s best-selling model since 2004. Since then, the J4500 has undergone several redesigns, including a recent interior update that provides a more spacious cabin and industry-leading legroom. MCI also introduced a 35-foot version of the J-Series featuring all the styling and performance benefits of the 45-foot J4500. In 2019, Cline Tours was among the first operators to add six MCI J3500 coaches to its fleet.

“With regards to MCI, they are a totally first-class operation,” McCommon said. “We don’t have many issues with our J coaches and if we do, MCI jumps in to fix things. They supported us through COVID, and we’ve had a lot of other factors helping us to be in a substantially much better place today.”

To celebrate the production and delivery milestones, MCI showcased its 10,000th J4500 coach at the International Motorcoach Coach Group (IMG) Strategic Annual Meeting on August 9-12, 2022, in Arlington, Texas. The meeting brought together IMG’s tour and charter operator members throughout North America, including Cline Tours, for business, educational, and networking sessions. IMG members are an elite group of 54 leading operators throughout North America that adhere to strict safety and operational standards to ensure the highest levels of service performance.