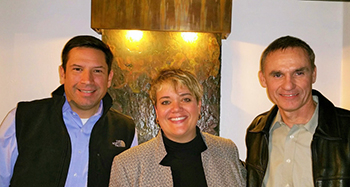 Santa Fe Mayor Javier Gonzales (left) with Kristen Carroll of The LMC Group and Paul Thompson of Accent New Mexico Santa Fe, N.M. — The LMC Group’s kick-off session for the new livery and chauffeured car CEO Benchmarking Group was graciously hosted and welcomed by Paul Thompson of Accent New Mexico and Santa Fe Valet & Limousine, as well as by Santa Fe Mayor Javier Gonzales. At the historic and serene Inn & Spa at Loretto, CEOs converged from locations throughout the U.S. and Canada. The intense two-day session was led by Kristen Carroll, founder of The LMC Group.

At 7,000 feet above sea level, Santa Fe is not only the nation’s oldest state capital but also the highest. The city, rich with beauty, art, culture, and cuisine, was a great source of inspiration to the group of CEOs. Many of the participants were in Santa Fe for the first time.

As host of the event, Thompson took the opportunity to educate his fellow operators on the exceptional business he has established in this magical city. Santa Fe is a global destination, and his business is made up largely of tours, high-end boutique services, private valet services, in addition to the traditional airport and limousine service that keeps his local companies quite busy.

It is no mystery why Thompson’s Accent New Mexico and Santa Fe Valet & Limousine have quickly grown into the most sought-after chauffeured car and event transportation services company in Northern New Mexico, says Carroll. Providing service to both Santa Fe airport and Albuquerque, Thompson is uniquely positioned to diversify his service offerings, flexing resources throughout the vast waves of demand and need in this extremely well-traveled destination, according to Carroll.

Building on an impressive career in hospitality and a diverse portfolio of many successful small businesses, Thompson founded Santa Fe Valet & Limousine in 2007. Quickly, he identified the opportunity to widen his offerings, providing large group event logistics and ground transportation management, accommodating groups with up to 600 members and more. He added several buses, vans, and executive shuttles to his fleet, along with Town Cars, limousines, and specialty vehicles. Heavily invested in new equipment, Accent New Mexico now boasts the largest, most diverse livery fleet in the state, according to Carroll.

His impact in the community was ever apparent as he hosted The LMC Group’s inaugural benchmarking session. In addition to our visit with Mayor Gonzales, Randy Randall, Executive Director of TOURISM Santa Fe, met with the group to share his perspective on the role of chauffeured car and ground transportation within the events and tourism industries.

“Santa Fe was a beautiful and stunning backdrop as the location of our kick-off event, and we are so thankful to the City of Santa Fe, Mayor Gonzales, Director Randall, and Paul Thompson, for their gracious welcome. We accomplished much and left with inspiration that will last us weeks and months to come,” says Carroll.