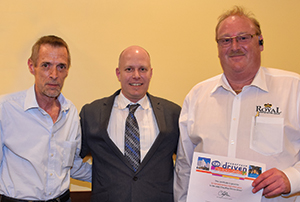 Orlando, Fla. — The Greater Orlando Limousine Association (GOLA) held its most recent meeting February 10, which was attended by industry members from all over both the Sunshine State and the country.

As Florida continues to present a unified, statewide fight against TNCs, much of the GOLA meeting was dedicated to a report from Florida Limousine Association President Rick Versace of A1A Airport & Limousine Service. Versace conveyed news from the Broward County Commission’s hearing he attended earlier that day, where the commission unanimously voted that TNCs should be regulated as if they were traditional transportation companies.

The decision followed the county attorney’s issuance of cease-and-desist letters to Uber and Lyft weeks prior, as well as county officials’ efforts to fine TNC drivers and impound their vehicles for failure to operate without the proper for-hire permits.

“Rick didn’t take a breath for the 20 minutes he spoke,” said GOLA President Cliff Wright of Royal Transportation Group. He added that Orlando also has issued cease-and-desist orders to TNCs: While Uber—which Wright reported has roughly 4,000 drivers operating in the area alone—“is still turned off at the airport,” Lyft and Sidecar are continuing to operate.

Wright also said that Versace outlined the efforts needed to take the TNC battle to the state capitol in Tallahassee, which GOLA has “already pledged to help with, financially and by sending up a truckload of members.” Continuing with the spirit of industry-wide support, Bill Battisti of Battisti Customs announced at the meeting that, for every one of the company’s vehicles purchased in Florida, it will donate $1,000 to the state operators’ ongoing fight against TNCs.

Chauffeur Driven Publisher Chris Weiss also attended the meeting, and spoke about the economy, the state of the industry, and CD’s upcoming events, focusing on the inaugural Executive Retreat in Nashville this June. He also raffled off a pass to both the Nashville retreat and October’s show in Miami, with Robert Wheeler of Wheeler’s Luxury Transportation winning the former and Wright winning the latter.

The next GOLA meeting is scheduled for March 10.