Mosaic President Tapped as a Keynote Speaker at Two Events 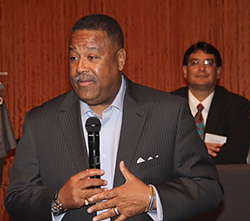 At the first event, the Opportunity Fair, hosted by the Puerto Rico Minority Supplier Development Council in late February, Brewster was invited to speak during the closing cocktail reception. His speech was focused on the concept of small and diverse businesses trying to navigate corporate supplier diversity programs in pursuit of contracts. Using the Chinese philosophy of yin and yang—complementary forces—he addressed how suppliers and businesses could also work together to achieve this level of synergy. The event was held in Puerto Rico at the Caribe Hilton Hotel.

A few days later—March 3 and 4—Brewster was on hand at the Southern Minority Supplier Development Council’s Minority Business Opportunity Day (MBOD). Using the same core speech, as it related to the purpose of the event, Brewster was also a featured speaker at this event. The annual conference had over 1,200 people in attendance and it took place in Universal City at the Sheraton Universal Hotel.

Both of the councils are part of the larger National Minority Supplier Development Council, which connects corporations with many of the Minority Business Enterprises (MBEs) that serve as suppliers for these larger companies