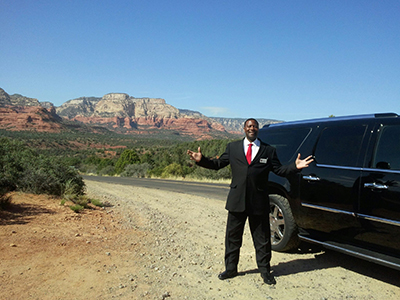 Driver Provider chauffeur Samuel Ezell Phoenix, Ariz. — It is said that “God created the Grand Canyon and resides in Sedona,” which is the stunning, picturesque town located south of the iconic national park and two hours north of Phoenix. The Driver Provider—which currently operates offices in Phoenix and Tucson, Ariz., as well as Jackson, Wyoming through its most recent acquisition of Alltrans in 2014—announces its expansion to Sedona, better known as “Red Rock Country.”

According to President and CEO Jason Kaplan, The Driver Provider will provide a full array of vehicles including Town Cars, SUVs, Sprinters, minibuses, and motorcoaches for both individuals and groups. Guests and groups arriving in Phoenix will be met and transported on an easy, relaxing 113-mile drive to the town, which has been the go-to place for those seeking spiritual healing as well as nature lovers alike. The city is also host of the annual Sedona International Film Festival as well as Sedona Jazz on the Rocks Festival.