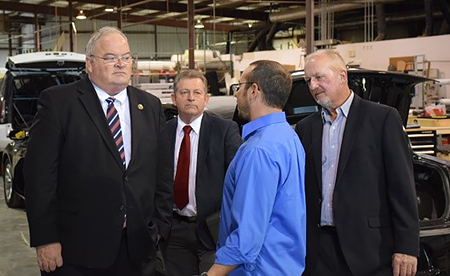 In a press release circulated by the Congressman’s office, he detailed his stops along the tour, the first of which was Springfield Coach Group. Springfield has expanded its operation over the past year, and has added a mobility-focused line of vehicles, which allow wheelchair-bound individuals easy self-transfer to cars. Kevin West, vice president of Springfield Coach Builder’s mobility, sedan, bus, and channel partner divisions, said it began with the idea of helping wounded veterans returning from combat to have wider access to vehicles than just minivans.

West and his team went over regulations with Long and asked for his help in Congress to reduce some of these regulations, which would hopefully lead to expansion of economic opportunities. Keeping up with regulations is a task for the business. “I could have 10 people in the office looking at regulations” and still not see it all, West said.

Despite the regulatory hurdles, Springfield Coach Group has grown, doubling its employees from 25 to 50 since October 2014. Even better, West said he may need to double the size of the staff again soon.