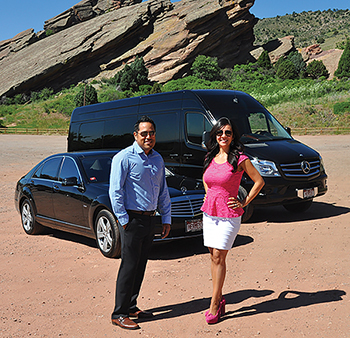 Jorge and Rocio Sanchez‚ president and vice president of Hermes Worldwide, which recently ranked on the Inc. 5000 list Denver — More than four months ago, Jorge Sanchez submitted an application in the hopes that Hermes Worldwide ranked among the 5,000 fastest-growing private companies in the country.

And when the Inc. 5000 list (inc.com/inc5000) was released earlier this month, Sanchez was thrilled to see that Hermes made its debut on the annually announced roster at No. 4,151.

“We're really excited about the recognition and validation of the growth we have been living since our beginning,” said Sanchez, who is president of the Colorado-based Hermes. “We always felt like we were growing rapidly but never knew how we stacked up against other companies regardless of the industry. To get affirmation on a national scale is really exciting for us. We hope to use this recognition to help catapult us to the next level.”

Urged to apply by members of business consulting firm Strategy Leaders, this is the first time in Hermes’ seven-year history that Sanchez has submitted his company for consideration on Inc.’s list.

“I think we may have been able to qualify sooner but it was never really on our radar,” he says. “We were too busy managing our growth and serving our clients that we didn't even think to try to apply for something like this.”

While this is a new first for the company, Hermes has received awards before—a testament to the teamwork that Sanchez says helps the business reach new heights.

“There’s really no one we can overlook,” he said. “This is something that we would not have been able to achieve without our vendors and suppliers—and most importantly not without the commitment from our employees, both current and past. We have to recognize that they’re the ones who helped make all of this possible, that our employees are instrumental in helping us to achieve that success. And our clients, who entrust us with their needs and utilize our services all over the globe, which has really helped us to accelerate our growth.”

Sanchez and his wife Rocio, who’s the vice president of Hermes, will be attending October’s celebratory gala in Orlando, where they will be among those recognized for their company’s ongoing success.