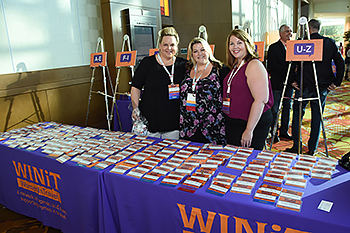 The WINiT Welcoming Committee Orlando, Fla. — WomenInTravel (WINiT), a network of women and men providing career development services to women in the travel, meeting, event management, and exhibition management industries, celebrates the success of its second Annual Summit this past July at the Hyatt Regency Hotel in Orlando, Florida. WINiT’s Annual Summit, which was a sold-out event, brought together its members to showcase and celebrate the impact WINiT has had on the advancement of women in the various industries it serves.

“We were thrilled to have hosted the second Annual Summit. The event marked the anniversary of the launch of WINiT, which is an exciting milestone. Most importantly, it brought together the women and men who comprise the organization and who, together, have already been a part of driving measurable progress for women in our industries,” said Dawn Repoli, WINiT’s director of program management.

"We congratulate WINiT on [its] successful 2nd Annual Summit. WINiT provides vital and necessary career development services that reach across gender and industry borders. GBTA is proud to be a partner and supporter of the curriculum provided to our joint community,” said Michael McCormick, GBTA executive director and COO.