Atlanta, Ga.--Fred Rich, formerly the president of Cooper-Global, resigned his position at Cooper and has teamed up with Johan DeLeeuw and Olympus Worldwide Chauffeured Services. According to Rich, he was initially going to start his own company, but was then approached by a couple of local companies about joining them, as well as some national companies about possibly setting up an Atlanta branch office. After exploring his options, Rich decided to join Johan DeLeeuw as chief executive officer at Olympus Worldwide.

“I had many discussions with Johan,” says Rich. “This was a very important decision for me as I really was planning on starting my own company. But after spending a lot of time with him, I discovered an infrastructure that was exactly what I was looking for. The culture, the incredible software system, the chauffeurs, the dispatchers, the opportunity to help build another company … it was a perfect fit.”

Rich has been in the industry since 2003, when he purchased Starlight Limousines. In 2006 he joined Cooper-Atlanta and was a part of the team that grew Cooper into the largest limousine company in Atlanta, and helped them become a global provider. Rich believes in building lasting relationships and believes that people buy people, not companies.

“The sky is the limit at Olympus. Johan and I both believe that there is no substitute for impeccable customer service, and that is being seen in the consistent steady growth of the company,” says Rich.

Johan DeLeeuw came to the United States from Holland in 1998 and became a chauffeur at Olympus. He also worked as a dispatcher and a reservationist. In 2005, Johan purchased the company and rebuilt it. Under his ownership, it has become one of the top providers in the country in just a few short years. Olympus was named as one of America’s fastest growing companies in 2011 and 1012 by Inc. 500 Magazine.

According to DeLeeuw, “I will continue to be over all aspects of operations. Fred is going to come in as CEO and help build our sales team and take over all marketing initiatives. We are excited about the future of Olympus Worldwide…our entire staff is!” 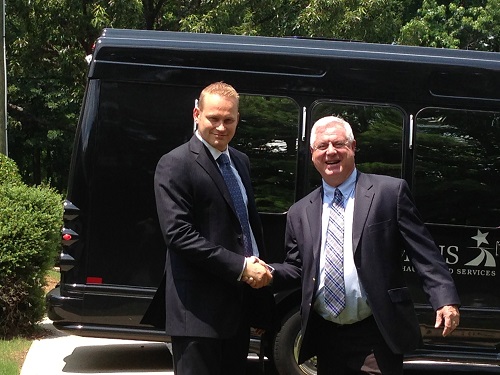