Riverside, Calif.—Grech Motors recently announced that it has begun taking preorders on its newest model, the GM28 E450 luxury shuttle bus. With seating for 21+2, plenty of rear luggage and a price point below $100,000, the GM28 E450 will be the industry’s most accessible high-end shuttle bus to date. 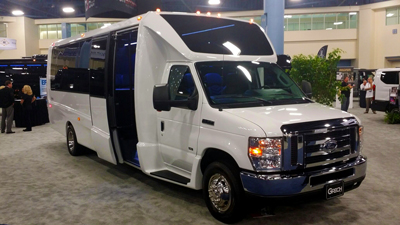 Grech GM28 E450 “We developed our new GM28 E450 in response to operators demanding a high-end shuttle for smaller groups,” says VP of Sales & Marketing AJ Thurber. “The GM28 fits a nice niche between our Sprinter shuttle and GM33 F550 shuttle. We already have had an excellent response with pre-orders flooding in.”

Production begins in January 2016 with an availability date of the first run estimated to be in late February through early March.

Operators interested in securing their GM28 can call Grech Motors at (951) 688-8347 or visit grechmotors.com/reserve-your-gm28.