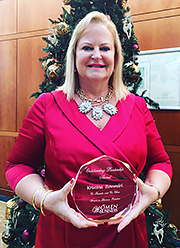 President and CEO Kristina Bouweiri Dulles, Va. — Reston Limousine is pleased to announce that it closed its 25th anniversary year with $24.2 million in revenue, a 13 percent year-over-year increase from 2014.

“We’ve continued to experience growth steadily since 1990, and the last several years have been no exception,” President and CEO Kristina Bouweiri said. She says that in 2014, the company posted $21.4 million in revenue, and $18.4 million in 2013.

In addition to the fiscal success, the company also saw growth in its fleet size, which expanded to 240 with the purchase of new vehicles including sedans, SUVs, minibuses, and motorcoaches. The company also recently took delivery of three new Prevost motorcoaches, expanding its fleet to 240 total vehicles to start 2016.

The X3-45 units represent the first half of the company’s 2016 model-year motorcoach purchases. The new buses are equipped with Wi-Fi, 110v and USB outlets, seat belts, ADA lifts, lavatory, and premium PA/AV system. The X3-45 is billed by Prevost as the world's premier inter-city coach and features shorter entry steps, a wider entry door and aisle, and more interior height than other commuter coaches.

“These purchases represent the next step in Reston Limousine’s increasing commitment to the motorcoach segment of our markets,” Director of Business Relations Barry Gross said.  “We’re thrilled to be offering the region's newest motorcoach fleet for our corporate and charter clients this year.”

Also in 2015, Reston, which grew its staff to 400 across all departments, added a new service for outside companies in need of industry-specific DOT audit training. RLS Management Services, led by nationally certified Safety and Training Manager Keith Johnson, held four multi-day seminars throughout the year, and classes are expected to be offered quarterly in 2016. Furthermore, the explosion of the craft spirits industry throughout the D.C. area opened up the opportunity for the firm to add new distillery and cidery tours, which were met with success.

Other notable recognitions in 2015 include the highest safety rating from the Department of Defense for the third consecutive audit, the listing of Reston as the Top Executive Transportation Service in Washington Business Journal’s annual Book of Lists and in the Top Women-Owned Businesses in D.C., and the election of Gross to the Virginia Motorcoach Association’s Board of Directors.

Additionally, Bouweiri was recognized with an Outstanding Leadership award from George Mason University’s School of Business, a Heroines of Washington award from the March of Dimes for her philanthropy, and inclusion on the Washington Business Journal’s annual Power 100 list of the most influential executives in the D.C. metro area.

“We’re excited for what 2016 will bring, and we’re poised for even more growth in the next year,” Bouweiri said.