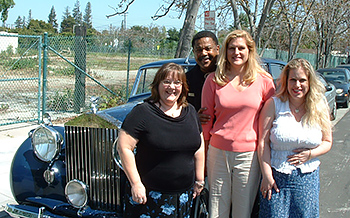 Before founding Mosaic Global Transportation, Maurice and Rhonda Brewster ran Rollz Royce Limousine ServiceRedwood City, Calif. — After a 2015 that landed Mosaic Global Transportation the 2016 Super Bowl contract and saw it tackling the Bay Area’s employee-shuttle business, the team behind the company is excited to begin celebrating its 14th anniversary of operations.

“Initially, I was thinking that 14 isn’t the year to celebrate—maybe I should wait until 15 or 20. But tomorrow’s not promised—let’s celebrate 14 years,” Mosaic President/CEO Maurice Brewster said with a laugh.

Maurice and his wife Rhonda—Mosaic’s COO—entered the chauffeured ground transportation industry in the early 2000s. With a shared entrepreneurial spirit and Maurice’s passion for classic cars, the couple left their corporate jobs to found Rollz Royce Limousine Service, a retail-based firm that began with a single vintage Rolls-Royce for hire. With their fleet of classic cars expanding to 13, the company soon found a good deal of success in their niche; however, the Brewsters shifted gears and rebranded in 2004, focusing solely on corporate and group work.

Mosaic generated half of its work from affiliate business at the time, which was somewhat unusual then. “We treated our affiliates around the country like we treated our employees,” Maurice says. “We built relationships with those vendors and let them know that our success was dependent on them.”

This philosophy has served Mosaic well. Currently, their second and third largest accounts are on the East Coast, and their international reach includes 440 cities worldwide.

Maurice credits “good old-fashioned salesmanship” for the success of a company that nearly doubled in size in the past year. Rhonda adds that that their values and corporate culture have a strong influence as well.

“You can’t build a successful business until you have good people around you,” she says. “We’re trying to keep our family-business feel and our core values of teamwork, respect, customer service, and philanthropy front and center. We believe in giving back to community, and making it a place where people want to come to work.”