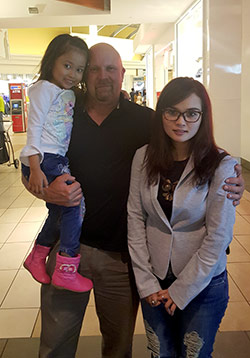 Wayne Blanchard with wife Cindy and daughter Michelle Nashville, Tenn. — Good news to report from within the Chauffeur Driven family. Contributor Wayne Blanchard was recently reunited with his family after being geographically separated from them for several years. His wife Cindy and daughter Michelle were tangled in red tape since 2010 while they waited for visas to return to the U.S. from Indonesia.

Blanchard met Cindy while she was studying at Vanderbilt University on a student visa. While visiting her family after graduation, her student visa ran out, which prevented her return to the U.S. Despite the distance, the couple remained together, and after the couple married in Asia, they began a long, arduous immigration process. Thanks to support from Congressman Jim Cooper (D-Tenn.) and industry friends, their paperwork passed through the right hands, and Cindy and Michelle finally got the State Department’s OK to return to the U.S.

Their arrival at the airport was something Blanchard will never forget. “You can't imagine the feeling of hearing a 2-1/2 year old yell ‘Daddy!’ across a crowded airport after waiting so long for them to be allowed to come home,” he said. “But once I saw their beautiful smiles, I finally knew what it's like to truly feel content.”

Chauffeur Driven is glad to see the Blanchards together again, and wishes them the best for the future.