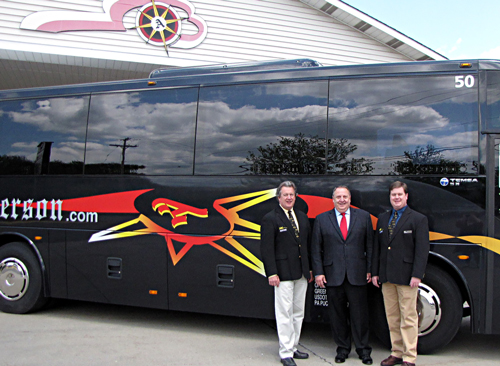 Greeneville, Pa. — Anderson Coach and recently purchased the 500th Temsa TS 35 motorcoach delivered in the U.S. as they prepare to celebrate their 80th corporate anniversary.

The 500th TS 35 is a 40-passenger luxury coach that sports a stunning metallic black graphics package. Powered by a Cummins 345 HP ISL engine driving through an Allison B500 six-speed transmission, it’s equipped with 110V outlets, USB ports, an REI Elite Entertainment system with 15” monitors and a woodgrain rubber floor. Like all Temsas delivered in the U.S., it has a stainless-steel monocoque frame, ample underfloor luggage space, and the latest in safety technology.

“We have been very pleased with the customer satisfaction, performance and size of the 35-foot Temsa,” said Anderson’s President Doug Anderson. “With the demise of the 47-passenger coach, we began shopping for an alternative to fill the midsized vehicle need, because there continues to be demand from customers for a coach appropriate for smaller groups. After trying other products, (and actually distributing one), we purchased our first Temsa and we’re not looking back. In fact, we are looking forward to working with the Temsa product and CH Bus Sales for many years to come. I’m glad that Temsa filled the market segment other manufacturers were not addressing with a product that is priced right and delivers reliable service.”

“We’re proud to have a distinguished operator like Anderson operate our coaches,” said Tony Mongiovi, NE Vice President of Sales and Service for CH Bus Sales, Temsa’s exclusive North American Distributor. “I don’t know of any modern motorcoach model that has reached this milestone so quickly… and it’s fitting that it go to Anderson. From the beginning, we’ve tried to be selective in who we sold to. We targeted quality operators, because we are building for the future. Anderson is a perfect example. They run a first rate, and very diverse, company. Like Temsa… they’re here for the long haul. We are delighted to be part of their team.”

Founded by O.D. Anderson in 1937, what started as a school bus route to a one-room school has grown into a full-service transportation company that serves more than a half-million customers each year. In 2011, Anderson  was named International Motor Coach Group’s “Operator of the Year,” and in 2016, the company earned the prestigious International Motorcoach Group Safety Award.