NLA Hosts Its Annual Day on the Hill 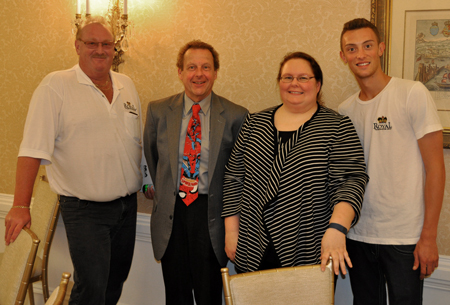 L to R: Cliff Wright of Royal Coach and Limousine, CD’s Industry & Brand Ambassador Philip Jagiela and Managing Editor Susan Rose, and Joey Wright of Royal Coach and Limousine Washington, D.C. — Over 100 operators descended upon our nation’s capital on April 26-27 for the NLA’s annual Day on the Hill, the industry’s most successful lobbying effort. The meetings once again took place at the St. Regis and was spearheaded by the NLA Board of Directors and staff, in conjunction with Cornerstone Government Affairs, a public affairs firm that has been assisting the association for several years and understands the challenges our industry is tackling.

TNCs dominated the conversation as they continue to be the perennial issue plaguing legitimate and legally operating transportation companies nationwide and all over the world. The industry has won small victories throughout the country—often in regards to TNC regulation, mandatory fingerprinting and background checks, and keeping TNCs out of cities entirely—but the war wages on in many other cities, counties, and states.

The event came on the heels of two game-changing settlements to class action lawsuits initiated by Uber drivers in California and Massachusetts. Drivers won an $84 million settlement with the potential for an additional $16 million should the company go public and profits meet a certain percentage; however, drivers had to agree to remain independent contractors instead of continuing to seek the employee status they were fighting for in the lawsuit. Being granted employee status would have given drivers additional protections and compensation that they currently do not receive—and which would have cost Uber and other TNCs potentially hundreds of millions of dollars. The buzz at Day on the Hill was the pittance that most drivers in the settlement would receive—some as low as $24.

NLA Secretary Scott Solombrino, president of Dav El/BostonCoach, who has been an outspoken opponent of TNCs’ tactics to strong-arm local regulators and politicians, noted that the settlement still didn’t address the key issue: misclassification of Uber drivers as ICs.

“This is about protecting the American worker. Uber effectively controls their drivers as employees, but refuses to fairly compensate them (e.g., overtime, workers’ compensation, health care),” he said in a USA Today article about the settlement.

Of course, the issue may not be entirely dead and buried since other class action lawsuits have sprung up across the nation. Also, the settlement requires Uber to make certain changes to its partnership with drivers, which includes more warning before terminating a driver from its platform. The settlement was the topic of many heated discussions with NLA operators. 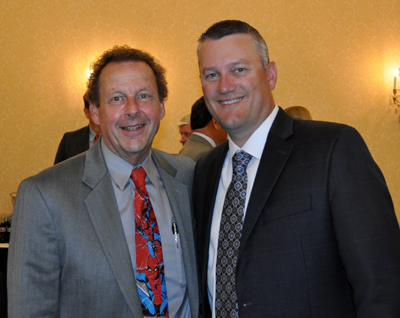 CD’s Industry & Brand Ambassador Philip Jagiela (left) and NLA President Gary Buffo of Pure Luxury Transportation The first day of the two-day event commenced with a Board of Directors meeting, which was attended by CD’s Managing Editor Susan Rose and Industry & Brand Ambassador Philip Jagiela. Cornerstone held events later in the day to bring attendees up to speed on local TNC battles, as well as prepare them for their congressional meetings that would take place the following morning and afternoon. Louie Perry, Todd Webster, and Mike Smith of Cornerstone also provided an update on the contentious presidential primary as well as other local races that may impact the industry’s chances to successfully level the playing field. Operators have been carefully cultivating relationships with their representatives, and the election could have an impact.

The final day began with a breakfast before operators were bused to the Capitol to meet with their local representatives and/or their aides; each group included a skilled and seasoned member of Cornerstone who was familiar with the process. Cornerstone facilitated all of the meetings and collected talking points to assist operators in initiating conversation. By all accounts, meetings were productive and representatives were receptive to the issues affecting the industry.

Chauffeur Driven will have more about Day on the Hill in the June issue.

NLA has also responded to developments in Texas cities Austin and Houston. Solombrino lauded Austin’s “common-sense regulation” to require fingerprinting of TNC drivers, which was passed by the city council in 2015. In an up-or-down vote, Austin residents overwhelmingly voted to uphold the measure, and both Uber and Lyft stopped operating in the city in protest on May 9.

Last week, NLA President Gary Buffo of Pure Luxury Transportation penned an open letter to Houston Mayor Sylvester Turner to express his gratitude for his support of the industry. From the letter, Buffo wrote: “The drivers of these TNCs operate in a manner that – with few exceptions – mirrors taxi and private ‘black car’ services, and interact with a large cross-section of your populous in Houston. It is only fair that the citizens of your great city step into a TNC-operated vehicle with the same confidence and security they have when using any other means of private ground transportation. … The National Limousine Association applauds you, and proudly stands by your side.” The full letter can be read at limo.org/press-room/400630.