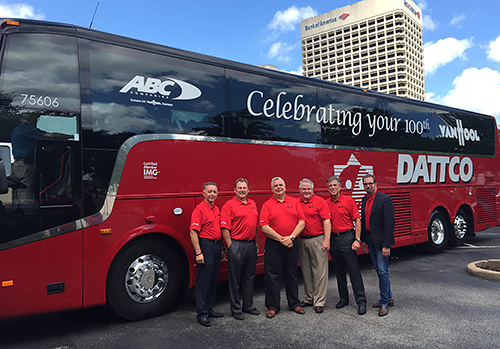 DATTCO’s current fleet includes Van Hool TD925 Double Deck coaches, as well as CX45’s and TX45’s, but this 100th coach is unique. The new TX45 is configured with two passenger doors, a style rarely seen in North America, and seating for only 52 passengers, offers superior leg room. This configuration, with the lavatory at the rear door, below passenger eye level, coupled with Van Hool’s unique rear window gives a panoramic view for all the riders. In addition, a second door speeds up loading and unloading the coach.

In addition to the TX45 being showcased at the IMG SAM luncheon, DATTCO also took delivery of their first-in-fleet Van Hool CX35. This addition to their diverse fleet expands their midsize offerings for smaller groups who want the luxury and amenities provided on the CX35.

Established in 1924 and now with the second and third generations of the DeVivo family now involved in management, International Motorcoach Group (IMG) member DATTCO is one of the Northeast’s largest and most respected passenger transportation companies. Serving three New England states with more than 2200 employees in 27 locations, they operate comprehensive nationwide motorcoach charters and tours as well as serving the region with line run, transit, commuter, and school bus service.

DATTCO’s Sales and Service Division is one of the nation’s largest IC Bus dealers. In addition, they sell and service Thermo King, four brands of mini-buses, as well as components like Braun wheelchair lifts. They also offer maintenance services and collision repair to other operators.