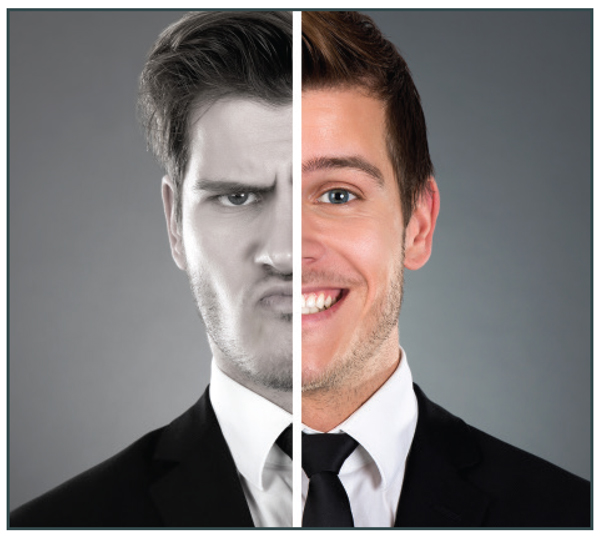 With so much of our business being conducted on a computer or over the phone, it’s easy to become a bit lax in the fine art of face-to-face interaction. Despite the obvious significance of a responsive web presence, it’s important to remember that the most successful business relationships are formed with live networking.

But what many don’t realize is that effective business communication is much more than a great pitch, sharp suit, and firm handshake. Psychologist Albert Mehrabian, the best-selling author of Silent Messages: Implicit Communication of Emotions and Attitudes, conducted numerous studies on nonverbal communication and suggested that only 7 percent of any message is conveyed through words. That means a staggering 93 percent of all communicated information is expressed silently, and in many ways, this nonverbal interaction says more than any string of words ever could.

1. Facial Expressions
Without a doubt, the most common—and telling—nonverbal means of communication is through facial expressions. Human faces are able to make more than 10,000 different expressions, and each one articulates volumes of information with ease. Smiling, frowning, blinking, and every teenager’s favorite, eye-rolling, are the strongest and most relatable expressions, but even the smallest eyebrow twitch or nostril flare can be read with minimal effort. The most surefire way to establish a connection with a stranger, client, or even long-time acquaintance: Smile! A smile is welcoming, warm, and establishes you as a person who people want to spend time with.

2. Body Movements
Body movements, or kinesics, include common practices like hand gestures or nodding. Very often, body movements convey enthusiasm or excitement. For instance, we all know someone who “talks with his hands.” However, other aspects of kinesics include actions that we commonly perceive with nervousness or anxiety like involuntary tremors, frequent clearing of the throat, or a shaking leg. During meetings, it’s best to keep your hands on a table or in a gentle clasp. You want to avoid “drumming” on your thigh or repeatedly touching your face, as these are often distracting.

3. Posture
Posture is critical in making a strong impression. How you stand or sit is one of the important elements in how you are perceived by others. Someone who stands with their back straight and head held high exudes confidence, assurance, and strength, while, conversely, someone who is slouched or facing the floor demonstrates uncertainty, indifference, or even weakness. To express friendliness and positivity, maintain an open posture. Stand with your legs hip-distance apart and keep your torso exposed as opposed to covered with your crossed arms. Keep your head raised and relax your facial expression. A closed posture, especially crossed arms across the chest, gives the impression of boredom or hostility.


Human faces are able to make more than 10,000 different expressions, and each one articulates volumes of information with ease."


4. Eye Contact
Perhaps the best way to build rapport with a stranger is by maintaining eye contact. Eyes can indicate interest, attention, and involvement, while failing to make eye contact may be interpreted as disinterested, inattentive, or rude. However, this doesn’t mean you have to stare directly into the face of another person—quite the opposite, in fact. There is nothing more aggressive than staring intensely into someone’s eyes. Experts suggest that healthy eye contact consists of looking semi-randomly at the area around the eyes, which includes the eyelids and eyebrows.

5. Paralanguage
Any parent with small children is familiar with the phrase “don’t use that tone of voice with me.” This is a perfect example of how paralanguage—the aspects of the voice that differ from the words—affects the message. The most obvious example is sarcasm, in which the tone of what’s being said conveys the opposite of the message. Odds are that someone who drawls “Grreeeattt” in a laconic tone is less than thrilled at what’s being presented. Less obvious paralanguage includes the speed, volume, and pitch of speaking. For example, a presentation mumbled too quickly suggests that the salesman is, at best, nervous, or, at worst, being disingenuous. Be conscious of how quickly you talk, and be sure to speak clearly and loud enough to be heard. But be sure to take care not to be too loud, as this comes off as belligerent and off-putting.

6. Proxemics
Thanks largely to Seinfeld, the notion of a “close talker” has become part of our consciousness. People are very protective of their personal space, particularly the area that Mehrabian calls the “intimate space” (i.e., 6 to 18 inches). This is a zone generally reserved for family, close friends, or romantic partners. When engaging in business conversation, you always want to be far enough that the other person is comfortable, but you do not want to be too far, suggesting that you are distancing yourself or uninterested in the conversation.

7. Physiological Changes
With nonverbal communication closely related to emotion, the physiological reactions are often the most associated with anxiety and discomfort. Sweating, blushing (or flushing), and teary eyes are all dead giveaways that someone is ill-at-ease. When you recognize that an associate you’re speaking to has a case of the nerves, it’s important that you make them feel comfortable. Also, everyone’s been guilty of a clammy handshake at one time or another.

To develop a successful relationship, it’s crucial that you have not only strong speaking skills, but also a keen understanding of nonverbal cues that accompany conversation. Nonverbal communication is mostly emotional in nature; that is to say that it is spontaneous and cannot be faked. Having an awareness—or even a control—of the seven aspects of nonverbal communication will give you an advantage in business dealings when you understand the message behind the message. [CD0416]