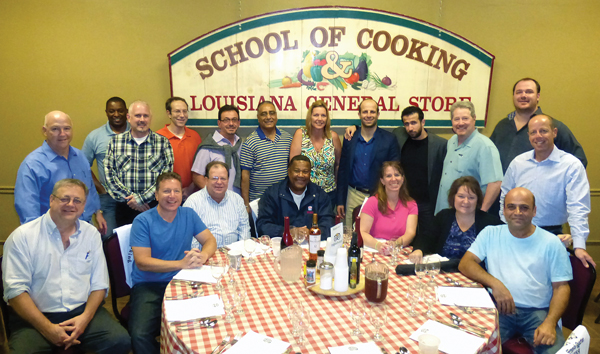 On Monday, Spinning Wheels, which comprises owners and senior management, began their three-day event by introducing new members as well as catching up with the group’s professional and personal news. Arthur Messina, Driving Results’ managing director, feels that this kind of familiarity among peers is essential. “We try to get all our members to build relationships with each other,” said Messina. “If you build relationships, understand their business motto, and like the people you’re working with, then chances are that you’re going to want to do business with them.”

After a lunch at the famed Napoleon House restaurant, the crew reconvened for a presentation by meeting sponsor Limo Alliance’s President Raj Grewal and Chief Strategy Officer Lenore D’Anzieri, who highlighted new products from the technology firm. Following a Q&A was a dinner at New Orleans institution Antoine’s, where, after a traditional Creole meal, a Baked Alaska with the Spinning Wheels logo was brought out by the wait staff. The night ended with a sampling of the legendary Bourbon Street nightlife.

Day two kicked off with a conversation about expanding the workplace. Tony Mehdiof of North Point Transportation in Atlanta gave a firsthand account of the construction of his company’s new facility and shared a slideshow of the process. A roundtable forum was next, covering topics ranging from smartphones and tablets to hiring and maintaining a full roster of chauffeurs. New member Michelle Miller of Pittsburgh’s Elite Coach Transportation found value in these discussions: “Joining a group of your peers like Spinning Wheels is always interesting. The first instinct of most people is to sit back and listen to everyone talk to get the feel of the room—since you don’t want to speak and sound like you don’t know what you’re talking about. However, you soon realize that these professionals are just like you and have the same issues as you.” 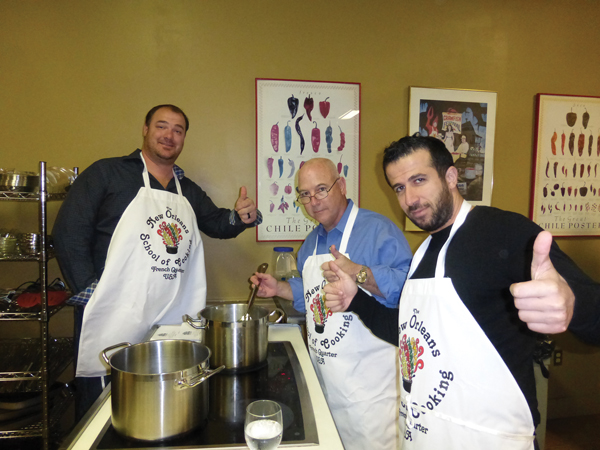 L to R: Scott Tyler, Eric Windstein, and Selim Aslan The meeting always includes a team-building component, which often gives members a chance to experience the local flavor. This time, they were put to work, as they headed to the New Orleans School of Cooking, where they were split into four teams to whip up some “authentic” Louisiana cuisine. The teams were each assigned to cook gumbo, crawfish bread, shrimp and grits, or bananas Foster—with often hilarious results. Messina is a firm believer in this type of group activity, and feels that the loose, fun environment can be more conducive to bonding and networking than a classroom.

The last day of the Spinning Wheels event included a visit from Chauffeur Driven Publisher Chris Weiss, who discussed the direction and philosophy of the magazine for the coming year, and encouraged everyone to get involved by submitting answers to our monthly Benchmark & Best Practices column. Weiss also took the opportunity to mention CD’s own Crescent City sojourn, the New Orleans Executive Retreat to be held May 1-3, and raffled a pass to the event. Maurice Brewster of Mosaic Global Transportation in Redwood City, Calif., was the lucky winner. After a Q&A, Spinning Wheels closed their event with a requisite site visit to the nearby Limousine Livery facility. This excursion provided an opportunity for the owners and general managers to see all aspects of another operation, and witness firsthand how a peer runs his business, from reservations and maintenance to administration and security technology. And Limousine Livery certainly impressed everyone with their high-tech, thumbprint-operated keybox that distributes keys to chauffeurs via bio recognition.

Another new Spinning Wheels member, Scott Tyler of EcoStyle Chauffeured Transportation in Raleigh, N.C., was enthused by his inaugural event. “Arthur really put together a great agenda and everybody received a tremendous amount of solid information from the daily sessions. I am very excited to be associated with such a fantastic group of operators who are willing to share the secrets and methods that help their companies succeed.” 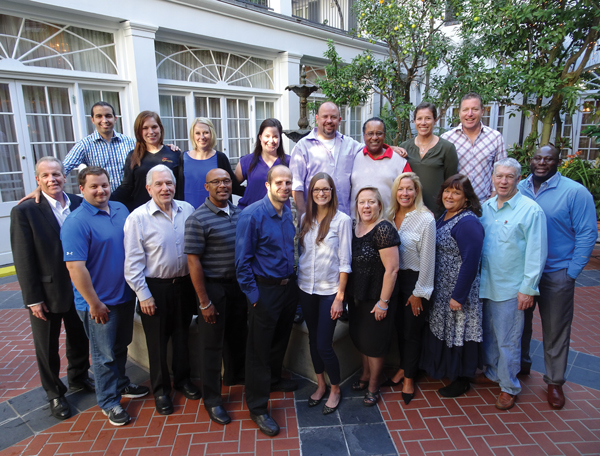 Members of the Going Global peer group. Back row (L to R): Sami Elotmani of Destination MCO, Stephanie Dunn of Best Transportation, Heather Allen of Network ­Transportation, Katy Urquhart of Limousine Livery, Keith Soraci of A1A Airport & Limousine Service, Johne Baker of Mosaic Global Transportation, Kara Raftery of Executive Limousine & Coach, and Driving Results Managing Director Arthur Messina. Front row (L to R): Stephen Ward of Above All Transportation, James Haiskey of Town & Country Limousine, George Jacobs of Windy City Limousine, Marvin Prince of LSA Worldwide, Umut Aslan of Men In Black Transportation, Ashley McMullin of GHL, Margaret Day of Reston Limousine, Jeanne Caputo of MTC ­Worldwide, Mary Beall of The Driver Provider, Mark Payne of Le Grande Butler, and Christopher Bell of AWG Ambassador. As the Spinning Wheels members left New Orleans, the participants of the two-day Going Global affiliate meeting arrived in town, including a surprise guest. Industry icon and Windy City Limousine owner George Jacobs stepped in to cover for his affiliate manager, Tricia Wilcoxen, who could not make the meeting, and his involvement, according to Messina, “brought a whole new dynamic to the group. Most people look at George and put him on a pedestal, but having him with the affiliate managers was a great experience for everyone.”

The meeting began on Thursday with an open group discussion and the introduction of new member Christopher Bell of AWG Ambassador in Las Vegas. Weiss returned for a Meet the Publisher session, and spoke to the affiliate managers about the latest industry forecasts and trends. This time, a pass to the 2016 Chauffer Driven Show in Washington, D.C., in October was won by Mark Payne of Le Grande Butler in Cincinnati, Ohio.

The day continued with talk about trade shows, where the face-to-face networking is of prime importance to affiliate managers. Messina facilitated a discussion that focused on getting the most from working partnerships and setting realistic goals. A particular emphasis was placed on representing your company and brand with professionalism, especially during the late nights common to the trade show experience.

Later, Going Global members headed to the New Orleans School of Cooking for their own team-building exercise and cooking lesson. Messina kidded that it was a “rare opportunity for affiliate managers to have their dinner prepared and served by industry star George Jacobs.” Jacobs loved the experience, and elaborated, “Being able to join the affiliate managers was a treat. I was able to learn a lot and reinforce relationships with them. These meetings are smart, and I appreciated the opportunity to learn some new things.”

The workshops concluded on Friday and were followed by a return to Limousine Livery for another open-house tour. Messina has already scheduled plans for both the Spinning Wheels and Going Global groups throughout 2016. Spinning Wheels’ fourth year of operation will see meetings in North Carolina in April, San Francisco in the summer, and a combination meeting/getaway in Puerto Rico late in the year. Going Global’s next get-together will be in Las Vegas this March, followed by a Boston trip in the summer, and a visit to Arizona in the fall.

Also for 2016, Messina announced the formation of two new peer groups. Global Partners, a second affiliate managers group run by Driving Results, has meetings scheduled for in April, August, and December; however, as of press time, there were only five spots remaining. The second new group, Wheels in Motion, will be dedicated to small operators to help guide them with best practices, quality control, customer service, and marketing. Contact Messina at arthur@drivingresults.org for more information. [CD0116]