Reaching Beyond Borders with Global Affiliates 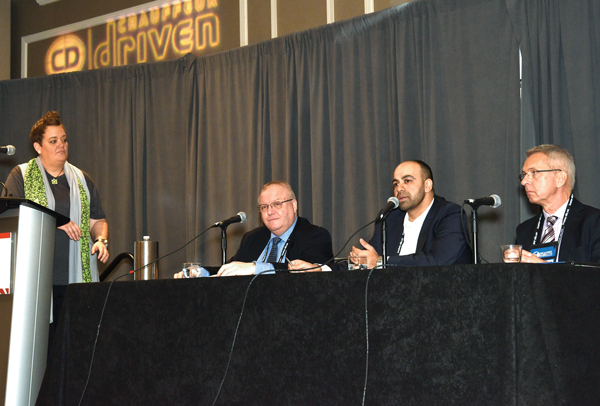 Like any large-scale industry event, one of the most prevailing benefits of attending the annual Chauffeur Driven Show is having much of the typically far-flung global chauffeured transportation world and its key players come together for several days. Such gatherings put the combined knowledge of nearly 2,000 industry professionals right at your fingertips.

Last fall, we capitalized on that intimate proximity to bring you “Beyond Borders: The Impact of the Global Business Landscape.” With a panel featuring Nadeem Ajaib of the United Kingdom’s Icona Global, Patrick Pierron of France’s Edward Limousines, and Ralf Rehder of the German Action Worldwide Limousines, plus frequent international traveler Kristen Carroll of The LMC Group serving as the session’s moderator, the hour-long seminar provided an eye-opening peek into the chauffeured transportation world from a Western European perspective.

It’s common knowledge that cultural differences, currency conversions, attitudes toward TNCs, and even seemingly standard client expectations are all variables from country to country. But the conversation quickly shed light on lesser-known idiosyncrasies punctuating the industry’s international landscape—starting with communication (or a perceived lack thereof) throughout the booking process.

“Typically if you’re a U.S. operator making a booking, you’re checking availability often for a client, checking with an international affiliate, and then going back to the client,” said Ajaib. “U.S. operators need some feedback: Is there a confirmation, is there a driver assigned, do we get their cellphone number, is the vehicle on the move, is it in position? But some operators outside the U.S. don’t work like that.”

“Typically if you’re a U.S. operator making a booking, you’re checking availability often for a client, checking with an international affiliate, and then going back to the client ... some operators outside the U.S. don’t work like that.”
– Nadeem Ajaib of the United Kingdom’s Icona Global

To reconcile European operators’ more taciturn approach to bookings with Americans’ tendency to find assurance in frequent updates, Ajaib has tweaked Icona’s booking process to better accommodate “cultural differences that exist in other parts of the world.” But he stressed that U.S. operators should be vocal about their expectations regarding elements like billing, contact information, and travel alerts at the very beginning of an international partnership.

“If those things are not clear at the outset when you begin your affiliate relationship, then there may be problems further down the line,” he advised.

Ajaib added that American operators are more likely to highlight fleet vehicles on their websites, whereas he has found more success in relying upon the word-of-mouth referrals his VIP clients and loyal customers provide. This ultimately places clients in an ambassador role to get the word out, verifying that the company delivers in ways a website can’t.

“You sometimes find you’ve got amazing websites, great pictures of vehicles, something that’s portraying a huge organization—that may be one person in their bedroom taking the calls and driving the clients and doing everything else,” Ajaib warned. “It’s a risky business if you’re going to base your judgment just on a website. I would recommend getting referrals and taking advice from people and friends in the industry who’ve actually experienced companies and their service.”

Serving as less of a warning and more of a clarification was the topic of tips, gratuities, and telling the difference between the two. The long and short of it? A gratuity tends to be included in the final bill and acts a safeguard of sorts to ensure that a chauffeur gets a slice of the pie while the customer gets the kind of service befitting a few extra Euros in their driver’s pocket.

A tip, however, Pierron defines as an “extra reward” on top of the 15 percent gratuity included in the service charge—and is more likely to be offered by tourists than corporate travelers, since the former are most often foreigners with cash on hand who are grateful for a chauffeur who doubles as a concierge.

“In Europe, I think we try to simplify: We generally have a flat rate and then we add VAT [Value-Added Tax] ... countries like Germany may not always include that final sales tax to the bottom line.”
– Patrick Pierron of France’s Edward Limousines

Rehder, however, has seen his chauffeurs feel slighted by American passengers who are frequently warned that it’s not customary to tip in other countries, but not assured that it’s still OK to fall back on their own impulses to do so.

“I often see this cultural misunderstanding,” he said. “When I get asked if gratuity is included, I tend to say it is but that drivers, of course, are happy to get tips.”

The uncertainty of tipping is just one cultural divide international operators have to bridge in terms of payment. Navigating rate structures and sheets, translating Europeans’ myriad approaches to them, and even the final total for services rendered is a common point of contention between operators from different countries—though the panelists felt that their countries’ more streamlined approach to tallying up the cost is actually easier to digest.

“In Europe, I think we try to simplify: We generally have a flat rate and then we add VAT [Value-Added Tax],” Pierron explained, noting that countries like Germany may not always include that final sales tax to the bottom line. “In France, we tend to include it because, generally, our American customers will ask what the all-in price is—they don’t want any surprise.”

Pierron added that, as a European operator farming out rides to his North American peers, he finds those add-on fees to be not only baffling but also potentially misleading.

“I have the example of Canada. We dealt with the airport fee, the GST, the PST, the TPS, the TVQ, the gratuity, you name it—and for us, it’s like Greek. What does it mean?” he asked with a chuckle. “The base rate looks attractive; but when you add everything, it becomes a big amount. Generally, I would say that dealing with international operators in that sense is easier because you’ll have a base rate and a certain amount of hours included when there’s like an hourly minimum, but there’s no big surprise.”

But when it comes to rate structures, Rehder freely admits that his country’s approach makes it “a complicated thing.” Rather than the straight airport transfers, rides that never leave a city’s boundaries, and comparatively less expensive fuel costs and taxes that North American operators are used to, the German rate structure is a three-headed beast. An hourly rate is charged if a ride stays within city limits and a by-kilometer rate is selected if a ride promises to be a long haul spanning 400 or 500 kilometers.

“When it comes to rate structures ... An hourly rate is charged if a ride stays within city limits and a by-kilometer rate is selected if a ride promises to be a long haul spanning 400 or 500 kilometers.”
– Ralf Rehder of the German Action Worldwide Limousines

“To make it even more complicated, we have to create a third rate system,” Rehder said, using the example of a long-distance transfer from Frankfurt to Stuttgart that spans more than 200 kilometers. “We are not able to express that in hourly rates because that wouldn’t make sense, that wouldn’t cover the costs. So we have these point-to-point transfers or long-distance transfers, which are then also calculated by a mix of hours and kilometers.”

Traveling between countries and juggling an array of different laws, regulations, and taxes as a consequence of it does create a bit of confusion for American companies. The panelists spoke of how driver accommodations, exorbitant costs of gas, and local context all present variables that prevent them from providing a neatly packaged hourly rate as a simple answer.

“People from the U.S. are asking, why can’t you give us an hourly rate if you’re going from city to city?” Ajaib said. “It’s very difficult in not only Europe but many parts of the world—sometimes you’re not leaving one city and going to another city, in a few hours you could be moved from one country to another country. In some cities, we have to pay for driver meals after a certain amount of time and, there’s driver accommodation if there’s overnight stays involved in continuous service. It’s not as straightforward as an hourly rate or an out-of-town hourly rate; there are lots of other factors that have to be taken into account.”

The panelists added that they rely heavily on their own trustworthy European and international partners to help them stay current on the ins and outs of foreign travel, as no one can attest to “local context” as well as those who are living it every day.

“Obviously, you cannot become an expert who understands what’s going on in each and every country,” Pierron said. “That’s why we also rely upon qualified affiliates to be the experts on their own countries. You rely upon somebody who’s trustworthy and won’t cheat you. There has to be a relationship of trust and confidence where you know this is an honest person. If I rely upon them, I have to know they’re going to take care of my clients—and not cheat me on rates.”

And while TNCs are posing a threat to the European chauffeur pool, Ajaib, Pierron, and Rehder agreed that they are not seeing their higher-end clientele make a mass exodus for cut-rate transportation. For those companies that are not content to trust their passengers in the hands of law-shirking, rouge drivers, they agreed referrals and trade shows remain one of the best ways to vet an overseas transportation provider.

“They give us an opportunity to meet face to face and then you get a feel about the person, how serious, dedicated, and trustworthy they can be,” Pierron said. “It means they’re probably more advanced in their practices than maybe smaller or newer operators. It means you already have an organization, you already are aware of the standard practices and procedures so you can even implement them within your own network and organization.” [CD0717]