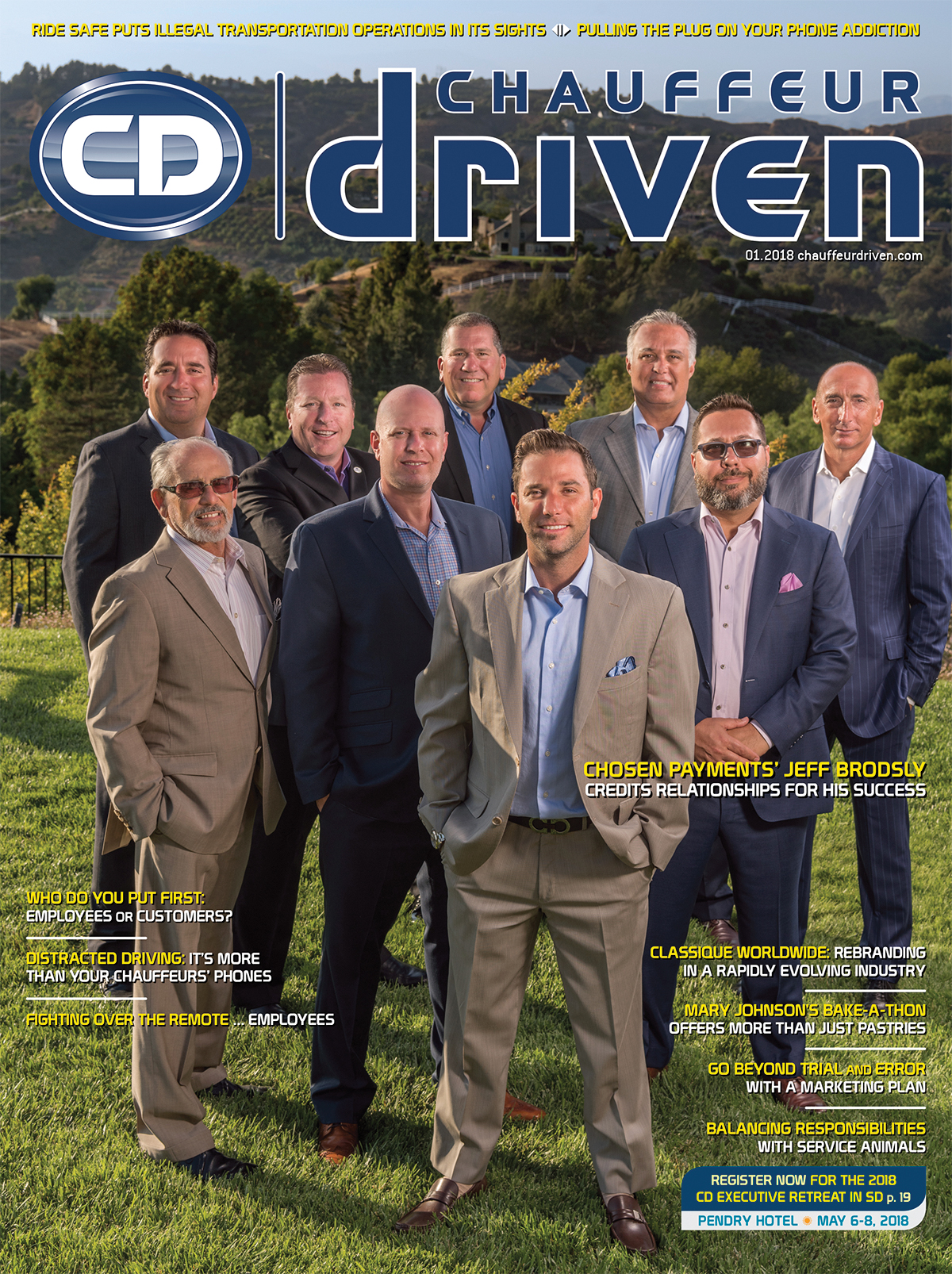 “I grew my business by creating friendships and partnerships with various players in the industry,” says Brodsly. “But it certainly wasn’t by design; like a lot of things in life, the pieces just fell together. This diverse group of people is all from different walks of life, they have different types of businesses, and live in different areas of the country. But, their core values are similar to mine when it comes to business and personal relationships: integrity, loyalty, and doing the right thing.”

While Brodsly quickly acknowledges that he has far more close professional partners than can fit on a single magazine cover—not to mention that two of his closest industry friends, AJ Thurber of Grech Motors and Jon Epstein of Royal Coachman Worldwide, were unable to make the shoot—this group represents those in ground transportation who have acted as a positive influence on him, whether as a mentor, partner, advisor, or just a friend.

“Instead of having a cover focused solely on Chosen, it felt like the right time to thank those who have given me guidance along the way,” he says. “Each of these guys know the real Jeff Brodsly. These partnerships were not built on business; they were built on trust and friendship. And I think that’s the best way to do business because it’s organic. It’s not forced. It’s more about helping each other.”

Brodsly is a firm believer in the power of creating close, loyal partnerships when it comes to growing a business, which is notably effective in such a highly collaborative industry like chauffeured ground transportation. In his experience, it’s vital to see your company not just as a means to generate income, but as a relationship-building platform.

“I admired that he wasn’t pushy or aggressive. When we started seeing how much he was giving back to the industry, we decided to give him a shot.” – Ron Stein of Exclusive Sedan Service

When he was a rookie in chauffeured ground transportation a handful of years ago, Brodsly felt that success was against the odds. He had virtually no connections in the biz, and is quick to joke that he didn’t know the difference between a stretch limo or a Sprinter. 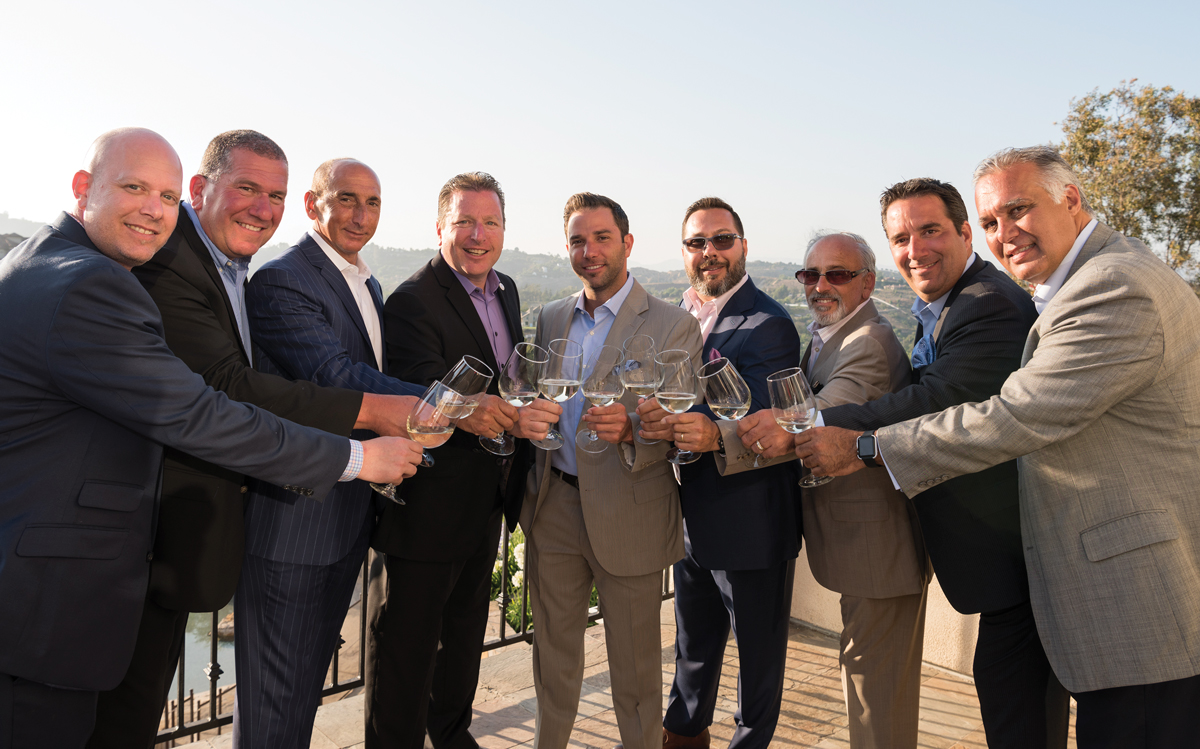 L to R: CD Publisher Chris Weiss, Alan Candeub of Park Avenue Limousine, Brett Barenholtz of Boston Car Service, Arthur Messina of Create-A-Card, Jeff Brodsly of Chosen Payments, Joe Magnano of CLI Worldwide, Ron Stein of Exclusive Sedan Service, Joe Gulino of Gem Limousine Worldwide, and Kevin Illingworth of Classique Worldwide Transportation “I sat back and got to know who’s who, and developed a rapport with other vendors, namely Arthur Messina and Chris Weiss. In the beginning, I asked a lot of questions, ran ideas by them, and picked their brains. Since, as vendors, we have the same clients and target audience, I realized that if I could learn to appeal to the clientele in this particular vertical market, I’d be more successful.”

“Jeff took an immediate interest in the industry, and we helped him brand himself,” says Messina.

Through the mentorship of his vendor partners and the warm introductions they offered, it wasn’t long before Brodsly was able to make not only connections but also friends with many in the industry.

Stein was one of Brodsly’s early acquaintances, and was immediately impressed by the professional manner with which he introduced his company to the transportation space. “When Jeff was first entering the industry and trying to promote his processing, we were working with someone else. But he was very respectful of that, and I admired that he wasn’t pushy or aggressive. When we started seeing how much he was giving back to the industry, we decided to give him a shot.”

“Jeff’s a sponge. He’s learned about our industry—and I know he’s done this for other industries as well—and sees what’s important to people and becomes part of it.” – Brett Barenholtz of Boston Car Service

Barenholtz shares a similar sentiment: “We became friends two or three years before we even started working together. We hit it off and would socialize and talk business, but it was never about his doing processing for us. Jeff’s a sponge. He’s learned about our industry—and I know he’s done this for other industries as well—and sees what’s important to people and becomes part of it.”

Credit card processing is a competitive business, and Chosen Payments has taken a proactive approach in its marketing; the company’s sales team pounds the proverbial pavement, but Brodsly and his marketing team work hard to ensure that their focus is on shaping a brand that people can trust.

“I look at the relationships I’ve formed as true partnerships—they’re not simply a client,” he insists. “If you’re a two-car operator or a 200-vehicle company, the relationship that I have with each is the same. It’s a dichotomy, we’re aggressive in getting our name out there because of the cutthroat nature of my business, but when it comes to building relationships, it’s the opposite.”

To say that Brodsly and Chosen Payments found footing in the ground transportation space is a bit of an understatement. The CEO and his team are well-known, and equally well-regarded, figures within the industry. They are a ubiquitous presence at trade shows, events, and, most notably, association meetings. Since Chosen Payments entered the industry, Brodsly has been extremely active in both regional and national associations, giving back thousands of dollars each year to the organizations in the form of sponsorships, fundraising, rebate checks, or through paying dues for Chosen Payments’ clients. Brodsly currently serves as the 2nd vice president for two of the industry’s leading associations, the Limousine Association of New Jersey (LANJ) and the Greater California Livery Association (GCLA). He also sits on the board of directors for the New England Livery Association and the advisory board of the Minority Limousine Operators of America. Meanwhile, Chosen’s Marketing Manager Jim Luff is on the board of the Arizona Limousine Association, and VIP Client Relationship Manager Sarah McKee serves on several boards, including the Colorado Limousine Association and the Illinois Limousine Association.

“His participation on the LANJ board is invaluable ... When we do business with vendors and they participate in our causes, it’s important to us.” – Joe Gulino of Gem Limousine Worldwide

“These aren’t paying jobs; it isn’t fun to man a nonprofit that requires tons of hours for charity and fundraising, regulations, and membership benefits,” Brodsly says. My drive and dedication is to really just help. I do it because I believe in the values of the associations.”

Brodsly’s dedication to the industry’s associations is valued by his friends and colleagues. “Jeff and I clicked almost immediately, and in one of our early conversations, I suggested that he and Chosen join and get involved in the grassroots efforts of our industry associations,” says CD Publisher Chris Weiss. “He took that advice and ran with it, quickly becoming an asset and part of the solution. And to see Jeff voted in as 2nd vice president of two of the industry’s leading associations not only made me extremely proud, it is a true testament of his dedication to this industry and all of its important causes.”

“His participation on the LANJ board is invaluable,” adds Gulino, a LANJ board member. “His expertise is appreciated and he has a lot to bring to the table. When we do business with vendors and they participate in our causes, it’s important to us.”

“His strength, in regards to the industry, is that he’s willing to give back,” adds Messina. “While he makes money from the industry, he doesn’t keep the whole pie; he gives back in many different ways, namely time and money.”

This is echoed on the West Coast by Brodsly’s long-time friend Magnano: “When it’s fundraiser time, Jeff is on the phone getting everyone to participate. He has staff and employees that could do this for him, but he’s the one on the phone saying ‘Guys, we need to raise money. What can you do for us?’ He’s as passionate about this industry as we are, and he doesn’t even own a single car.” After finishing what Brodsly calls Chosen Payments’ most pivotal year, he is looking forward to what 2018 has to offer his company and the industry, particularly with all the consolidation and changes. The time is right, he believes, for any operator willing to work hard, adapt, and forge new relationships to expand their enterprise.

“The advice I have is to simply get out there. If you aren’t accustomed to meeting new people, get comfortable with being uncomfortable. Become part of an association, be part of trade shows, attend networking groups, join a 20-group. Make friends. Put your guard down. Ask questions. There’re so many bright people that have made it in this industry, and they’re so full of knowledge and ready to share it. If there’s someone you can learn from, hit them up on Facebook or LinkedIn. You’ll get a positive response.”

And while Chosen Payments continues to grow in other vertical markets, including the medical, jewelry, funeral care, and hospitality industries, chauffeured ground transportation remains special to Brodsly.

“This industry is a very close-knit and fun. There’s a reason why I’ve invested this much time, money, and sweat equity ... I have a really good time doing it. And where else can you say that you make money by saving people money?” [CD0118]