By now, TNCs are a worldwide phenomenon. As is the case with any sector dominated by stranglehold chains and franchises, it is difficult for smaller businesses to compete with internationally instant name-brand recognition—difficult, but, as our resilient industry has been proving time and again, not impossible.

It takes time to chisel away at a monolith; it also requires an array of approaches to come at an ever-broadening problem from countless fronts. As the likes of Uber and Lyft encroach on different markets at different times and with different tactics, operators in each of those regions have had to simultaneously look at how other regions’ ground transportation companies responded to see what kind of precedence was in place while also keeping in mind their own markets’ unique components that influence either the growth or containment of an unwelcome but increasingly popular intruder. 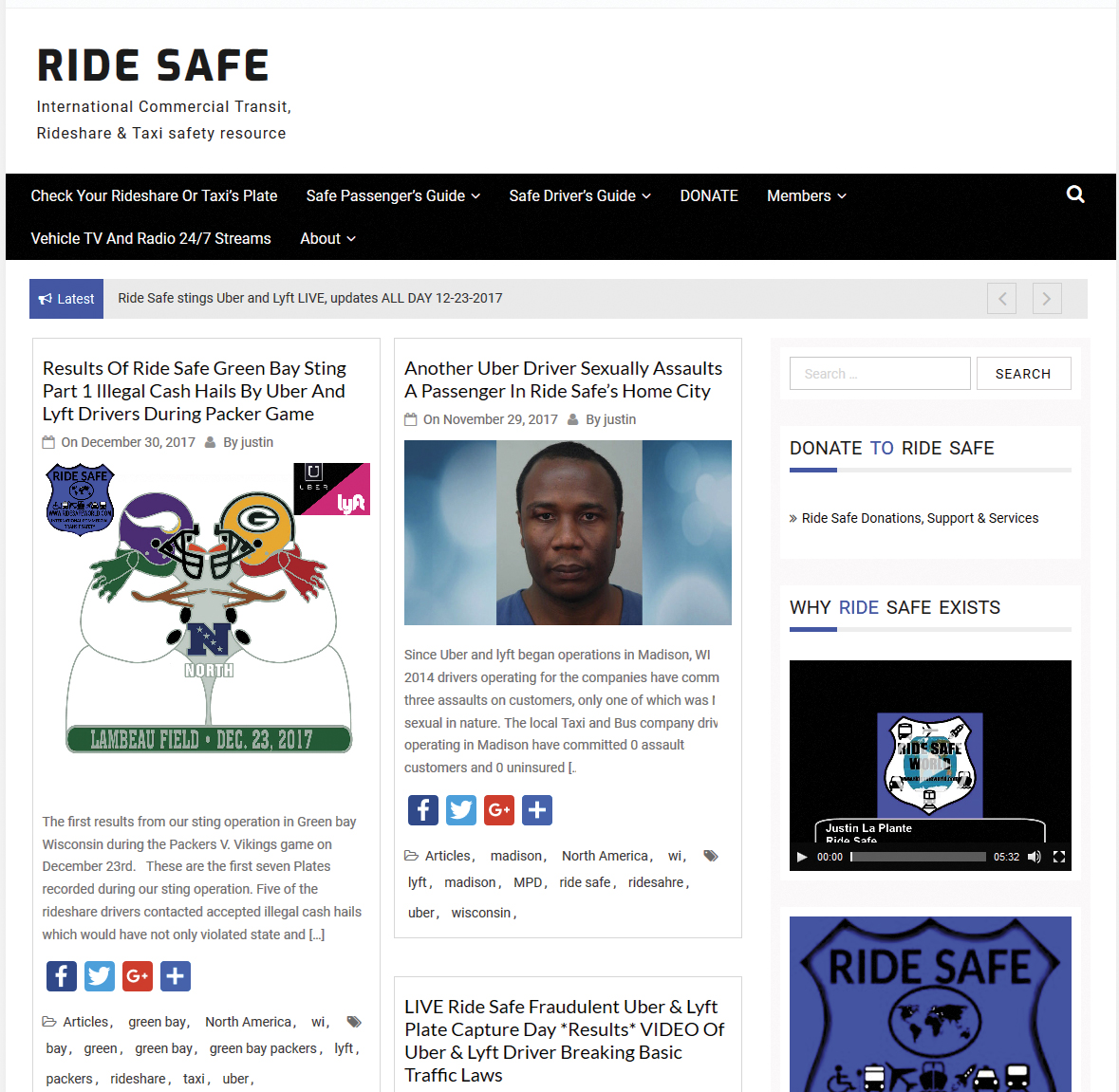 Wisconsin might seem like an unlikely candidate for the next battleground state, but with its fiercely loyal sports fans dutifully migrating to the Green Bay Packers’ Lambeau Field by any means necessary throughout the football season, comparatively recent infestations of Uber and Lyft drivers, and a trio of Uber-friendly politicians who wield considerable power in American politics (Representative Tyler August, Governor Scott Walker, and now-Speaker of the House Paul Ryan; Uber has reportedly spent an estimated $2.6M lobbying to Wisconsin’s officials), its role as a keystone state for TNCs becomes all the more apparent—and dire. And that’s where Ride Safe comes into play.

For nearly two years, Ride Safe has been aggressively reporting vehicles and drivers operating without the proper commercial licenses. Its founder, Justin La Plante, focuses on Uber and Lyft drivers—“if SideCar, Amazon Flex, or Juno were operating here, we’d go after them, too,” he says—by checking their plates against open-record searches and then reporting the findings back to the appropriate TNC platform upon proving that there’s no commercial operating allowance on the vehicle in question.

“It’s our intention to not just monitor problems caused by rideshare companies: We’re going after anybody who’s out of line.” –Justin La Plante, Founder of Ride Safe

So far, he and Ride Safe have gotten more than 80 Uber and Lyft drivers removed from the roads. But La Plante says that it could be easily 10 times that amount if he only had the manpower to report more.

“It is very easy to get Uber and Lyft vehicles off the road,” he notes. “Typically, what either company will do is immediately take that driver off the platform. The person driving for them has already signed away arbitration so it’s a simple matter. It doesn’t matter what reason they pull you for, they can do it at any time. The driver just has to submit and take it.”

La Plante founded the Ride Safe website (ridesafeworld.com) in April 2016 after having already exited the taxi world. Before getting the idea to establish a centralized reporting website (which now also runs news and updates related to the dangers of TNCs), he would go to city council meetings to report fraudulent or swapped plates.

“It was a fairly common thing even then,” La Plante says. “One out of maybe every 120 vehicles was using license plates that were either faked or switched with another vehicle.”

The vibrant college scene in Madison, where La Plante is based, fuels the demand for ride-sharing services; those same services’ notorious refusal to abide by the traditional rules, licensing, and safety regulations only kept their pockets lined—and began to exacerbate the problem of supposedly above-board operations figuring out that they could get a bigger slice of the pie if they, too, eschewed the rules.

And while La Plante works with the likes of the Wisconsin Limousine Association—which he says gave Ride Safe its first big donation—and the Wisconsin Association of Taxi Owners, he is somewhat hesitant to get too directly involved in other transportation organizations since seeing an uptick in non-TNC vehicles falling out of regulatory compliance.

“It’s our intention to not just monitor problems caused by rideshare companies: We’re going after anybody who’s out of line,” La Plante explains. “Even if Uber and Lyft were to go out of business tomorrow, we’ve found that they have created an additional market of illegal taxis. Before, you had maybe fewer than 10 vehicles in any given city that weren’t properly registered or some guy who just decided to start calling himself a cab company. Now, I’d say there’s three times that because people are looking at what Uber and Lyft started.”

Keeping TNCs accountable and transparent to the public beyond Wisconsin is a huge part of what Ride Safe does, too. The “Safe Passenger’s Guide” section on its site documents questionable business practices on both Uber’s website and during rides; there is video of an Uber lobbyist testifying that she is not an Uber employee even though her own public employment records indicate that she worked as the company’s public policy associate. But the biggest success for Ride Safe, according to La Plante, is the increased exposure it gives to what he calls TNC’s “driver purges.” For example, when Colorado booted thousands of drivers in late September, one of its top-rated drivers was among them—and she took out her indignation in a 10-minute YouTube site. A quick Google search of her name indicated that she kidnapped two men at gunpoint in the ’90s, further proving that the TNC’s background checks are anything but thorough.

Through Ride Safe, he continues to track where especially Uber’s money is spent politically while also conducting sting operations. The first was right before Christmas, with La Plante performing his “first fully equipped and funded sting operation in Green Bay during the Packers game.” As Ride Safe expands beyond The Badger State, it is La Plante’s hope that this yields “essentially the first filming being done in a documentary I would like to produce after I complete operations in more major U.S. cities.” A short video on the Ride Safe site shows the effort’s “immense” success.

“We recorded several uninsured Uber and Lyft vehicles performing illegal street and cash hails and also exposing a fraudulent “safe ride” operation,” he says. “This involves 14 continuous hours of filming and recording so we can finally show everyone the process we go through on these sting operations, the plate checking process, and the final reporting process.”   [CD0118]