Legal Ease: Balancing Your Responsibilities With Service Animals in Vehicles and the Workplace 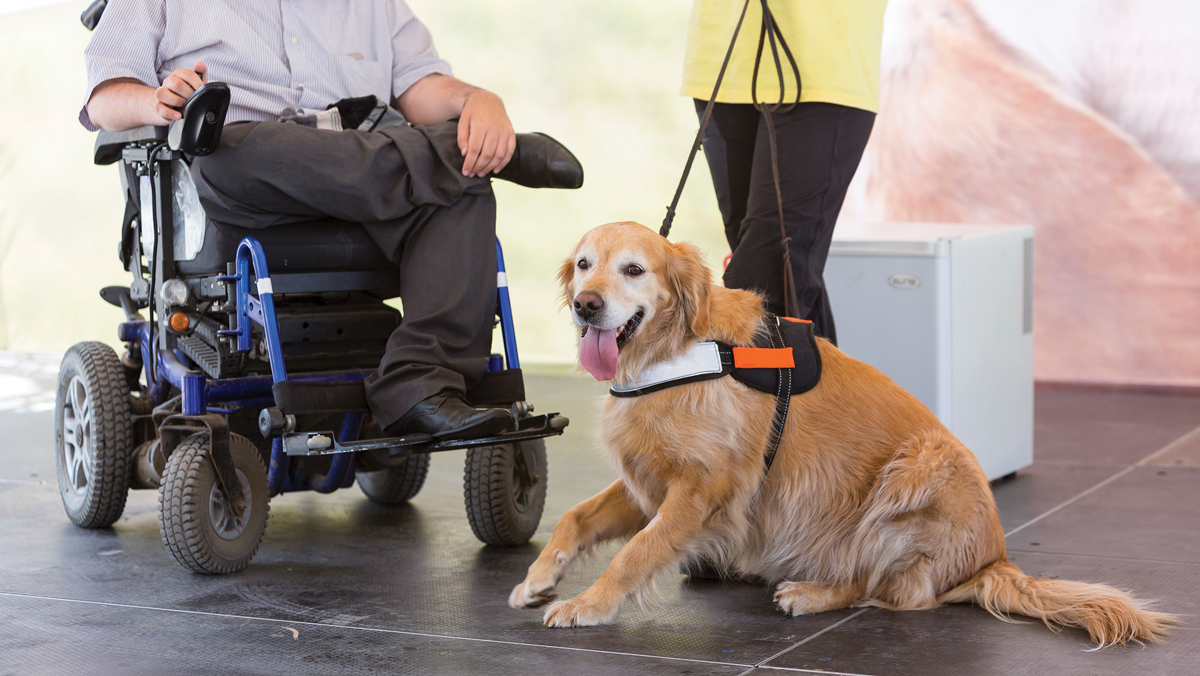 Every transportation provider knows that they are required by law to accommodate people with disabilities. It is unlawful, for example, to refuse service to a passenger due to the fact that he or she uses a wheelchair, needs an oxygen canister, or is accompanied by a service animal. The same holds true for employees of your company who may require such accommodations (or other reasonable accommodations) in order to perform the necessary functions of their job.

The laws pertaining to the accommodation of people with disabilities are relatively straightforward, as are the laws covering service animals. In brief, you must accommodate a disabled person with a service animal when they travel in your vehicles or when they work in your office. Less clear, however, are the obligations that a transportation provider or employer has to someone with an emotional support animal.

“An emotional support animal is for all intents and purposes the living equivalent of a teddy bear or a security blanket ...”

There is a fundamental difference between a service animal and an emotional support animal. Service animals are dogs that have been specially trained to perform specific tasks, such as guide a blind person across a street, open doors, detect seizures, and alert their hearing-impaired owners to potential dangers, for example. Thanks to their training, they are typically very well behaved. (It’s important to note that it is actually unlawful to interrogate someone with a service animal, ask for the animal’s certification, or ask the person about their disability. In fact, you can only ask two questions: “Is the animal required due to a disability?” and “What tasks has the animal been trained to perform?”)

An emotional support animal is for all intents and purposes the living equivalent of a teddy bear or a security blanket, and most have little if any training. In theory, emotional support animals are companion animals that a medical professional has determined provides benefits for an individual with a disability. In reality, the animal is oftentimes just a pet fitted with a vest (available on Amazon and other websites), and/or a certificate or other false credentials purchased for a nominal fee online.

People have been getting away with indiscriminately labeling their pets as support animals thanks to widespread public confusion over what the laws cover as well as some people’s misconception that a service animal and an emotional support animal are one and the same. These abuses are truly unfortunate because when incidents occur (as they invariably do when untrained animals are brought into unfamiliar public surroundings), they tend to portray not just emotional support animals, but service animals as well, in a poor light.

“Due to the uncertainty of what an emotional support animal is for purposes of ACCA, airlines have generally permitted a wide range of creatures to fly out of fear of lawsuits.”

The key to making sure you comply with the law while not being taken advantage of by people with pets masquerading as emotional support animals is becoming informed as to what the laws do and don’t require. Chief among these is the federal ADA, although there are a host of other applicable state and local laws, rules, and regulations such as those promulgated by the TLC. Under Title III of the ADA (which prohibits disability discrimination in places of public accommodation, and in services operated by private entities), disabled persons who rely upon a service animal are allowed by law to bring it into, among other places, stores, restaurants, offices, taxis, limousines, and buses. Title III does not, however, provide such protections to people who rely upon emotional support animals. In fact, the ADA does not consider an emotional support animal of any sort to be a service animal. Thus, you can legally refuse to permit an employee to bring their emotional support cat, rooster, parakeet, goat, etc. into the office, and you can likewise legally refuse to permit passengers to travel in your cars with such animals.

Whether that’s a good idea is a judgment call. You can have, on the one hand, model employees and/or good customers who find comfort in an emotional support animal. Keeping them happy has to be balanced against the risk of, for example, the animal biting or scratching someone, soiling office carpets, damaging the leather seats of one of your vehicles, and so on. Whatever you decide, consistency is important. It’s never a good idea to accommodate one employee or customer’s request and not another if circumstances are similar, as doing so could result in the denied animal owner claiming his or her request was denied due to discriminatory reasons.

Formulating policies that clearly spell out what the company will and will not permit goes a long way toward avoiding problems. When it comes to true service animals, customers traveling with them should always be allowed to do so. A policy that informs your chauffeurs that service animals are welcome can reduce the likelihood of ADA violations, and possibly soften the blow should one occur.

As for the office, while you can sometimes get around permitting a service animal in the office, legally doing so requires a very strong showing of hardship; a showing that is oftentimes difficult if not impossible to meet. A properly drafted policy should convey that employees having service animals will be accommodated provided information is provided describing how the animal assists the employee. The policy should also require that the service animal be properly immunized and in good health, properly licensed, restrained (unless the disability dictates otherwise), and kept within the employee’s control at all times. The policy should further state that the employee is responsible for the animal’s care and supervision, and for the disposal of animal waste. Lastly, the policy should condition the animal’s presence upon it behaving reasonably while on the company’s property.

When it comes to emotional support animals traveling in your cars, as I mentioned above you need to balance whether the benefits (e.g., keeping customers happy) outweigh the risks (damaged or soiled interiors, a comp claim if a driver is nipped, etc.). In the office, if emotional support animals are permitted, accommodation requests should be analyzed in much the same manner that requests to bring service animals to the office are analyzed under the ADA. If a request can be accommodated without undue hardship, the request should generally be honored.

Until the laws are amended to curtail the epidemic of people labeling their pets as emotional support animals and bringing them into restaurants, supermarkets, and yes, even limousines, we can expect to see more so-called support animals wherever we go. Formulating policies in advance will go a long way in assisting your chauffeurs and managers in making the proper decisions when they are put on the spot by an employee asking to bring their emotional support chicken to work, or a customer and his support pig waiting to get into one of your company’s new luxury sedans.   [CD0118]

Roberta Pike is a Partner with Pike, Tuch & Cohen Law Firm in Bellmore, N.Y. She may be reached at rpike@ptcllp.com.