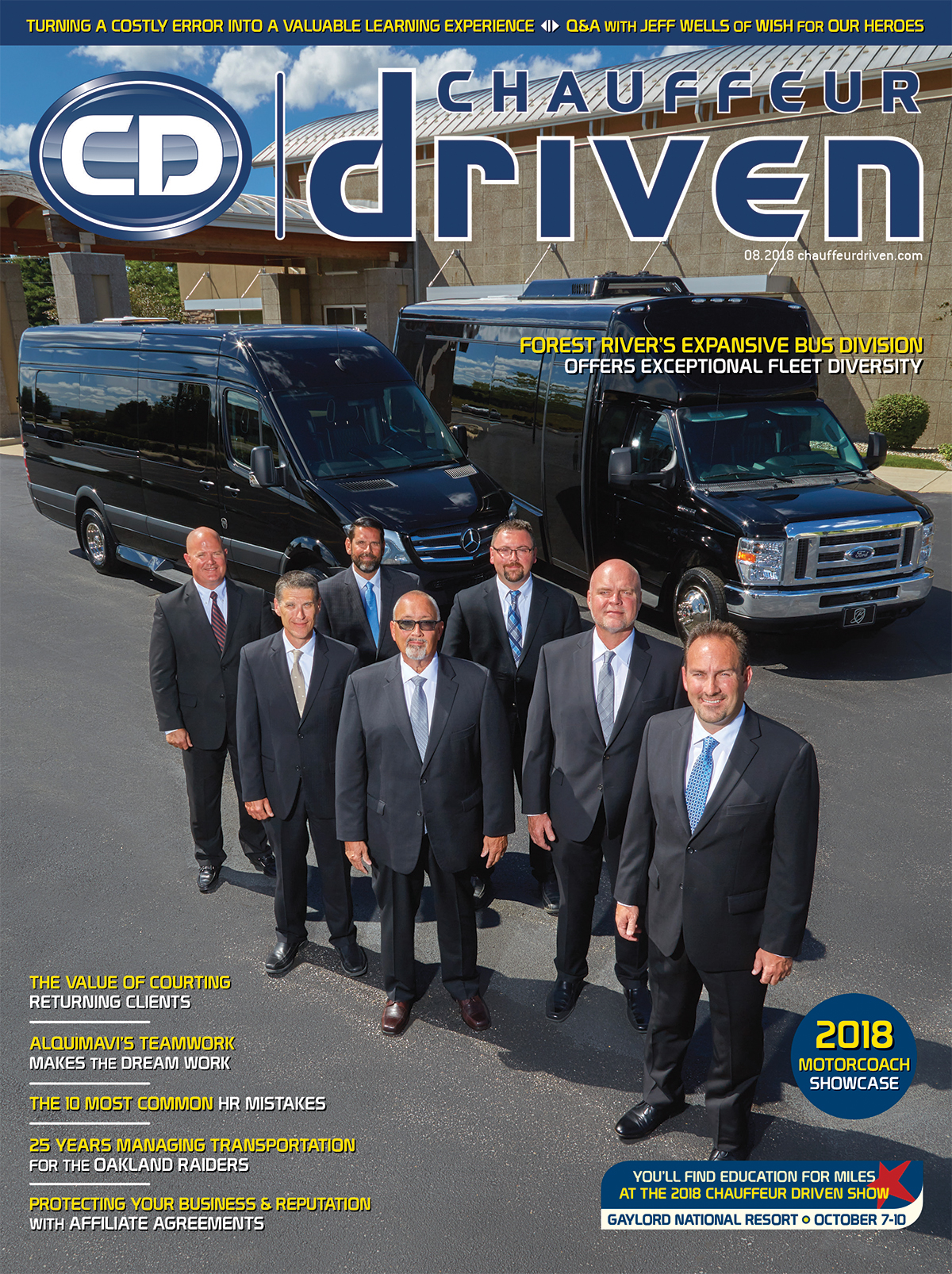 Cover Art: Forest River’s bus division leaders at the company headquarters in Elkhart, Ind. (counterclockwise from front right): Bus Division President David Wright, Director of Operations Dave Balentine, General Manager of Battisti Customs Bill Battisti, General Sales Manager of Starcraft Bus Jay Nine, General Manager of Berkshire Coach Troy Snyder, General Sales Manager of Glaval Bus Scott Mamone, and General Manager of Elkhart Coach Tony Cundiff. Photography by Bryan Chris. Forest River, a brand that began as a recreational vehicle manufacturer in 1996, has grown into one of the largest families of bus producers in the country—and is only getting stronger. In the past few years, the company has not only acquired commercial bus producer, StarTrans, and luxury custom builder, Battisti Customs, but also launched top-of-the-line Berkshire Coach, which has the backing of Berkshire Hathaway. The company announced this summer that it was adding another 300 jobs to the Elkhart, Indiana, economy as it continues to expand. We spoke with David Wright, Forest River’s bus division president, about what’s new with Forest River and why the company is so strong.

Chauffeur Driven: When people think of Forest River, they often think about what the brand is most famous for: outdoor recreation. How do buses fit into founder Peter Liegl’s vision?
David Wright: Starcraft was Forest River’s first bus company acquisition, which Liegl purchased in 2001 just 10 days before 9/11. He saw that it could be a good volume market and was a strong industry in the U.S. A year later, he purchased Glaval Bus, which was right around the time that I joined Forest River. It gave him an opportunity to diversify from RVs, which is the lion’s share of Forest River’s business. A few years later, he followed with Elkhart Coach and more recently with StarTrans Bus, and then Battisti Customs a little over a year ago. We also recently launched Berkshire Coach. We also have a boat division, as well as cargo trailers and box trucks, so we’re a well-diversified business.

CD: We’ve seen a lot of consolidation recently on the manufacturing side. What do you think is precipitating this, and is it having any impact on the products available to the market?
DW: I think there are a number of reasons, including that companies want to keep growing and are doing so through acquisitions. But there’s an obvious benefit to this as well: Size and being able to scale the costs factor into that. Although there has been consolidation, if you look out across the entire shuttle bus industry it seems that the number of brands has remained about the same or possibly even increased. I don’t think it has affected product availability or diversity at all. Consumers are demanding better quality and better value, so I think it’s a good thing that companies on the manufacturing side are getting bigger because the more financially sound the company, the better the products will be that they produce. Ultimately, it’s a benefit for the industry. 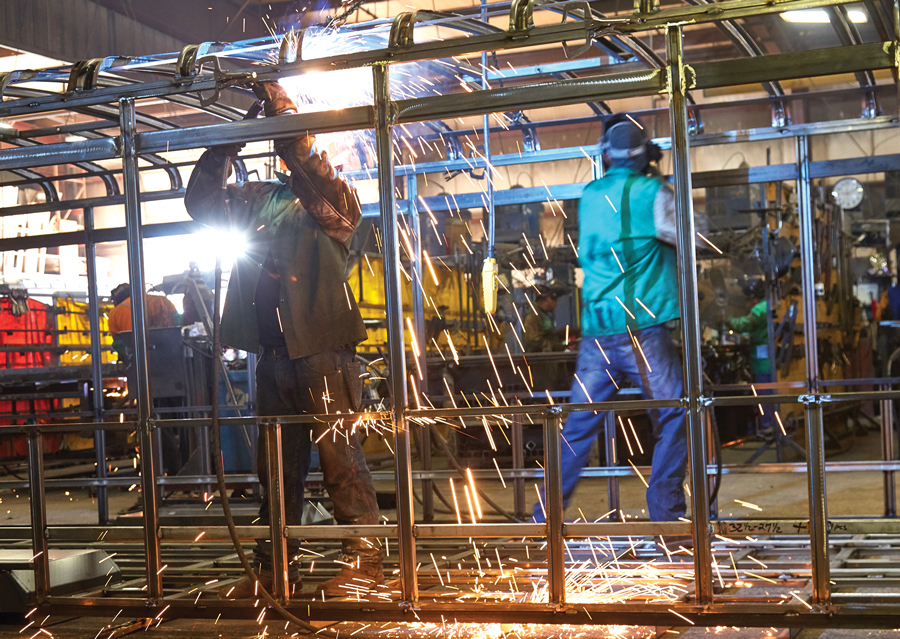 CD: You’ve also added some familiar names to the bus lineup, like Battisti Customs. How do they all fit under the Forest River umbrella?
DW: If you look at our bus divisions, each one concentrates on a slightly different market with some overlap. For example, Elkhart Coach—which certainly builds a lot of buses for the retail market—is also very strong in the transit market. While they have less product variety, what they do they do very well. In addition, they just moved into a new facility in the past six months to keep up with demand. Then we have Starcraft and StarTrans buses, which are a mix of retail and FTA-funded transit buses with a wider breadth that meets a certain niche. We have Glaval, which is a higher-end bus that can be customized and is just a step above an Elkhart or Starcraft bus. And, of course, we believe that Berkshire Coach is one of the top bus brands on the market, where its numerous options are now standard. This eliminates the many decisions customers previously had to make when ordering a luxury bus. Berkshire Coach also provides the longest warranty in the industry. Finally, Battisti was a great acquisition for Forest River because so many of our dealers were asking for unique customization, from mobile medical units to luxury limo buses. When we had the opportunity to meet with Bill [Battisti] and Carl [Hazzard] of Battisti, we realized it was just the perfect fit for those specialty vehicles that customers were requesting. I can’t say enough about how well it’s worked out for our customers and Forest River.

CD: What links them uniquely as the Forest River brand?
DW: All Forest River products have this in common: durability, safety, and value. Even though our vehicles are on different levels and used for different purposes, we have that standard across the brands. Dealers and end-users alike want a bus that’s durable. It has to last; it has to be in the same shape years down the road as it was coming off the product line. Safety is also a top priority: We were one of the first companies to make seat belts standard even though they are not required on buses less than 26,000 pounds. As far as value, some people think value is synonymous with “inexpensive” but that’s not what it means to us. If they are purchasing a Forest River product, they are getting the most value and the best possible bus for their investment. 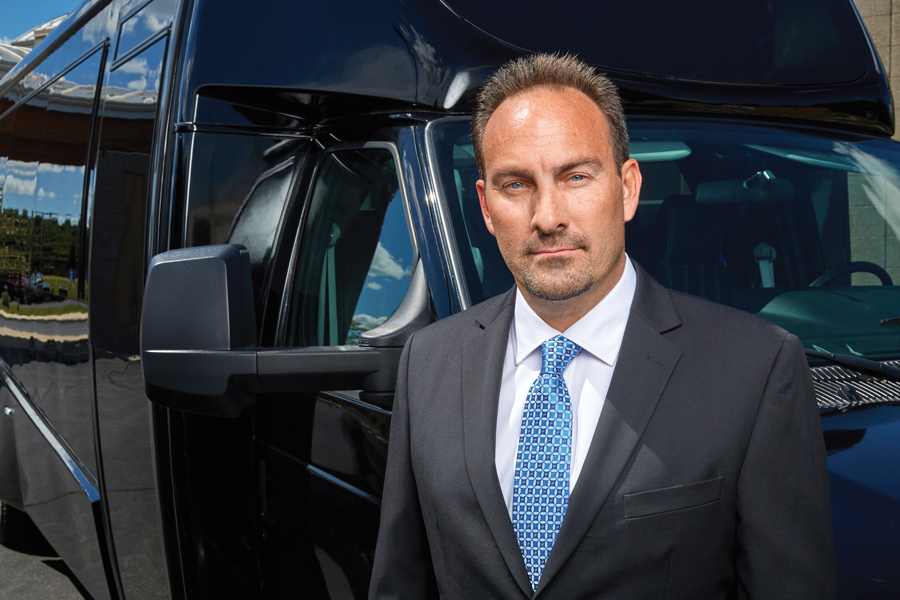 Bus Division President David Wright CD: What are some of the most frequent questions or concerns you get from operators looking for a bus?
DW: Capacity is always the biggest issue. What is the cost per passenger compared to their other vehicles? Whether they’re buying a Berkshire or one of the smaller, less expensive buses, they want to know the dollars and cents of how the vehicle will be used as part of their service. Another place where we’ve seen a tremendous amount of growth is in the more functional shuttle buses for those customers who aren’t going to black-tie affairs. Generally, these customers will already own the higher-end luxury buses in their fleet but need one or two solid, well-built buses that can be used for fixed route or less luxury-type transportation.

CD: Which vehicles are most popular with our industry?
DW: By far, I would say Starcraft’s Allstar. There are more Allstars built on the Ford and Chevy chassis than any other particular bus in the country. Overall, most of those in the market for a bus are looking for one between 14 and 28 passengers, and all of our brands build several in that range. So many in the industry are looking for this type of vehicle to complete their fleet lineup because of the diversity of transportation choices their services offers.

CD: Do you sell factory direct or through dealers?
DW: Our dealer network is extremely important because we do not sell direct to the end-user. Our dealers are our biggest asset: They are experienced, financially sound, stock the right products, and can help a customer with a custom product if needed. We want to make sure that the end-user is taken care of, which is why we vet our dealers so rigorously. Although our goal is always to build the best bus possible, eventually you are going to need service. We take it very seriously that it’s fixed right the first time and back on the road quickly through our dealers and authorized service centers across the U.S. We know that time off the road is time that an end-user is losing revenue. Besides, it’s much easier and smarter to keep a customer happy who currently owns our product than it is to find a new customer. It’s not just about pride in our build, but that our end-users are satisfied with their purchase through the lifetime of ownership. 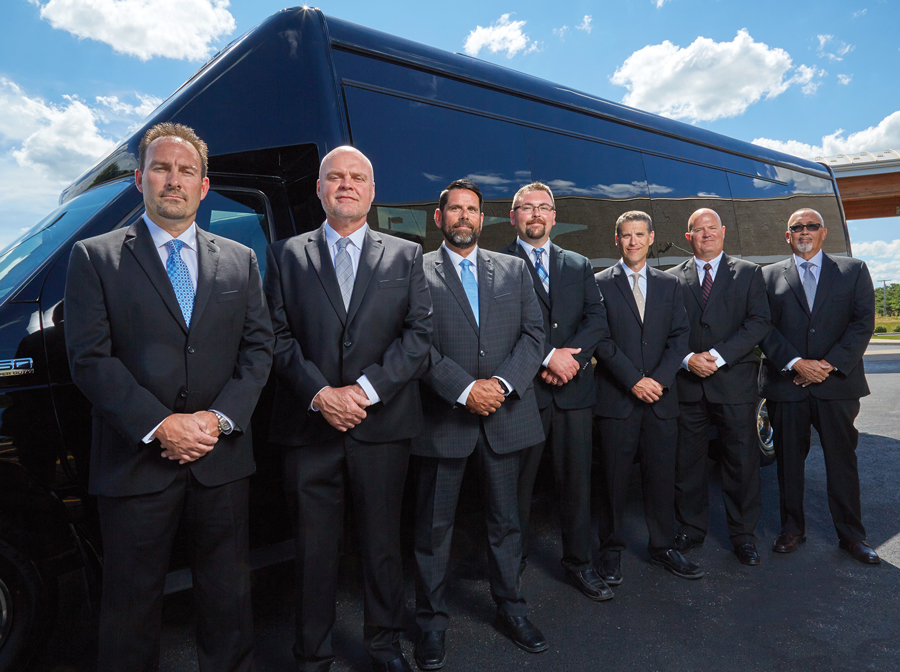 L to R: Bus Division President David Wright, Director of Operations Dave Balentine, General Sales Manager of Starcraft Bus Jay Nine, General Manager of Battisti Customs Bill Battisti, General Sales Manager of Glaval Bus Scott Mamone, General Manager of ­Berkshire Coach Troy Snyder, and General Manager of Elkhart Coach Tony Cundiff CD: Forest River has a strong network of operator fans through the Owners’ Group. How did that come about?
DW: It’s something that Peter Liegl, our founder and CEO, came up with a few years back. People really love their Forest River RVs and are invited to join us at the fairgrounds in Elkhart County once a year where they can meet other owners, provide some direct feedback to us for how we can improve our products, and enjoy a tour of our facilities. It sells out every year and just gets bigger and bigger each time.

CD: How do you engage with your bus customers?
DW: We, of course, get a ton of feedback from our dealers, who are constantly offering suggestions for improvements they have received directly from their customers. We also use several national events like the Chauffeur Driven Show to interact directly with our bus end-users. The other place we have that engagement is through our customer service department. We are continuously analyzing what’s working well and how we can strengthen our products.

CD: You’ll be on our show floor at the CD Show this October. What vehicles can we expect to see?
DW: You’ll definitely see Berkshire products at the show, but also a complementary lineup of all of our products that relate to this industry. One of the things we are really excited about is our new U42 Berkshire Coach, which has a high passenger capacity and is built on a Freightliner chassis with all the luxury amenities you need. We believe the U42 will be very well received.