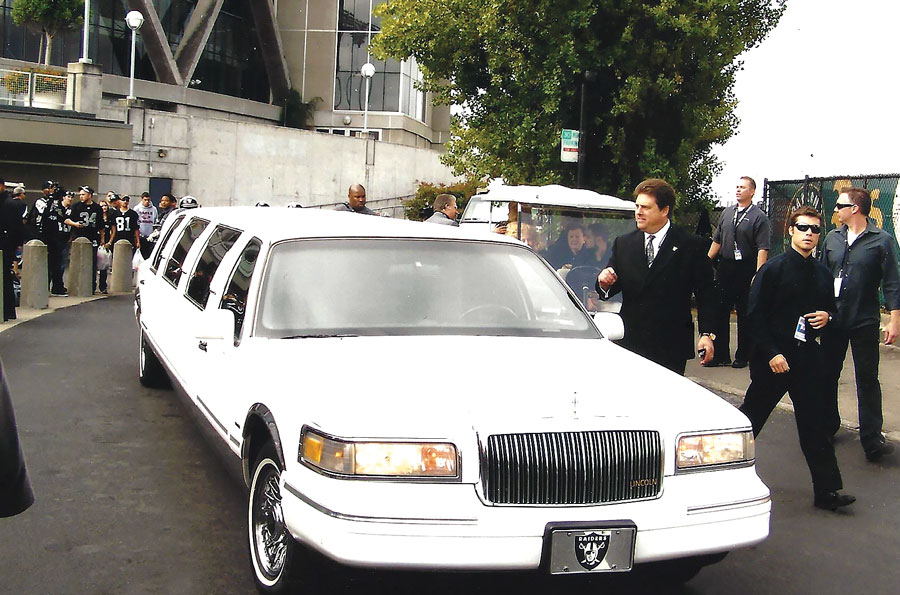 David Hartson (next to his limousine) on game day I started in the chauffeured transportation industry in 1988 when I founded Park Avenue Limousine in Pleasanton, Calif. My staff and I worked hard, were always on time, and the company grew from two cars to more than 20 by 1997. That same year, I was honored to be named the Operator of the Year runner-up by the National Limousine Association—I felt that I had done well enough to apply for that award. I gained accounts and service was great for our happy customers. I was proud of what I had built.

In the early ’90s, there was talk of the Raiders—who then played in Los Angeles—moving back to their original home in Oakland, which was a dream come true for a lifelong Raiders fan like myself. Growing up in the Bay Area, my father would take me to Raiders games, as he was a season ticket holder in the ’60s and ’70s. I remember when the Oakland Coliseum opened, and walking through the mud to sit in the bleachers to watch a game. At 6 years old, I could barely see the game when fans stood up, but I loved going anyway. They were my hometown team even when they moved to Southern California in the 1980s.

One day in 1993, I received an unexpected call on my cellphone from someone on the Raiders staff. I was surprised that they had my personal cell number, but they said that the team needed transportation in the Bay Area and that my company came highly recommended. Of course I asked what I could do to help—how could I not? A trial ride was set up for one of the upper managers who was flying to the area for a funeral. I arranged for my top chauffeur to handle the trip and made sure everything was textbook. Looking back, I should have done the trip myself, but everything turned out fine. Afterward, I followed up with a phone call to make sure all went well: They told me that everything was perfect and that they would call Park Avenue again when traveling in the Bay Area. I was thrilled! 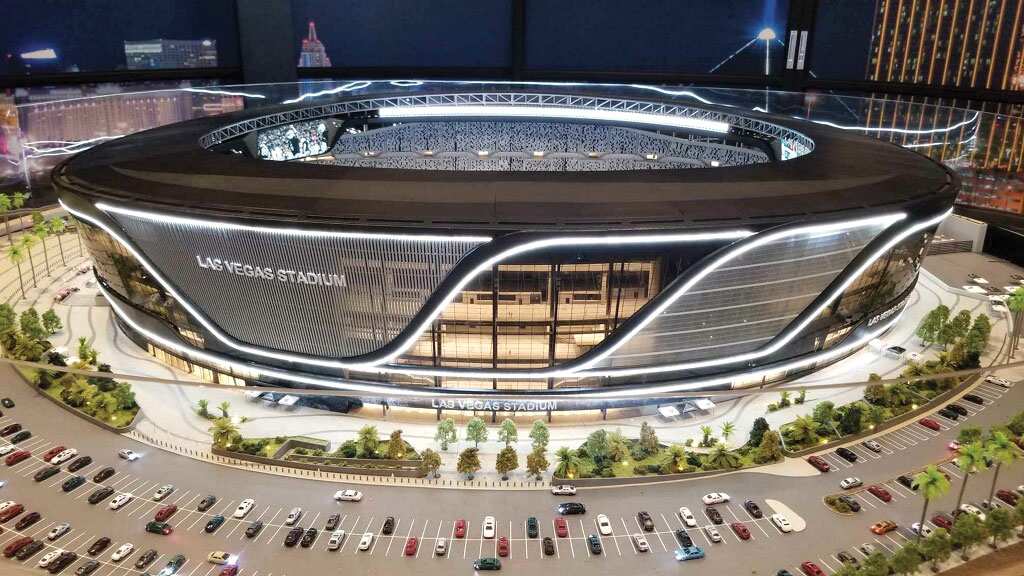 Model of the new Las Vegas Stadium, which will be home to the Raiders starting with the 2020 season A month or two later, it was announced that the Raiders were serious about returning to Oakland. Negotiations take a long time, but the deal was eventually signed: They would come back to Oakland in 1994 to play their first game in the 1995 season. As you can guess, the Raiders became my flagship account and were a priority to everything. Even when I had to downsize the company after the devastation following 9/11, this account was always most valuable to me.

Making no mistakes—and there could be NO mistakes—meant preparation, always having a Plan B, and never letting them know when something went wrong behind the scenes. You see, there are only 32 teams in the National Football League and Carey had the contract with the league for a long time, so this was a massive deal for my small, local company. And it still is today, two-and-a-half decades later.

"In the early ’90s, there was talk of the Raiders who then played in Los Angeles moving back to their original home in Oakland, which was a dream come true for a lifelong Raiders fan like myself."

Football games have become a managed television event, and the logistics of the game are based on time. From when the National Anthem singer begins, to the last play of the game, every second and every minute are critical. This means that the singer absolutely has to be on time for sound check, invited guests need to be in their places as expected, and the list goes on. Of course, the Raiders owners and staff couldn’t be late—ever. Opening day is always the biggest of the season with an incredible amount of moving parts. For you operators who take care of NFL teams, you understand how the day goes and how much time it takes for it to all work. These are major, large-scale events any given Sunday, and I was expected to be there, keeping it moving along like clockwork. 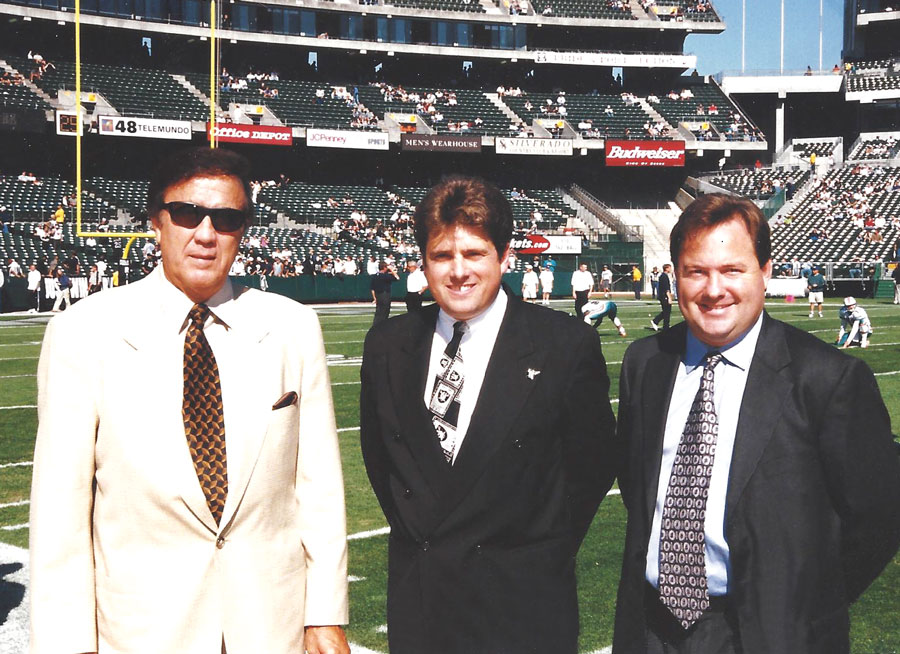 Hartson (center) with former Raiders quarterback, head coach, and announcer Tom Flores (left) and Steve Parsons, Hartson’s chauffeur and childhood friend The rush doesn’t stop during the game. I often have to act as a personal escort for guests who leave the game early or a passenger who arrives late. I can be parking vehicles that need to be moved. I also handle transportation beyond just the game: There are interviews with players, corporate travel, invited guests, and special events for upper management. At times, we would also arrange for players’ transportation to dinner or other functions.

But things can always go wrong, and we’ve had to expect that they do. Flights can be delayed, traffic to the stadium can be difficult, and guests or celebrities can make you wait and cause you to be late. Over the years, the Oakland Police Department got to know me very well, and those officers have become one of my best sources of communication both on and before game day. Constant communication is imperative to making it work.

Back in the day, the biggest thing I had to worry about was chauffeurs talking with one another. They hear a lot, so it’s important to put your trust in someone who is sharp and can keep their mouth shut. Today, it’s become much more complicated to contain delicate information, especially with social media and camera phones in every pocket. To protect the privacy of our VIPs, I’ve had to institute a one-and-done policy if I find anyone taking pictures or sharing information. 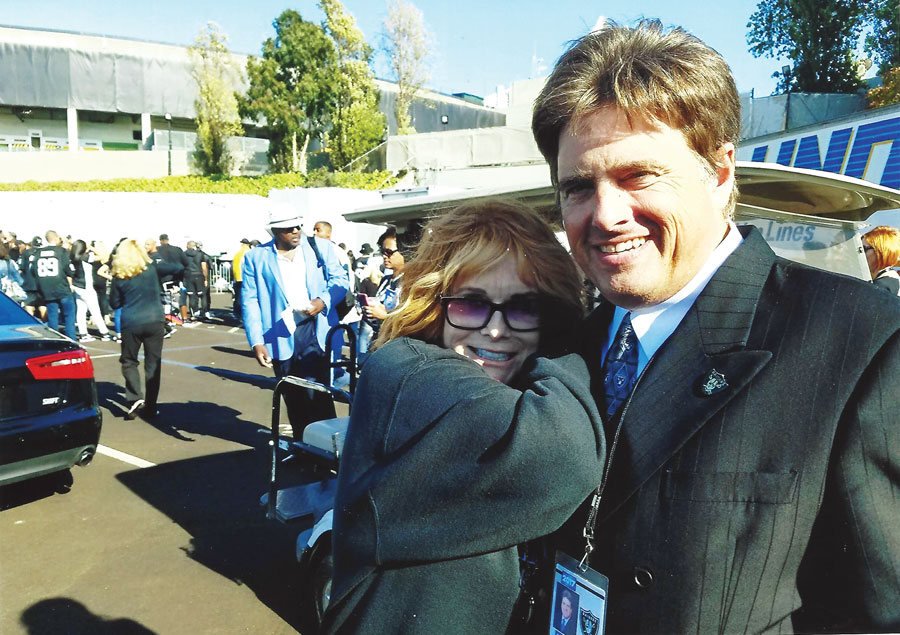 Hartson with actress and Raiders fan Ann-Margret I personally drove and cared for the Raiders principal owner and General Manager Mr. Al Davis starting in 1993, and even after moving to Las Vegas I flew or drove in for game days. He trusted me and I delivered! Mr. Davis also had me manage and care for his guests—many of whom I got to know well—as well as drive for him at five different Super Bowls—including the one in 2002 where the Raiders played.

In 2001, I was considering updating the limousine I drove Mr. Davis in, as it was a 1996 Lincoln Town Car 120". When I asked him about it, he asked what was wrong with the car. I explained that there was nothing mechanically wrong but it was older and maybe ready to be updated. He told me: “No, keep this car. The fans know the car when we arrive to the game, the Oakland Police Department knows the car, and best yet, I know the car.” He wanted me to keep the limousine because he knew where the knob for the AC was in the back. So, I kept the car and he was happy.

"These are major, large-scale events any given Sunday, and I was expected to be there keeping it moving along like clockwork.”

Two years ago, as the Raiders organization was coming to the end of its current lease, it struggled to work with the city principals of Oakland and Alameda County. As part of the negotiations, the Raiders were looking to stay in Oakland but wanted to build a new stadium for the club and their fans. Their current home, the Oakland-Alameda County Coliseum, is 48 years old and is the last stadium in the country used for both baseball and football. 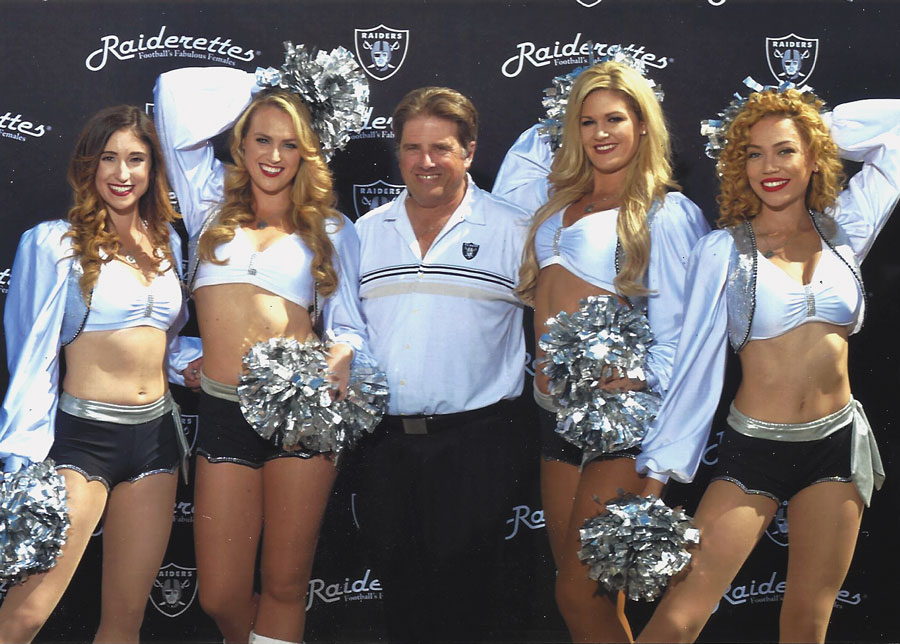 Hartson with some of the Oakland Raiderettes Both the Raiders and the NFL were on board to handle the majority of the cost of a new stadium in Oakland, but the city refused to participate, and the Raiders organization began their journey of a new home for the club. They looked at San Antonio, Los Angeles, and Las Vegas—many factors were considered—but Las Vegas ended up being the right place.

Twenty-five years after that fateful phone call, my hometown team was again moving. The team will continue to play in Oakland through the 2018 season and potentially 2019, but will relocate by the start of the 2020 season once the new Las Vegas Stadium is completed. The brand-new, $2 billion stadium broke ground in September 2017.

So, what does that mean for my future with the Raiders as they will no longer need transportation in Oakland? Stay tuned for my next article to find out.

[CD0818] David Hartson is a longtime industry consultant, partner at procare automotive, and the West Coast editor for ­Chauffeur Driven. He can be reached at david@chauffeurdriven.com.