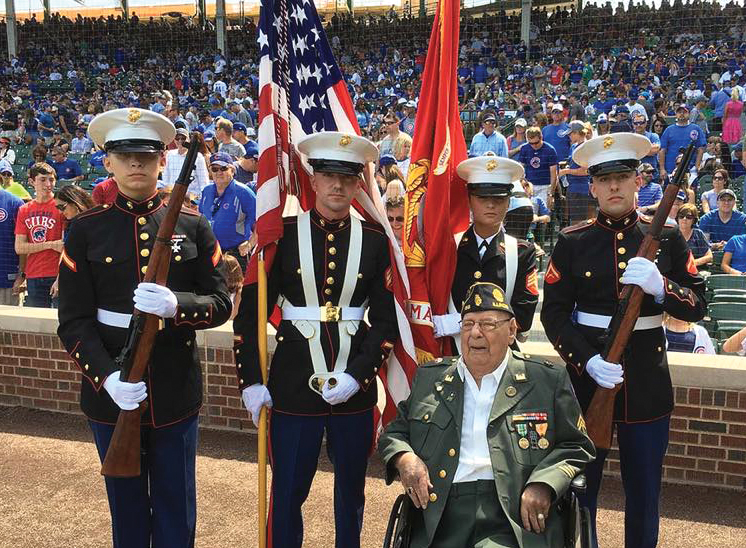 Rento received a hero’s standing ­ovation during the ceremony at Wrigley Field July 31 brought an ominous pall to the Chicago region. An overcast day befitted the sad news it delivered: The founder of Pontarelli Companies and World War II veteran Arthur Rento Sr. passed away at 95, surrounded by his loving family.

Lovingly referred to as “Art,” the Rento patriarch began his Midwestern company—then called Pontarelli Livery Services, bearing the name of his business partner Jerry Pontarelli—in 1977. When Pontarelli exited the company just a few years later, Rento Sr. saw his company become the family-owned outfit it still is today: His son Arthur Rento Jr. and daughter-in-law Debbie, both of whom had been employees of the company, bought out his co-founder’s piece of the pie. Rento Jr. took over the company in 1981, though the elder Rento remained an active, supportive presence in the now-third-generation company he founded. 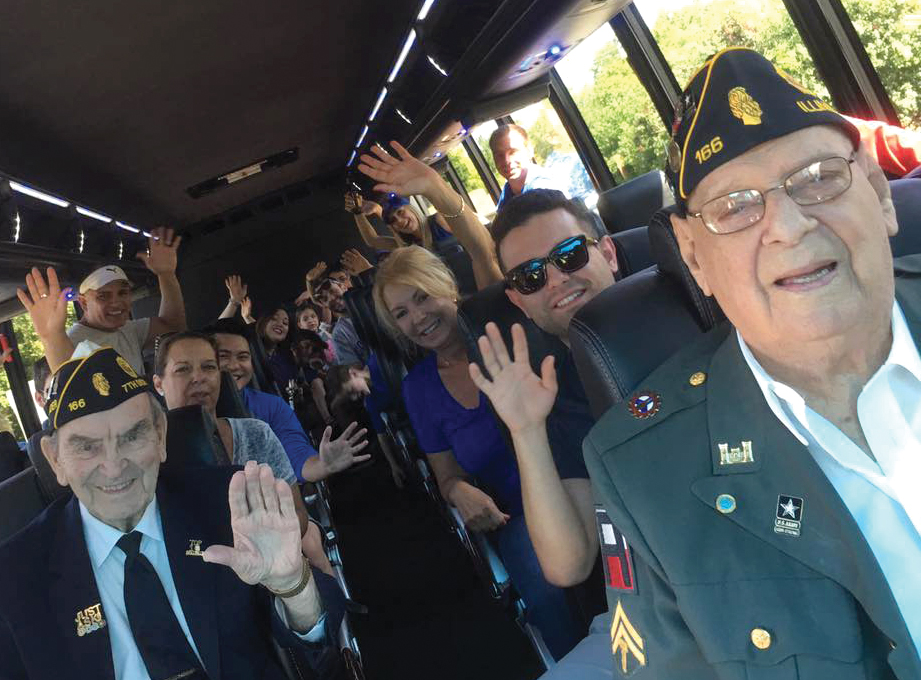 When Wrigley Field had a ceremony for WWII veteran Rento Sr. last summer, he and his family rode in style to the stadium Before establishing one of the biggest names in the Chicago-area transportation game, Rento Sr. operated a cab company for 15 years, and also found work as a City of Chicago Inspector. And before that, the Windy City native was a decorated serviceman who was part of the reconstruction efforts in a post-atomic-bomb Japan, carrying news of the war’s end to the country’s beleaguered civilians who had not yet received it.

Rento Sr. dedicated nearly two and a half years of his life to the U.S. military as a combat engineer during World War II—and he was part of the Normandy Campaign on June 6, 1944. In addition to serving in the Pacific Theater with his fellow men in the 1st Infantry Division during the D-Day landing, he also played a role in the Atlantic Theater during his service.

He was honored almost exactly a year ago for that very same historic event. During 2017’s Labor Day weekend, Wrigley Field hosted a ceremony honoring Rento Sr. to both thank and recognize him for his service. 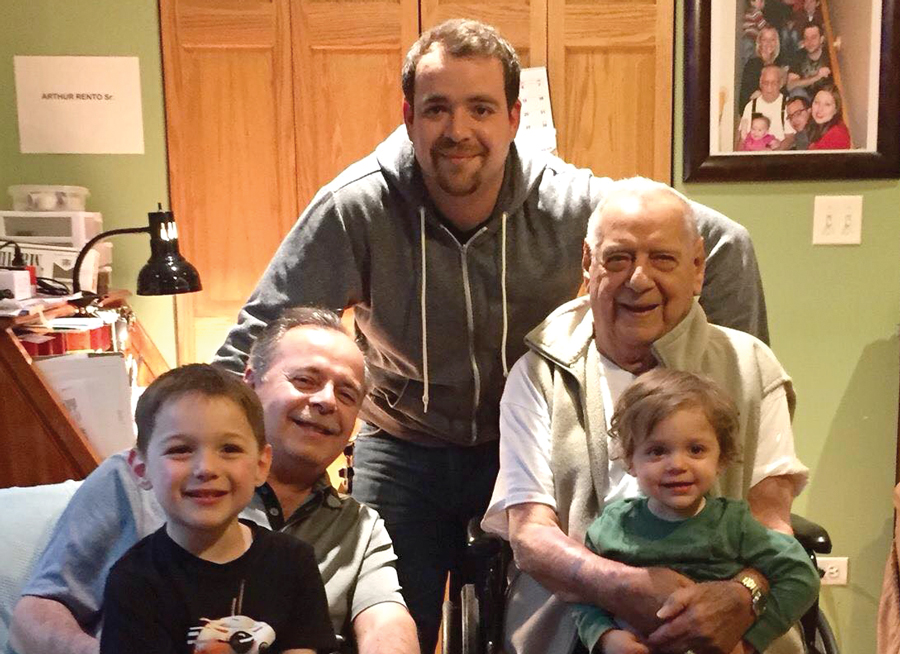 Four generations of Rentos, three of whom have called Pontarelli home As his grandson—the same Art who continues the family-owned Pontarelli tradition for a third generation—wheeled him onto the very field where the Chicago Cubs had less than a year prior broken their so-called curse to clinch the World Series title for the first time since 1908, his image was projected onto the Jumbotron. The crowd erupted into applause and leapt to its feet to give the war veteran a well-deserved, enthusiastic standing ovation. The Rento family was all on hand to watch Rento Sr. receive a team jersey from some of the best seats in the house.

It was not the first time Rento Sr. was publicly honored for his service to his country. Earlier that summer, the Des Plaines Chamber of Commerce welcomed more than 200 guests to honor the World War II veteran during the launch of its Veterans Back to Work Bootcamp, a program that assists 20 servicemen transition into non-military life and civilian careers. Rento Sr. was the honored guest during a day when the chamber announced that more than $75,000 had been raised for the charitable endeavor. 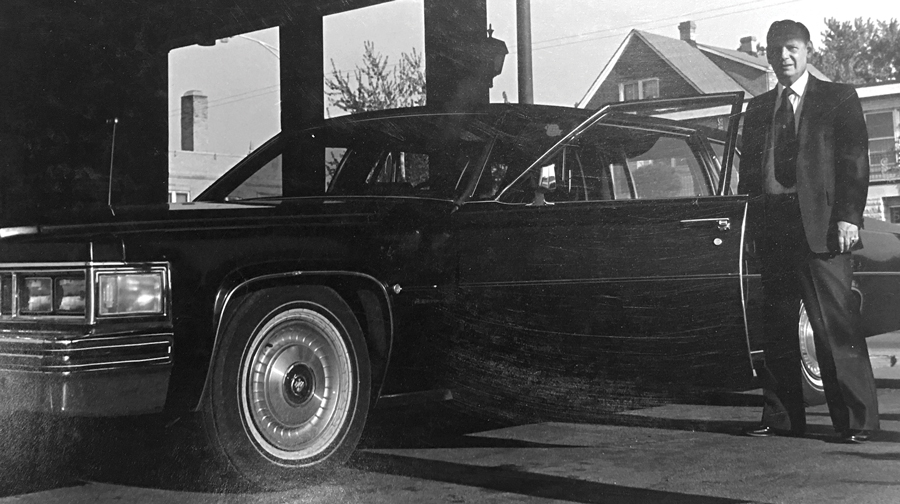 Rento with one of Pontarelli’s limousines of yore In addition to the son and grandson to whom he had entrusted the Pontarelli legacy, Rento Sr. is survived by two daughters, Diane and Cindy; his grandchildren Robert, Jennifer, Elizabeth, Margaret, Michael, Helen, and Philip. He also leaves behind five adored great-grandchildren, his sister Caroline, and many nieces and nephews.

A true family man, it was fitting that Rento Sr. had his family around him when he passed. He will be remembered for his frank honesty, card-playing prowess, jokester nature, and dedication to not only Pontarelli but also his industry—and especially for his devotion to and love for his family, for whom he was a steady patriarch and loving father, grand­father, and great-grandfather.