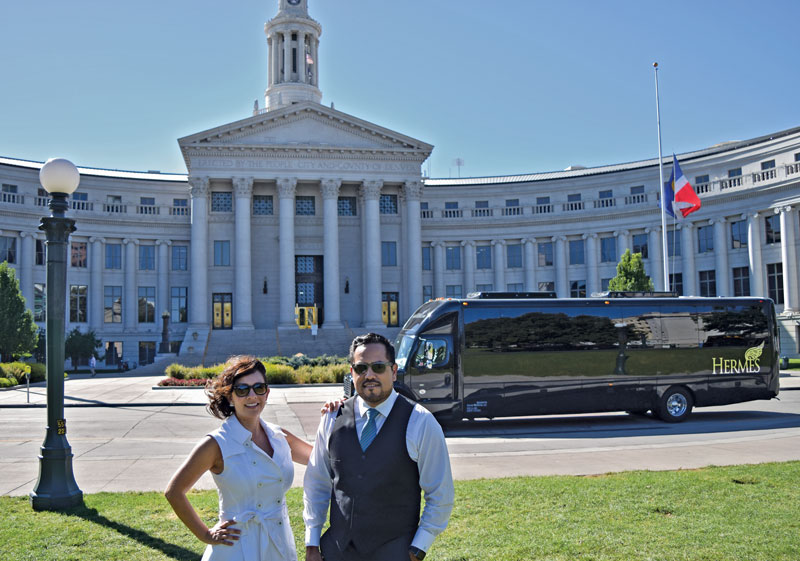 Rocio and Jorge Sanchez, owners of Hermes Worldwide in Denver, with their new Grech Motors EG40 minicoach Denver is a highly competitive market for group travel, so when Hermes Worldwide Transportation CEO Jorge Sanchez was looking for flexibility within his fleet to continue to win that lucrative business in the Mile-High City, he turned to a familiar name: Grech Motors. Aside from their very first minicoach, which was bought from an affiliate in 2013, all of Hermes’ minicoaches have been built by Grech Motors—and Sanchez credits the builder’s innovative features and attractive price point as some of the reasons he chose its newest offering, the EG40.

“When we first started getting into the larger equipment I saw the Grech name everywhere,” Sanchez says. “They always made a big splash at the shows. They are always front and center, and they are a huge supporter of the industry. I was introduced to AJ [Thurber, VP of sales and marketing] and Ed [Grech, founder and CEO], and I heard nothing but good things about them from friends of mine in the industry. I wanted to make a real impact in my market, and Grech Motors was the company I wanted to partner with. I bought my first GM40 with all the bells and whistles, and that’s where my relationship with Grech began.”

In a little more than a decade, Hermes has seen tremendous growth and an evolution of its services. In 2007, Sanchez founded the company with a single sedan; in 2015, the company was named to Inc. Magazine’s prestigious Inc. 5000 list. Sanchez added full-size motorcoaches to his fleet and expanded heavily into the group transportation market in 2017, and the company took delivery of the first two Grech Motors EG40 minicoaches ever built just this year.

According to Sanchez, the EG40, which seats up to 39 passengers, includes a lavatory, and features a full pass-through underbelly luggage area, has been one of his best investments yet—and he’s already ordered a third unit.

“The EG40 has been a home run for us,” Sanchez says. “The returns on it are great. We’ve received nothing but positive feedback on it, not only from passengers who love the design and ride, but also from chauffeurs who love how it handles. It has definitely helped us win new business, and in some cases, it’s helped us win back customers we may have lost due to their budgets, where they need more luggage space than our GM40 [minicoach] offers. The EG40 interior is every bit as nice as those of our motorcoaches.”

Hermes’ first two EG40s were ordered back when the vehicle was still just a concept. While investing in a concept vehicle may seem like a gamble to most, it was a logical and sensible decision for Sanchez. Ed Grech showed Sanchez the conceptual design during a tour of the Grech Motors production plant, and Sanchez told him he would take two.

“Ed kind of laughed and brushed me off because it was still just a concept, months before it would ever get into production,” Sanchez says. “But I told him, ‘Ed, I’m serious, I want two of them. When can I get them?’”

Sanchez admits that he had some reservations about getting into larger equipment at first because he was initially concerned about overhead costs or downtime. However, because of the consistently positive experiences he had—and continues to have—with the Grech team, Sanchez says it confirmed that he picked the right coachbuilder to partner with, making it easy to purchase the EG40 based solely on seeing its concept.

"Every interaction I’ve had with Grech Motors continues to solidify my trust in them. – Jorge Sanchez, CEO of Hermes Worldwide Transportation 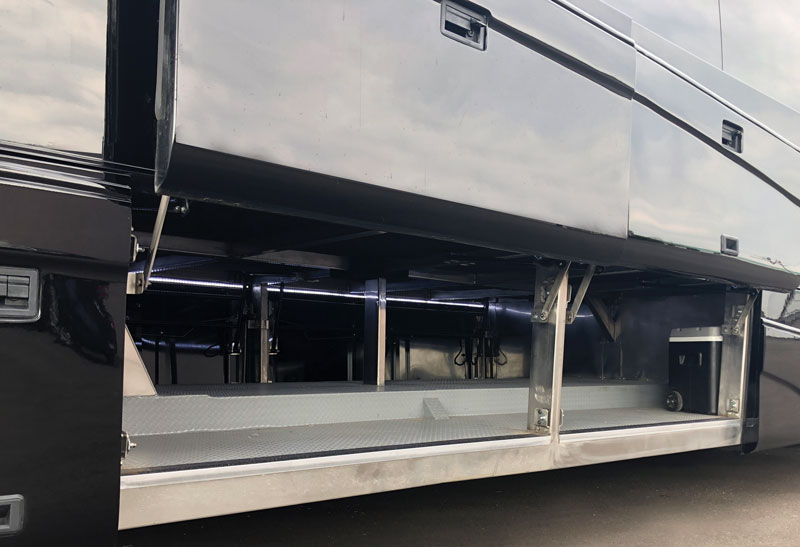 The EG40 minicoach features underbelly storage like a full-size coach “I trusted the Grech team to stand behind their product,” he says. “And they have definitely lived up to my expectations. Exceeded them, in fact, in terms of after-sales support. Every interaction I’ve had with Grech Motors continues to solidify my trust in them. The transaction process is always easy, delivery is always on time, and if anything goes wrong with my equipment, the team is on it right away to make sure it gets resolved so I can continue serving my clients.”

Sanchez credits the EG40’s innovative design features—most notably the aforementioned full pass-through underbelly luggage area—and high-quality build with making it one of Hermes’ most popular vehicles. Just three months after he took delivery of his EG40s, he had already put about 15,000 miles on both.

“I’ve sent them out for all kinds of group work: from conventions that needed shuttles and corporate groups that needed airport transfers to sports teams and youth groups going on the road,” Sanchez says. “They’ve gone as far as Minnesota and back, and the vehicles have performed amazingly. What’s really impressed me the most about the EG40 is that for a first model year vehicle, the quality has not suffered in any way, shape, or form from what my prior experience has been with Grech coaches. That shows me there was a lot of planning put into place for this design, and everything Ed and his team have learned building coaches in the long time they’ve been around is demonstrated in this vehicle.”

Sanchez says the EG40’s design, price point, and operating costs have helped him expand his business by allowing him to compete against lower-priced operators that he might normally have lost business to.

One such story Sanchez shared was a client who had booked two Hermes motorcoaches but suffered from budget cuts. After a discussion, he presented his EG40s as an alternative because they not only fit the client’s budget but also easily accommodated their capacity needs. The clients loved the idea and were ecstatic, and Sanchez kept a booking he may have lost.

“When customers see our name and brand and know our service standards, and then I’m able to present them with a luxurious vehicle at a price point that matches or is better than what the other bus companies have, they go with us immediately,” Sanchez says.

Although Sanchez’s EG40 fits 39 passengers (with lavatory) compared to the 56 passengers that a typical full-size coach can accommodate, he says it’s a sweet spot for most group work. The new vehicle actually enhances the company’s offerings while not taking business away from its GM40 or full-size coaches. 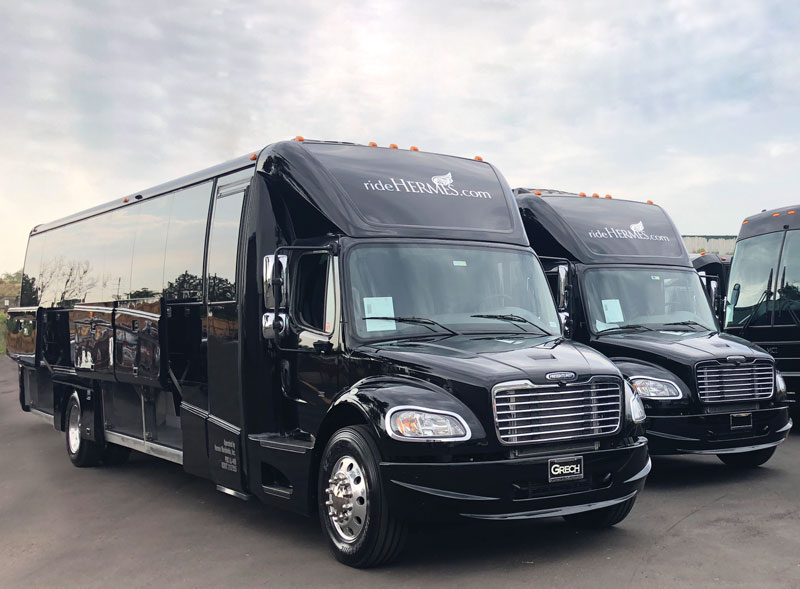 Hermes was first to take delivery of the new EG40 minicoaches “These groups are usually fewer than 40 passengers, and the EG40 has allowed me to come in and provide clients with a much higher-end vehicle, in terms of the amenities, than my competitors,” he says. “There are still groups that only need a smaller minicoach like our GM33 or GM40, and some groups that definitely need our full-size coach. But there is a lot of business in the gap between those, and that’s where our EG40 really shines.”

In addition to its ideal capacity, the EG40 offers the same cubic feet of luggage space on a per-passenger basis as that of a full-size coach, so it’s the best of both worlds.

The ground transportation industry is growing ever more dynamic, as last-minute requests and changes increase, thanks in large part to the rise of TNCs and their on-demand services. In order for operators to succeed, they must be fluid to adapt to constant changes in traveler behavior, especially in the highly lucrative—and competitive—group travel market.

For operators who are new to larger equipment, Sanchez suggests the EG40 as a great way to get a foot in the door, saying that it’s the perfect vehicle to handle most groups.

“The EG40 will allow you to keep that business in-house instead of farming it out, and yet it’s still small enough that you can also put a group of 20 in it,” Sanchez says. “It can be used for airport transfers, shuttle work, and even long over-the-road trips.”

Sanchez also recommends the EG40 to operators who already have minicoaches and motorcoaches.

“This vehicle creates so much flexibility for you and bridges that gap between your minis and full-size coaches,” he says. “It’s a high-end luxury vehicle that you can offer at competitive prices, so you please everyone from the most discerning passengers to the budget-conscious travelers.”