Regulatory Reform Discussions in the Wake of the N.Y. Limousine Crash

Editor’s Note: As this article discusses a fluid and ongoing investigation, details may have changed since the publication of this issue but were as accurate and verified as available at press time.

The recent tragic limousine crash that claimed the lives of 20 people in Schoharie, N.Y., is heartbreaking. While a small town is mourning from the deadliest transportation disaster in almost a decade, policymakers across the U.S. may be re-examining the regulations surrounding stretch limousines to ensure that more uniform and increased safety laws and protocols are in place.

What We Know Now
As of press time, we do not yet know what caused or contributed to the crash, though the circumstances surrounding the incident are highly unusual.
• The vehicle was a stretched 2001 Ford Excursion, which had failed state inspection and had been declared “unserviceable” the month prior for several violations, including out-of-service brakes
• The 17 passengers—including four sisters, two brothers, and their friends—were on a mid-day trip for wine and beer tasting, and the limousine was their second choice since the bus they intended to book broke down
• The owner had listed the limousine for sale on Craigslist two days before the crash, noting that it was “DOT ready” and fully serviced, contradicting the inspection report
• Nauman Hussain, the operator of the company that owns the vehicle, was charged with criminally negligent homicide
• Autopsy results confirmed all 20 victims died from “multiple severe traumatic blunt force injuries”
• The chauffeur did not hold the required commercial driver’s license to operate the vehicle, and state police were still awaiting the results of toxicology tests as of press time

The Evolution of the Regulatory Landscape
Those operators who were around in the ’80s and ’90s remember when unregulated coachbuilders were modifying vehicles after-market to create stretches and super-stretches that included hot tubs, beds, VIP lounges, and other modifications that pushed the limits. Bigger was often better, and structural integrity was not always the primary concern. Several fatal accidents caused NHTSA to push back on Ford, General Motors, and the limousine industry to develop testing to ensure limousines complied with federal safety standards; the results were two programs: Ford’s Qualified Vehicle Modifier (QVM) and GM’s Cadillac Master Coachbuilder (CMC). Through these programs that debuted in the ’90s, Ford and GM certify coachbuilders to perform after-market modifications on specific vehicles in accordance with automotive engineering standards and quality control guidelines. Currently, Lincoln MKT Town Cars are approved for conversion into a stretch limousine up to 120 inches through QVM, while CMC allows modifications of the XTS Professional Vehicle Chassis. These programs provide manufacturer approval, oversight, an extended limited warranty on major components, and—most importantly—safety. 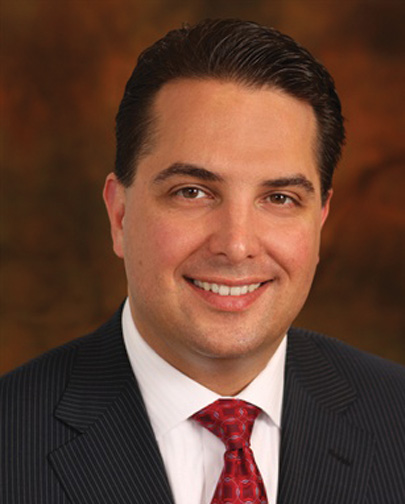 “One of my first official acts as Chair of the New York City TLC was to rein in the stretch limousine business. Working with the New York City Council, we were able to close loopholes that led to heightened inspections and scrutiny ...”

While the heyday of creating over-the-top super-stretches has diminished significantly, many older vehicles remain on the road. Also, a new trend of excess has emerged with after-market modifications to party buses—with the addition of dance floors and poles, stairs to access the roof, and other modifications that may not impact structural integrity but can raise safety concerns.

One of my first official acts as Chair of the New York City Taxi & Limousine Commission (TLC) was to rein in the stretch limousine business. Working with the New York City Council, we were able to close loopholes that led to heightened vehicle inspections and scrutiny in an industry that was, at the time, growing increasingly unsafe. The result is one of the most effective safety regulations in the United States and beyond.

In NYC, all TLC-licensed vehicles except for taxicabs must undergo a safety and emissions inspection at the TLC’s Safety and Emissions Division facility when the vehicle owner applies for a new or renewal for-hire vehicle license. Beyond these TLC inspections, the vehicles must be inspected twice more in the first year (a total of three times annually) by the state's Department of Transportation (NYSDOT), and meet inspection standards set by the state DMV, except for stretched vehicles, which only require two inspections a year. TLC procedures—unlike most areas of the country—require stretch limousine owners to provide a letter proving that the vehicle was modified by a manufacturer-certified coachbuilder.

New York State law, however, does not define “stretch limousines.” Vehicles that are designed to carry more than 10 people, including the driver, are classified as buses and must obtain operating authority from NYSDOT. Recently, the DMV changed its vehicle safety inspection regulations for stretched or modified vehicles: It will only inspect such vehicles if NYSDOT has determined the vehicle is not a “bus” subject to NYSDOT’s jurisdiction. Vehicles that require operating authority will undergo a NYSDOT safety inspection as part of the application process.

Commercial vehicles that are used to transport passengers could come within the jurisdiction of federal, state, and/or local regulators depending on the vehicle size, seating capacity, and whether the limousine transports passengers across state lines.

There is disjointed governance and inconsistent regulation among the states and localities, especially with regard to stretched vehicles, with differing standards. Since the plethora of government agencies base their differing definitions and jurisdiction on seating capacity, one of the threshold questions is whether a stretch limousine is to be treated as a bus or a for-hire vehicle. The gray areas and loopholes in state law make it possible to evade New York City’s jurisdiction by designing the vehicles to carry 10 or more people, including the driver, and registering as buses with the NYSDOT, which inspects these vehicles.

What Happens Next: Regulatory Reform?
The National Transportation Safety Board (NTSB) is currently investigating the crash, while federal and state legislators and government transportation officials have already proposed legislation and called for investigations and regulatory changes. As we learn more, government officials may look closer at their laws and transportation policies regarding the stretch limousine and party bus industries.

There are many directions new regulations could take. For instance, it is possible legislators could pass a mandatory vehicle retirement age for stretches that are not part of a manufacturer’s program. NYC’s TLC is the only agency in the U.S. that has implemented regulations for taxicabs to be retired and replaced by new vehicles seven years after they have been placed into service.

Regulators may decide that older stretch limousines and vehicles with higher mileage are subject to more frequent and rigorous safety inspections. Any stretch that was not modified by a manufacturer-certified coachbuilder could be subjected to additional inspections and equipped with crash-avoidance technology and telematics devices that record driver behavior and vehicle diagnostics.

These technologies have already been put to the test in NYC. TLC began the Vehicle Safety Technology (VST) pilot program to study the use of innovative built-in and after-market technologies, such as electronic data recorders, cameras with event-based recording and live video feeds, driver alerting/collision avoidance systems, and analytics platforms in 2015. More than 2,000 vehicles were officially involved over the course of the three-year program. Although TLC concluded that it would not mandate use of VST systems in TLC-regulated vehicles at that time, it did note that it found it promising. Also, NYC implemented reforms in 1998 for all TLC-licensed drivers, requiring mandatory drug testing, probationary licensing, mandatory defensive driving courses, and the lowest point thresholds for removing drivers from the road for traffic convictions. Regulators may explore adoption of similar standards for drivers in their jurisdictions.

New York State Senate introduced legislation (S-9177) that would require stretch limousines to be taken off the road after 10 years, impose a minimum liability insurance coverage of $2 million, create new procedures if a vehicle fails a safety inspection, and require inspection results to be displayed on the NYSDOT website as well as on a “license plate” sized sticker on the vehicle’s exterior. The law would apply to limousines that have been stretched to seat 10 or more people, including the driver. Under the bill, the state could impound a vehicle that fails inspection if the owner does not correct the violation within 10 days, and it would be a class E felony to drive a vehicle that failed inspection. In addition, stretch limousine drivers would be required to complete a safety training course and pass the course exam. 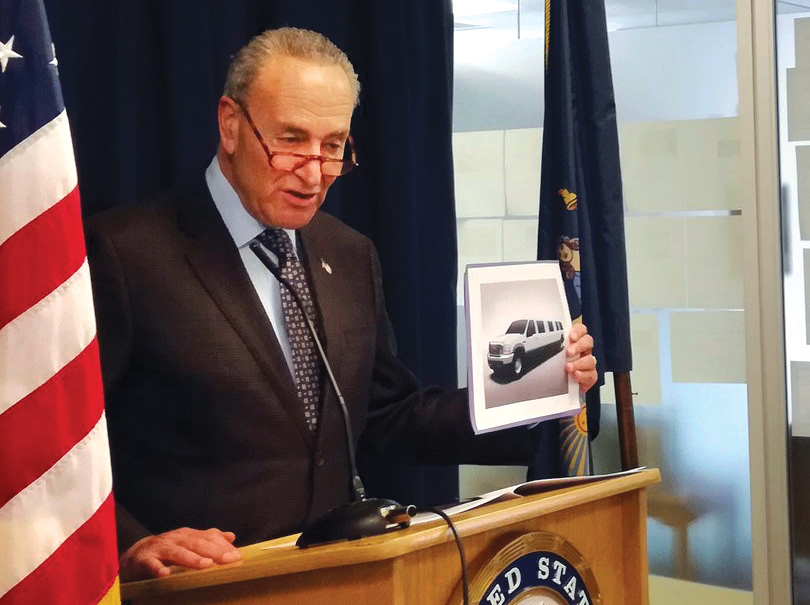 U.S. Senate Minority Leader Charles Schumer (D-N.Y.) (above) and U.S. Senators Kirsten Gillibrand (D-N.Y.) and Richard Blumenthal (D-Conn.) called on NHTSA to revisit federal safety standards for stretch limousines after the accident Several U.S. senators have called on NHTSA to devise new federal safety standards for stretch limousines. Specifically, the senators asked NHTSA to evaluate the construction, address any safety gaps, identify regulatory changes to improve safety, and develop specific requirements to inspect stretched vehicles to ensure that only structurally sound vehicles are allowed on the road. Additionally, they asked the agency to review whether limos should be classified as commercial vehicles, subject to requirements under the Federal Motor Carrier Safety Act (FMCSA), which would then require limo drivers to carry a CDL and undergo more extensive training. The vehicles themselves would also be subject to more rigorous inspection, repair, and maintenance.

In terms of driver vetting on the federal level, FMCSA—which regulates interstate buses and trucks and is a subdivision of the U.S. Department of Transportation (USDOT)—also regulates limousines with a seating capacity of more than 11 passengers. FMCSA has rigorous rules to ensure that drivers receive medical certifications, and now uses technology to ensure that drivers cannot work longer than a certain number of hours consecutively (which is recorded through a required Electronic Logging Device, or ELD, as of December 2017). Further, the agency regularly tracks and audits operators with these vehicles. The Federal Motor Carrier Safety Regulations (FMCSRs) require companies that operate vehicles for-hire with a designed seating capacity of more than eight (including the driver), among other commercial motor vehicles (CMVs), to register with the FMCSA and undergo a safety inspection if they operate interstate. Many states, including New York, New Jersey, and Connecticut, require all CMV carriers to register with FMCSA and obtain a USDOT number, even if they do not cross state lines.

As the investigation continues, regulatory reform could be a call to action for legislators, transportation officials, and vehicle manufacturers everywhere to immediately identify and implement uniform and best safety practices for vehicles and chauffeurs. However, any such regulation should be reasonable and effective, leveraging technology and providing for safety and accountability at every level. While the cause of the crash may not lead to any faults or shortcoming in government regulation, government typically reacts when there are high-profile crashes and takes a fresh look at issues and laws. In memory of the victims of this horrible crash, the families should receive some measure of comfort that the manufacturers and regulators will do everything they can to prevent future tragedies as shortcomings or gaps are identified as a result of the attention this crash has received. Let’s hope and pray that another stretch limousine crash of this magnitude never happens again.

[CD1118] Matt Daus is a partner with the law firm Windels Marx, president of IATR, and a leading authority on ridesharing apps. He can be reached at mdaus@windelsmarx.com.