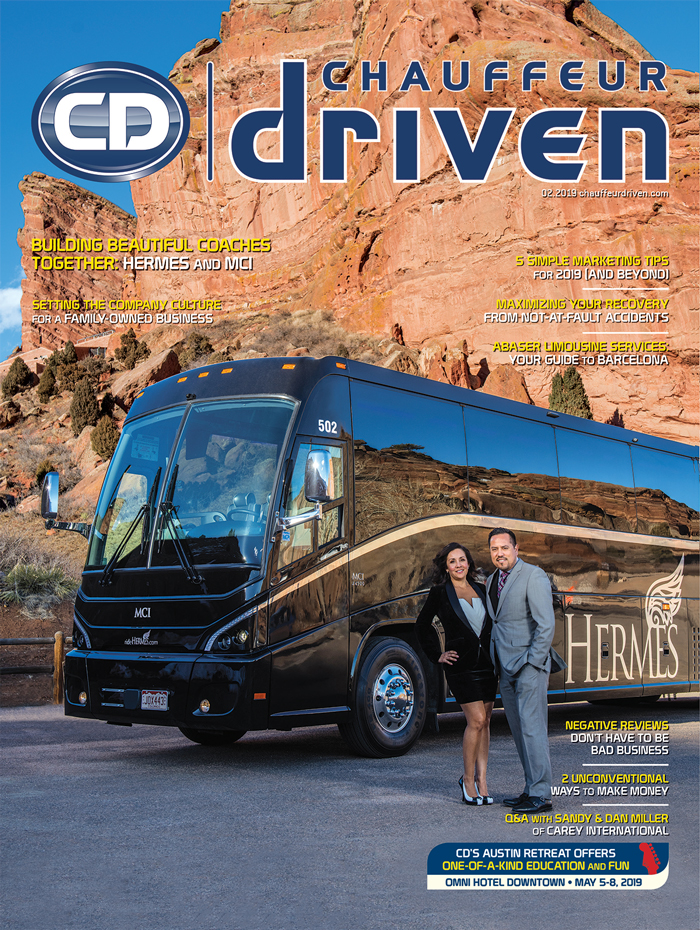 Cover Art: Hermes Worldwide Vice President Rocio Sanchez and CEO/President Jorge Sanchez show off their MCI J4500 coach at the famous Red Rocks Amphitheatre. Photography by Daniel Brenner Photography. With more than 300 days of sunshine annually and picturesque natural beauty of the Rockies framing the city—a gateway to many of the best ski resorts in the country—it’s no wonder that Denver is such a popular destination for groups and events. It’s this group work that has become Hermes Worldwide Transportation’s largest and steadiest growing sector recently, and one of the key reasons for expanding the company’s fleet to include its largest vehicles yet.

For Hermes President/CEO Jorge Sanchez, jumping into motorcoaches was a logical decision in the evolution of his 11-year-old company, but one that was three years in the making. From a one-sedan company to a fleet of 35 (and counting) today, Hermes certainly didn’t lack for group work or diversity of clients. Trusted motorcoach partners handled those runs. What they didn’t have, however, was the parking space to accommodate the coaches he wanted to purchase. Once they moved into a new facility in 2016, all of the obstacles were lifted.

“We have always been in the group events business both locally and globally. Our clients liked all the other vehicles that we provided them, so they asked if we would consider purchasing our own coaches. We acquired our first two in July 2017—it was all client driven. I wish I had done it two years earlier,” Sanchez says.

He was able to take the time to research other manufacturers and find the best coaches that would not only work for his fleet, but also offered the amenities that a luxury transportation service needed. Trusted industry referrals led him to MCI’s Vice President of Sales Southwest Dave Dorr. 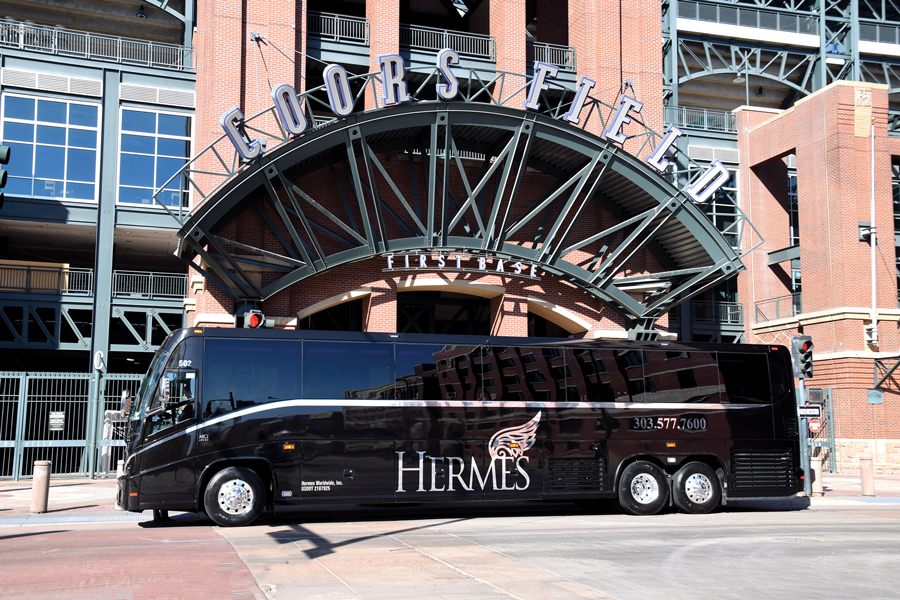 An MCI J4500 coach, owned by Hermes Worldwide of Denver, Colo., at Coors Fieldes “I met Dave Dorr at my first UMA show and eventually met Dave Johnson in finance and they were both just very easy to work with,” says Sanchez. “They were very accommodating, explained each step of the process to me, went over all the features and options—they didn’t steer me wrong. They showed me some additional features I might benefit from. It was a very smooth sales process—I never felt pressured. It’s one of the easier transactions I’ve had to do.”

Dorr says that after getting to know Sanchez and what Hermes’ clients wanted, he recommended the J4500 bus, one of the builder’s best-selling coaches for the luxury transportation market, thanks to numerous features and upgrades that are tailored for high-end customers.

“This is a growing sector for MCI, and the J coach offers more customization that our luxury transportation customers are looking for,” says Dorr. “Jorge runs a high-end corporate service, and he seemed to be focused on offering a particular type of experience for his customers, so this coach allowed him to do that.”

“When I saw the mock up with my logo on the bus, it was just an attractive vehicle. But when I actually saw the finished coach in person, their design with our logo just meshed really well,” says Sanchez. “Our brand is very important to us, so we invest a lot of financial resources to keep the vehicle running mechanically sound, but want it to be aesthetically appealing as well.”

The J4500 is a coach that is aimed at the luxury market with accents like a streamlined and frameless window exterior, modern LED lighting, and an exclusive curved staircase into the bus. The first two coaches that Sanchez purchased in 2017 were black on black with seating for up to 56, plenty of luggage space, and a restroom for the long-haul trips that the coaches are regularly used for. 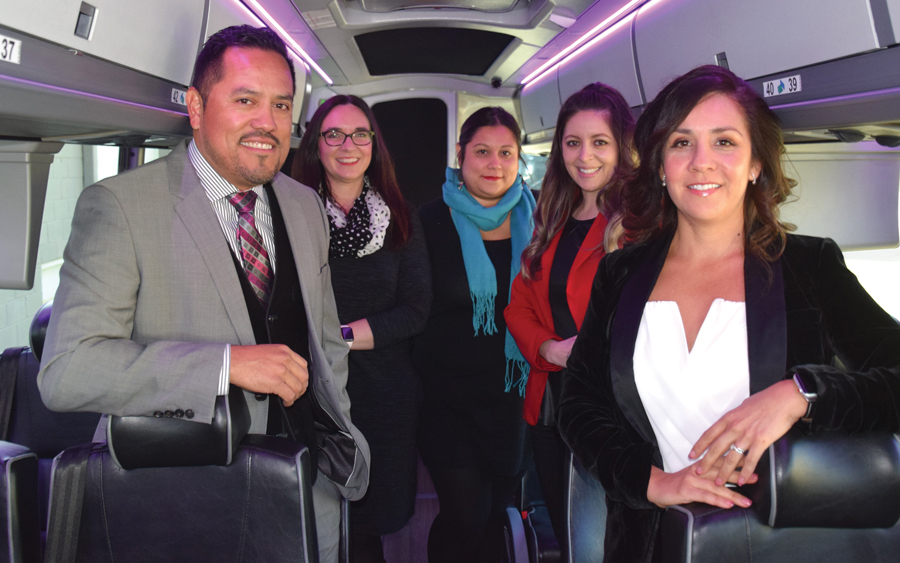 L to R: Jorge Sanchez, Group Coordinator Adrienne Brown, Reservations Manager Lucinda Sanchez, Client Relations Manager Alysha Moore, and Rocio Sanchez inside their MCI J4500 coach Beyond parking, adding coaches to the fleet impacted the Hermes team in another way: training. Hermes already owned and operated minicoaches and had a handle on the stringent requirements of DOT compliance, but the team had to learn how to properly book and sell motorcoach transportation.

“We spend more time training staff. Our coaches are booked for multiple days and we have to allow for that deadhead time back, as well as time to clean and service the buses, so it’s a different way of thinking,” he says.

He says that the coach market grew to 27 percent of his business in 2018, and is continuing to grow. When Amazon was scouting its additional headquarters location in the Denver area, the world’s largest retailer used Hermes buses. Hermes also recently handled a 1,500-person group move through an event at Gaylord Rockies, a local resort. Denver-based work, however, is just half of Hermes’ group work: Sanchez says that multi-day trips for camps, youth groups, collegiate events, and other tours outside of Colorado are consistently part of his reservations.

“With our proximity to the Rocky Mountains and states like Arizona, Utah, Kansas, and Oklahoma, we’re in a nice central location that allows us to go to these places. Owning these buses has really opened up the doors to diversify our client base even further,” he says. “We’re quickly trying to capitalize on the new verticals that have been presented to us. We recently completed three very distinguished and high-level contracts and we’re finalizing a deal with our first professional sports team. We also didn’t realize that there would be such a strong market for wedding work with the coaches.” 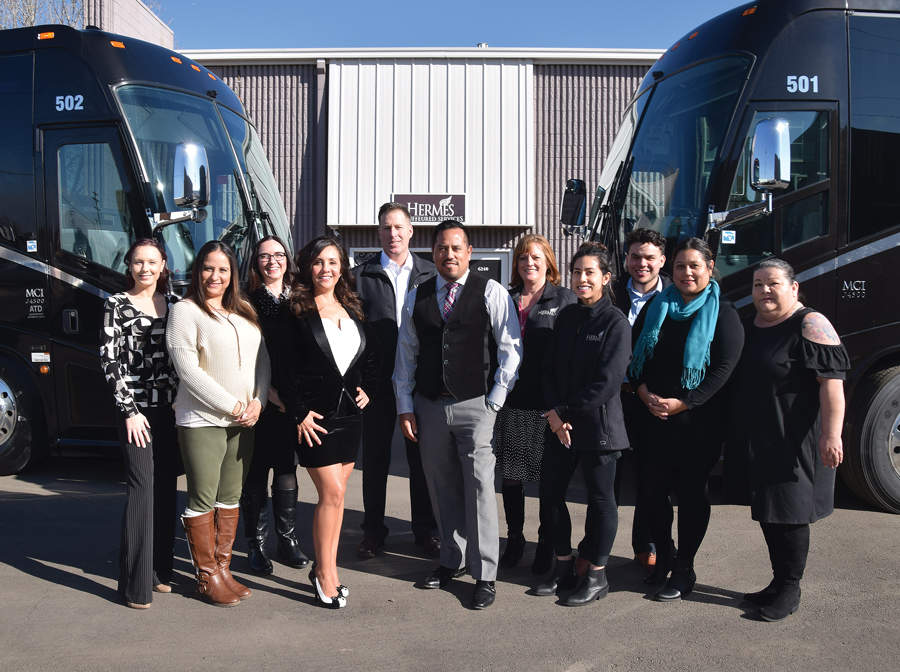 “When we were going to purchase coach number three, MCI came to us with a lot of nice enhancements that conveyed that luxury feel rather than just a big box,” says Sanchez, who also opted for the available programmable puddle lights that can display the customer’s logo as they enter the bus and 110V/USB ports at every seat.

Because any vehicle downtime is lost revenue, and the nearest MCI authorized service center is based in Los Angeles, Sanchez keeps a full-time mechanic and maintenance team on hand to keep his coaches in top shape. Coaches obviously require more detailing time than sedans and SUVs, but Sanchez says that they have it down to a science. When their coaches require an expert, he says that MCI is always available.

“After-sales support is very good,” says Sanchez. “They regularly check in and help on site. When we have a problem, they make the commitment to ensure it’s addressed. My mechanics have told me that the MCI team has been very supportive when we’ve had an issue, no matter how small, and they’ve patiently walked us through it. They are also very good about getting us parts quickly.” 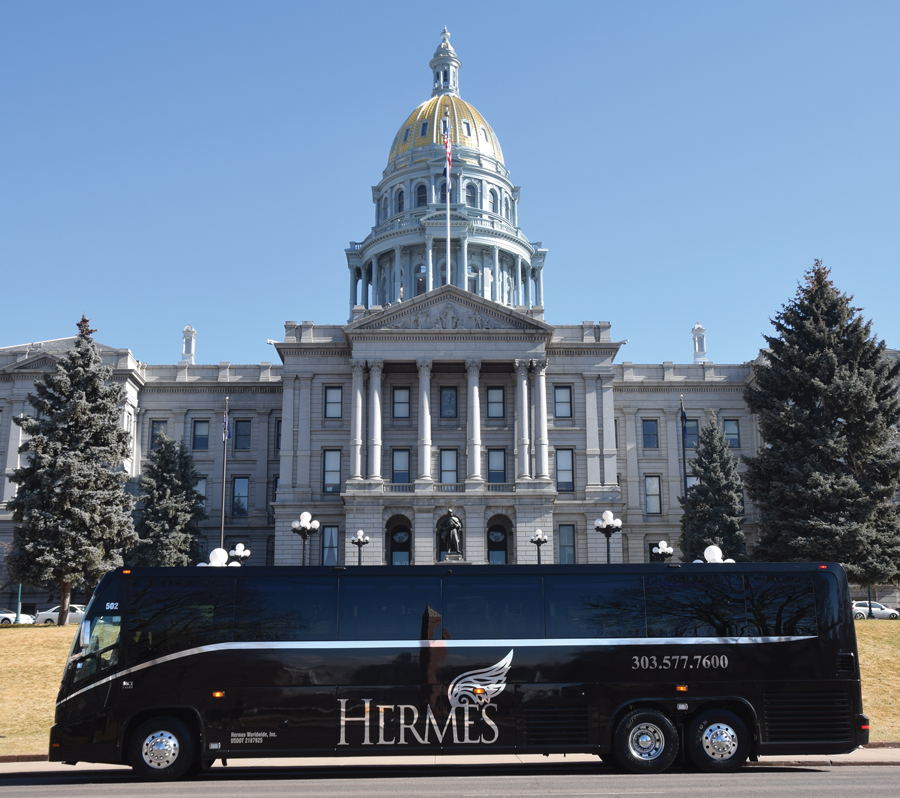 Hermes’ J4500 MCI coach at the Denver State Capitol Dorr says that MCI takes after-sales support seriously and offers more than 450 online classes (also via the MCI app) to its customers’ service team free of charge through its MCI Academy. Mechanics can earn certifications as they complete courses. Periodic webinars will cover special topics or provide in-depth training on a specific issue. Additional in-person courses at various levels of competency are held regularly at MCI’s training facility in Louisville, Ky.

“MCI also just launched our Motorcoach Technician Apprenticeship Program in January 2019, which is certified through the Department of Labor (USDOL),” says Dorr. “I believe it’s the first of its kind to be offered by any coach manufacturer and is comparable to ASE certification for mechanics. It’s our way of helping to educate our customers.”

Sanchez says that he’s already ordered his fifth and sixth MCI coach, which will be delivered in late spring and just in time for the busy summer months.

“MCI is really paying attention and listening to what our market is looking for and what we think is important. They realize it’s not just a vehicle, but one that can be functional, pretty, and provide all the amenities you want. The amenities and safety features were reassuring because it’s a big investment—I want to do all I can to ensure that my team and passengers are comfortable and safe.”