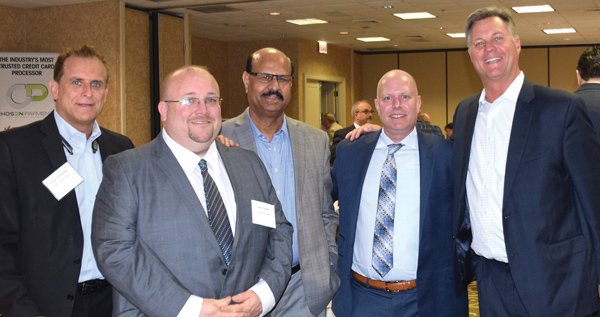 L to R: Vince Schneider of JED Transportation, Ken Carter of Aadvanced Limousines, Muhammad Bhatti of Limo Corp of Chicago, CD Publisher Chris Weiss, and Rick Hutson of JED Transportation The Illinois Limousine & Bus Association’s (ILLBA’s) annual meeting once again brought in attendees and speakers from across the country, who all flocked to the Edward Hotel in Rosemont for a day of education, networking, and vendor exhibits on May 15.

The event kicked off with a Pre-Meeting Networking Cocktail Reception the evening of May 14. Attendees had an opportunity to catch up with old friends and make new ones while gearing up for the next day’s big event.

On the meeting day, vendors were already open and ready to show off their vehicles, services, and products an hour before ILLBA President Tracy Raimer of Windy City Limousine & Bus welcomed her statewide, regional, and national industry peers to the first ILLBA annual meeting under its new association name. 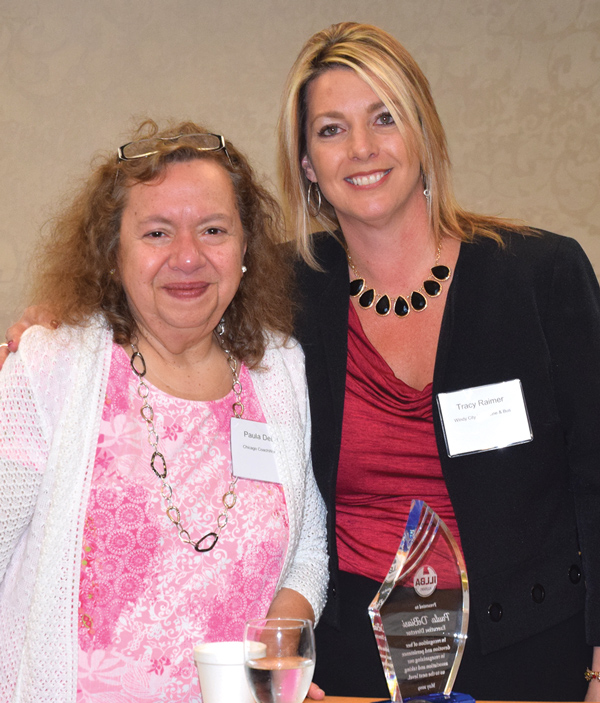 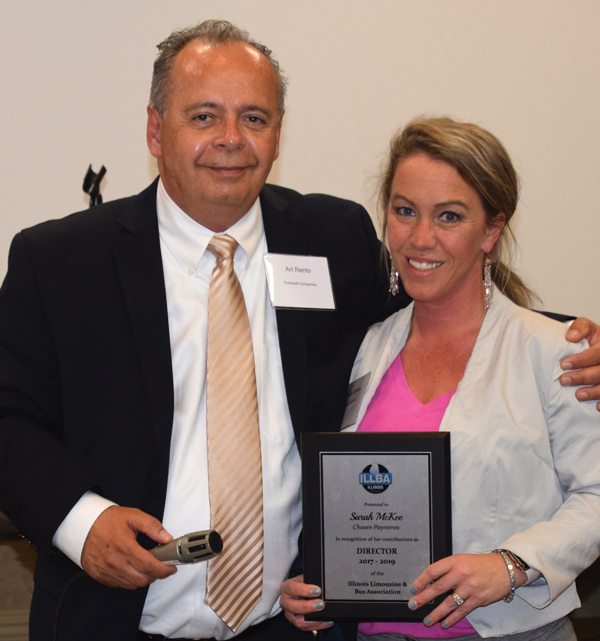 Art Rento of Pontarelli Companies and outgoing ILLBA Director Sarah McKee, who was recognized for her dedication to the association

And the day’s agenda included education and updates covering everything from a look at the industry itself, regional compliance, and marketing advice.

“These sessions were a reflection of what our industry is going through right now,” said Raimer. “We’re definitely evolving, and I think we’re over that peak where now we understand what we need to adapt to. We had the DOT speak to our members about the increased responsibilities that come with buses. Deputy Commission Rupal Bapat spoke on behalf of Chicago about all of the different meetings we’ve had for the past five or six years and all the ordinances we’ve been dealing with—having her there speaks volumes about that relationship because she wants us to know what to expect. Digital marketing is big with operators, so learning how to market digitally from one of our sponsors was important. And we thought we needed to have someone from the NLA board talk about the new partnership between them and Chauffeur Driven, and how that will affect the industry.” 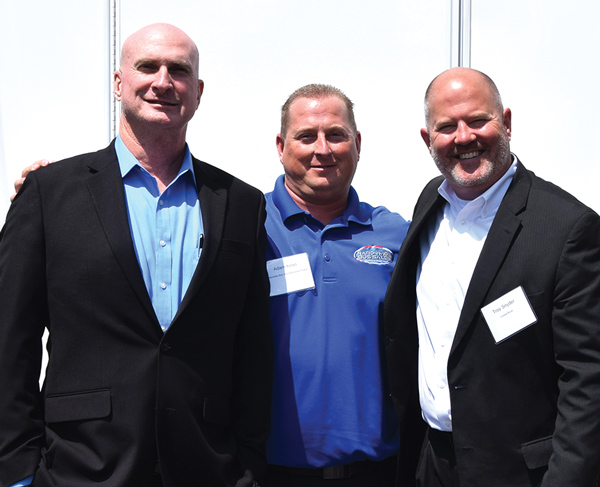 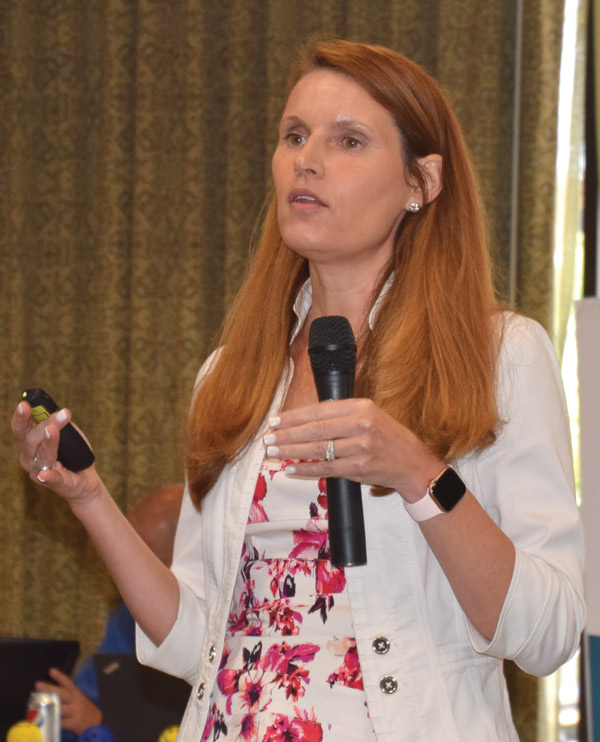 Maren Graham of The Hudson Group She then spoke about the association’s past year and immediate future, the next hour was dedicated to DOT and compliance. John Murphy—a Motor Carrier Safety Assistance Program (MCSAP) Compliance Officer with the Illinois Department of Transportation—was joined by Illinois State Police troopers Mark Pietrzyk and Brian Szfranski of Commercial Vehicle Enforcement and the Trooper Passenger Carrier Inspection Team, respectively. 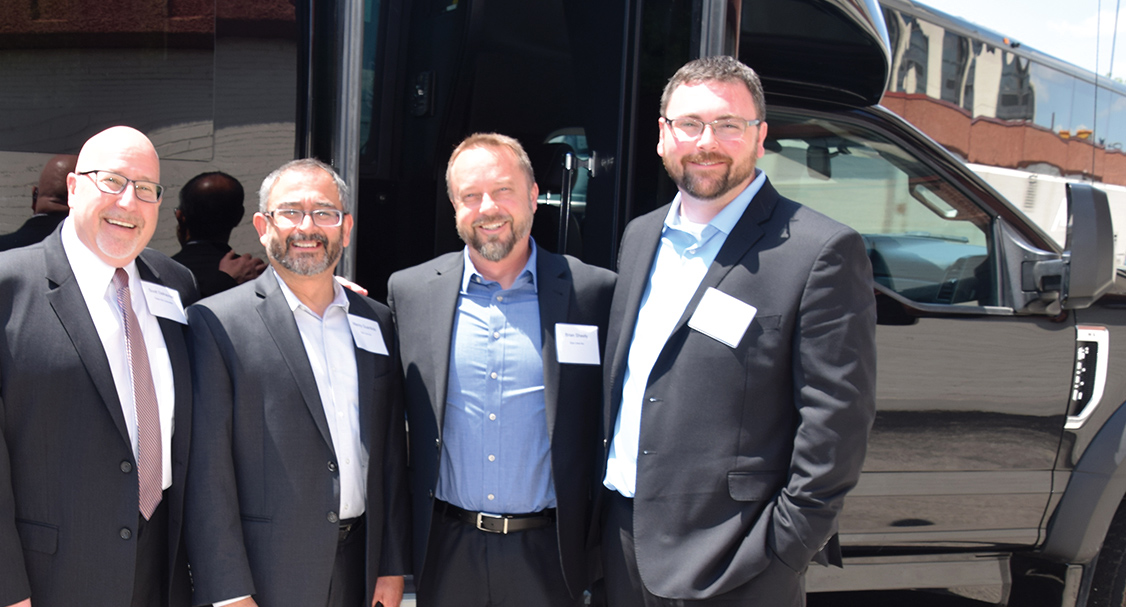 L to R: ILLBA Director Scott Delheimer of Class Act Limousine, Manny Guardiola of Epic Limousine, ILLBA Director Brian Sheely of Epic Limo, and Bill Battisti of ­Nationwide Bus Sales “I would have to say that having John Murphy there was a highlight of the event,” Raimer said, adding that Murphy and ILLBA continue to forge a strong working partnership that has been invaluable to member education—and demonstrates that the industry “just wants to ask the right questions so they can do the right thing.” “He brought two state troopers with, which I think really made a big difference: It made the message that enforcement is not an ‘us against them’ situation even more powerful. Their focus on telling operators how to prepare their chauffeurs for what happens when they get pulled over was that they don’t need to be nervous, the troopers are just doing their jobs—they want everyone to be safe and they’re not here to put us out of business. It’s forums like this that allow them to further educate us so we can work together—which makes us better.” 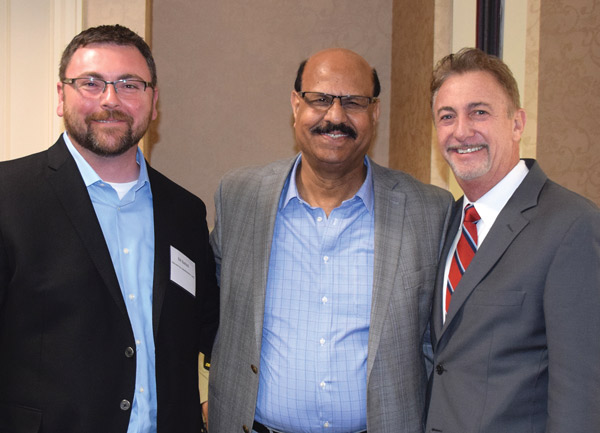 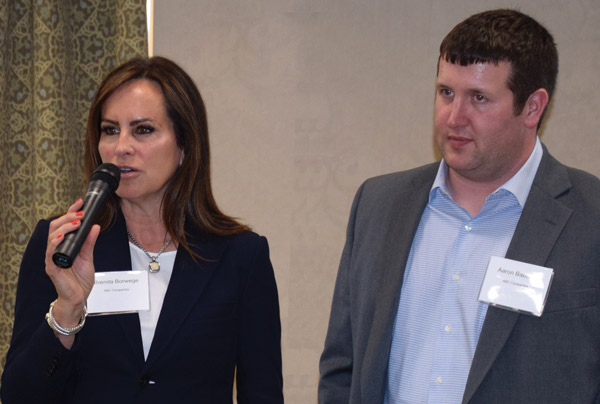 Brenda Borwege and Aaron Babcock of ABC Companiess The industry was represented by Florida Limousine Association President and NLA board member Rick Versace of A1A Airplort & Limousine Service and Chauffeur Driven Publisher Chris Weiss. Weiss explored matters immediately impacting the industry, while Versace enthusiastically praised the partnership between NLA and CD that was formalized earlier this year in an impassioned 45-minute presentation that inspired a sense of industry unity and ended with a standing ovation. CD was also a bronze sponsor of the yearly meeting, and Weiss is on the ILLBA board of directors.

Attendees then zeroed in on their companies from a service-selling selling standpoint when Maren Graham of The Hudson Group discussed digital marketing’s importance and how operators can maximize its payoffs as part of their marketing efforts. Then both Raimer and ILLBA Vice President Art Rento of Pontarelli Companies spoke on behalf of the Work Your Way Coalition: The group advocates for flexible working options for Chicago-area employees, as it aims to “educate legislators about the negative impact restrictive scheduling proposals will have on employees, employers and the city.” Formed as a response to the city’s attempts to enforce strict schedules on employees throughout the metropolitan area, the group is trying to fight ordinances that interfere with the inherently last-minute nature of ground transportation. 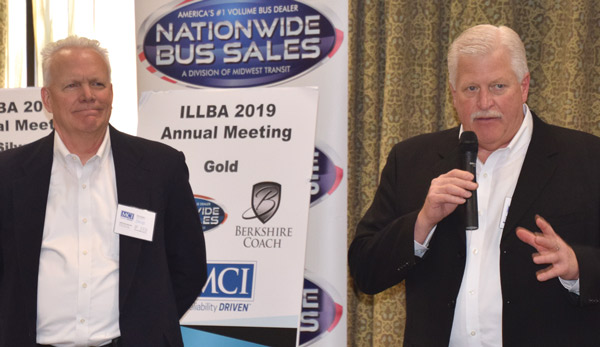 Robert Dethloff (left) and Rich DeYoung of MCI Before raffling off the day’s prizes and drawings, Deputy Commissioner Rupal Bapat and Iven Capifali from the City of Chicago Business Affairs and Consumer Protection provided further insight and updates into local concerns.

Among the day’s lucky winners was Kathy Kahne of Windy City Limousine & Bus, who won a pass to the 2019 CD Show in Boston this October 13-16. Visit illinoislimousineassociation.com for more information.    [CD0619]