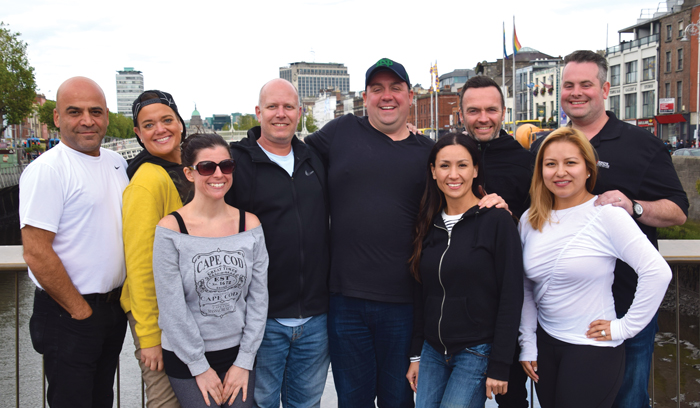 L to R: Tony Mehdiof of North Point Global Transportation, Kristen Carroll of The LMC Group, Melissa Lodi, CD Publisher Chris Weiss, AJ Thurber of Grech Motors, Colin Devine and Lien-Ire Yong of Devine’s Worldwide, and Matt and Xochitl Assolin of Nikko’s Worldwide on the Millenium Bridge in Dublin The concept of Family is an ever-present concept in the chauffeur ground transportation industry. We all know that the backbone of the biz has always been the family-operated companies who have extended the definition of family to include their regular clients and employees. But, more recently, it’s increasingly common to hear operators talk about their “limo family” in reference to the close friends and colleagues they’ve made through associations, trade shows, and peer groups.

Never has there been a more poignant demonstration of the “limo family” than a recent trip to Ireland taken by Grech Motors Vice President of Sales & Marketing AJ Thurber, Kristen Carroll of The LMC Group and her girlfriend Melissa Lodi, Tony Mehdiof of North Point Global Transportation, and Matt and Xochitl Assolin from Nikko’s Worldwide. 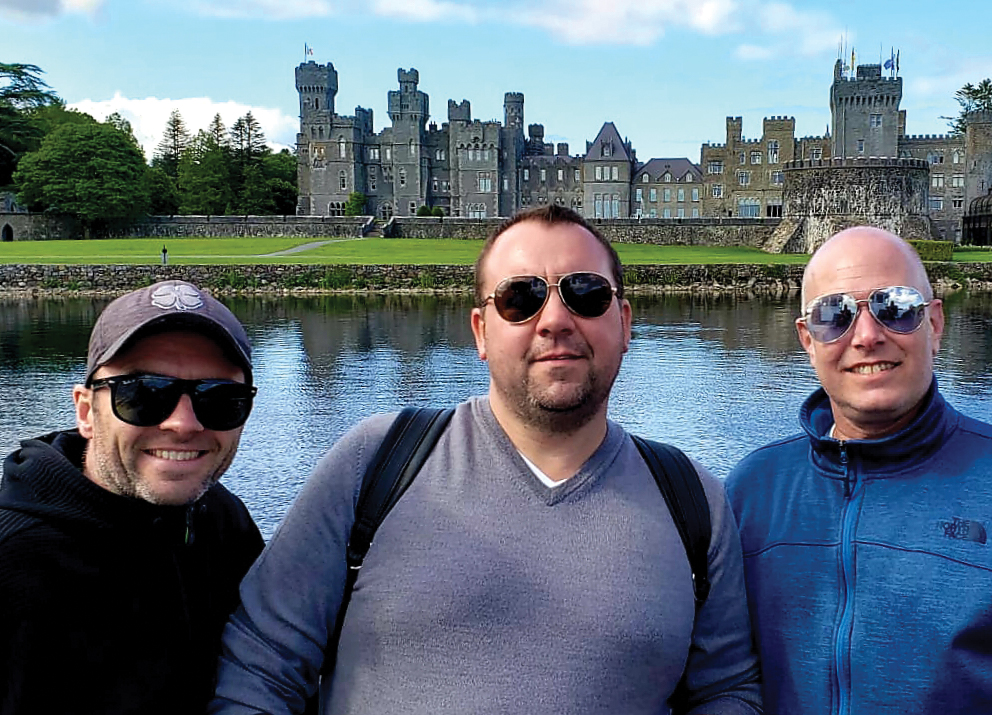 Ashford Castle on Lough Corrib “AJ and I had been talking about a trip to Ireland for some time,” says CD Publisher Chris Weiss. “But for various reasons the stars never aligned.”

Thurber and Weiss’ plan for their proposed trip was multifaceted. In addition to seeing the country and spending time in Dublin with their friend Colin Devine of Devine’s Worldwide Chauffeured Services, Thurber wanted to fulfill a promise to his late mother to spread her ashes on the Emerald Isle. Eventually, however, schedules freed up, and tickets were booked for a getaway in late-June.

While many hosts would be thrown off by a last-minute change, Devine saw it as the more, the merrier. “Initially, it was supposed to be a small trip with me, AJ, and Chris, so I was really excited before about having them come visit,” says Devine. “I wanted to give them a chance to get out and see the Irish countryside.” 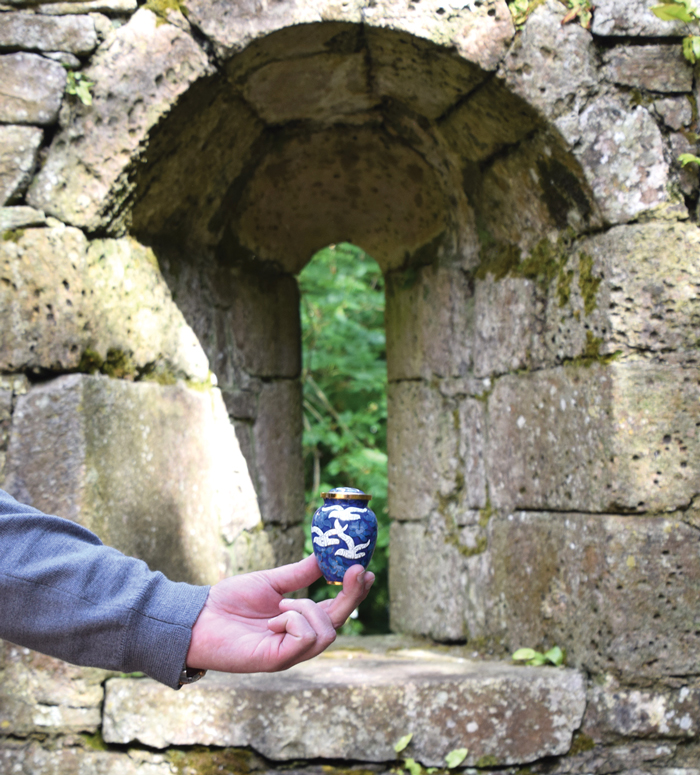 Paying tribute to Thurber’s mother at St. Patrick’s Church on Inchagoill Devine took great effort to ensure that his guests had a true Dublin experience, along with first-class accommodations. His team of chauffeurs—which Mehdiof called “the best in the world”—took the group on personal bottling at the Jameson Distillery, a five-star meal from Devine’s brother and celebrity chef Dylan McGrath, not to mention the prerequisite pint of Guinness in a local pub. But Devine realized that there was more to the trip for Thurber than a short getaway with friends, so he trusted two of his best employees to plan the memorial service.

“Two of our chauffeurs, Niles and Declan, pulled out all the stops. They arranged for us to visit a 5th Century burial site on the island of Inchagoill in Lough Corrib. It’s the birthplace of Christianity in Ireland, and it is a pretty magical place,” says Devine. 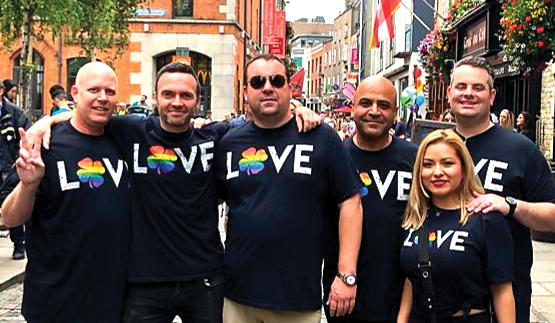 All you need is love, in downtown Dublin Weiss was floored by the planning and hospitality demonstrated by the Devine’s Worldwide team. “I’ve experienced the legendary ‘Devine hospitality’ before when I came to Ireland a few years ago, and I’ve raved about it non-stop since then. Somehow, though, Colin and his fiancé Lien-Ire managed to top themselves. Not only did they roll out the proverbial red carpet, but the service provided by our chauffeur Declan was truly world-class. He was knowledgeable, gracious, and fun.”

With Declan behind the wheel, the group made their way west and got to see Galway and the area around Connemara, which has quite a unique landscape, and is a beautiful part of the country. Ultimately, Thurber spread his mother’s ashes over the majestic Cliffs of Moher, which was a powerful and solemn event for the “limo family.” 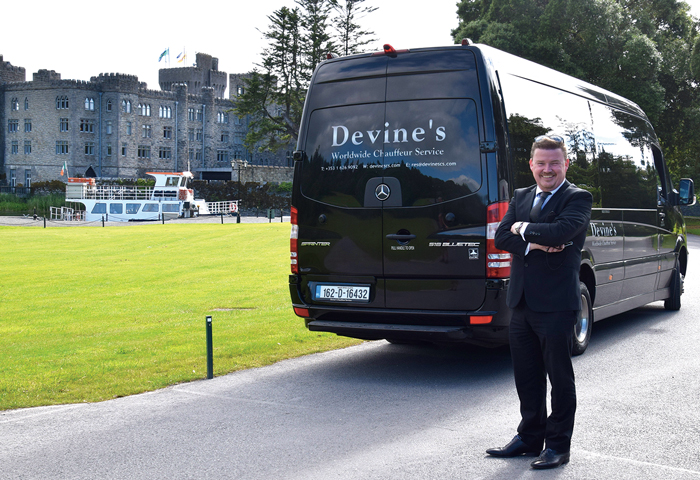 Devine’s Worldwide Chauffeur Declan O Callaghan “I’m honored to have found such great friends in this industry. Having them be with me on this amazing trip was truly a once-in-a-life experience that I don’t think any of us will forget. I can’t thank Colin and his team enough for their kindness and hospitality,” says Thurber.

The trip was similarly memorable for its host.

“The way AJ shared the experience with us, it made us feel like we were part of something special,” confesses Devine. “Seeing those landscapes at the edge of Ireland where the next stop is America, I felt like I was a tourist in my own country. I’ve seen those places before, but not with this company, which made it fresh for me.”    [CD0919]