Author and entrepreneur Russell Brunson has made “funnel hacking” a thing, but back in 2007, before anyone knew of Brunson or his ClickFunnels system, I built my first “funnel” using HubSpot. HubSpot was less than a year old at the time, and it was hardly well known, but it was the true pioneer of building funnels through creating valuable content primarily through blogging and social media, then capturing an email address, and ultimately sending a sequence of emails designed after the sales cycle. 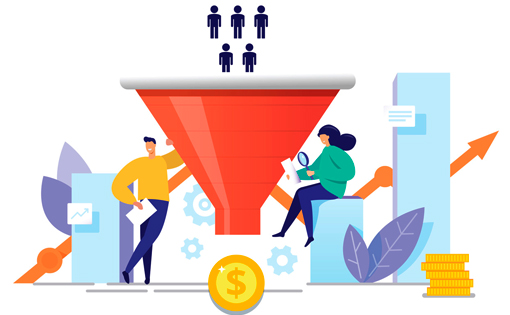 It was back then and still can be a little today, but funnels have become a necessary component to increase revenue and profit in any business—and the chauffeured transportation industry isn’t exempt.

There is no question that I wouldn’t have doubled my revenue during the Great Recession in 2009 and 2010 if I wasn’t creating funnels (i.e., automated follow-up emails) and I’ve seen similar, and even better, results from operators implementing them prior to and during COVID.

The late Ken Carter of Aadvanced Limousines was one of my early students and the first operator I helped build sales funnels with in early 2015, which was shortly after I launched Limo University.

Although he was apprehensive at first, once Ken got a taste of the automation, time savings, and conversion rates from click to lead to customer, he was hooked. So much so that he probably spent more time building funnels and automation into his company than I did over the next 2-3 years—and this was before AddOns (Limo Anywhere) came onto the scene.

Speaking of AddOns: I see them as the new HubSpot in our industry as they have the most advanced quoting and automation system available that integrates directly with Limo Anywhere. This isn’t an ad for AddOns, but I do find that their product is one of the more valuable tools right now for capturing and converting sales.

“... no one in our industry, in my experience, is doing it like Sam Rubin of Four Seasons Concierge. Sam has been the proverbial poster child for implementing automation and dynamic pricing into his funnels via LQC over the last 2-3 years and has doubled his business doing so during COVID.”

I have seen operators like Kirk Bagger of Captain’s Car Service implement AddOns’ Lead Quote Close (LQC) tool to automate his quotes and conversion of the new trips and increase revenue by more than 60 percent over 2019 levels.

But, no one in our industry, in my experience, is doing it like Sam Rubin of Four Seasons Concierge. Sam has been the proverbial poster child for implementing automation and dynamic pricing into his funnels via LQC over the last 2-3 years and has doubled his business doing so during COVID.

Sam implemented the trifecta by starting with automation. He employed LQC in 2019 by automating the quoting process to where his website visitors could obtain a real-time quote.

It didn’t stop there, though, as sequenced follow-up emails were added (i.e., the funnel) to increase the conversion rate of the quotes that were obtained. This dramatically increased his conversion rates and revenue.

Last came the dynamic pricing implementation inside the initial quotes to maximize delivered rates and increase profit. This has taken some time (months, even) to perfect, but he has now increased his profit by more than 30 percent since adopting dynamic pricing via LQC.

Couple the dynamic pricing with the email and even SMS follow-up funnels and automation and you have a successful recipe for a potential doubling of revenue.

Furthermore, very few (if any) companies have the time to manually track inventory, booking lead times, driver availability, etc., and increase and decrease rates in real time by hand as they deliver 25-35 customized quotes each day.

This is where the trifecta crushes the manual process from a conversion, profit, and labor standpoint—and all of you can implement this on your own. You don’t need a marketing agency or a $2,000/month piece of software like HubSpot. You can do this with a tool like LQC, which was built specifically for small and medium-size operators in our industry.

I do want to emphasize that the point of this article is not solely about the value of LQC; it is about what it helps you accomplish. Otherwise, you are going to have to integrate multiple pieces of software and technology to try and replicate it by connecting with other technology like Zapier.

Regardless of which path you choose, please learn from the success of your fellow operators and their vision, which has blazed down a path that very few had walked prior to them.

They took a chance. They believed. They failed. They tried again. And now they are reaping the benefits of their vision—and you can too.   [CD0122]

Bill Faeth is the founder of Limo University. He can be reached at bill@limogrowth.com.