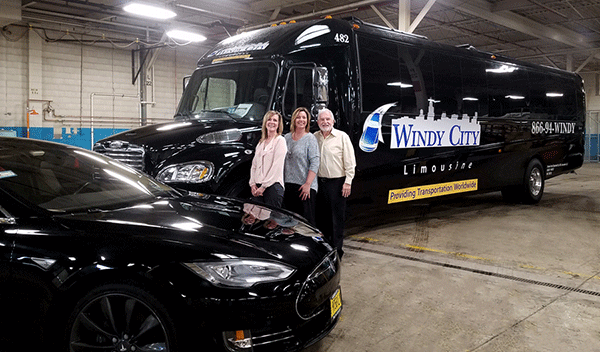 Jacobs says this group was chosen because “CTG and all of its affiliated companies were absolutely a standout. We have the same culture, willingness to serve, ethical standards, and the same operating software. They have been our primary farm-out company in Chicago for years, just as we are theirs.”

The merger increases Windy City’s fleet to over 300 vehicles, 400 employees, and a combined revenue of over $30M. “It is reasonable for us to grow 4-6 percent this quarter,” Jacobs adds. “For the year we look to achieve double digit growth beyond what CTG has brought to the table. We are well equipped to handle it.”

CTG has been under the leadership of Tracy Raimer, who will join Windy City as vice president of operations. Raimer has enjoyed a long relationship with Jacobs. “It is true, about 20 years ago I embarked to my first limo show in Vegas,” Raimer says. “I specifically searched for George thinking he would be more open to talking to me about my business. For the next few years I would bounce questions off of George and still do to this day. It certainly feels as if we have come ‘full circle’.”

“I am excited for some key staff members of CTG and the opportunities that Windy City will provide for each of them,” states Raimer. “Namely Erica Shor will continue in her Affiliate Manager’s position and forge new relationships within the industry as well as ‘show off’ all the new amenities she can now offer. In addition, lead dispatchers Curt Strandemo and Nick Georgiev will be working with increased staff, and it will be fun watching each of them grow within their positions.”