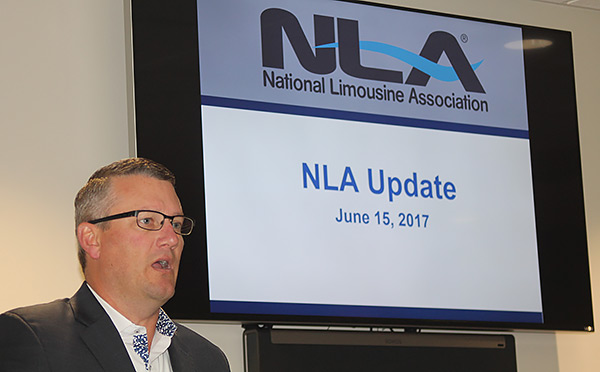 NLA President Gary Buffo of Pure Luxury Transportation was one of the meeting’s guest speakers Chesapeake, Va. — Sonny Merryman Bus Sales hosted the June 15 meeting of the Virginia Limousine Association (VLA). More than 40 members, vendors, and guests were in attendance for the event, which was jam-packed with speakers and guests. In attendance was CD Industry & Brand Ambassador Philip Jagiela, who also serves as executive director for the VLA.

Jagiela began the meeting with an introduction of the its sponsor and host Floyd Merryman the owner of Sonny Merryman Bus Sales, who provided some background of the company and the facility.

Next, VLA President Paul Walsh welcomed the members and attendees, and then introduced the vendor members present—Jay Snead with Prevost Bus Sales, Joe Lalla with Georgetown Insurance, and Ryan Hilberth with Book.limo/Rental Limo—before delivering the association’s financial report. Walsh then gave the floor to Dean Farmer from Sonny Merryman, who thanked everyone for attending the meeting and expressed his interest in hosting another event. 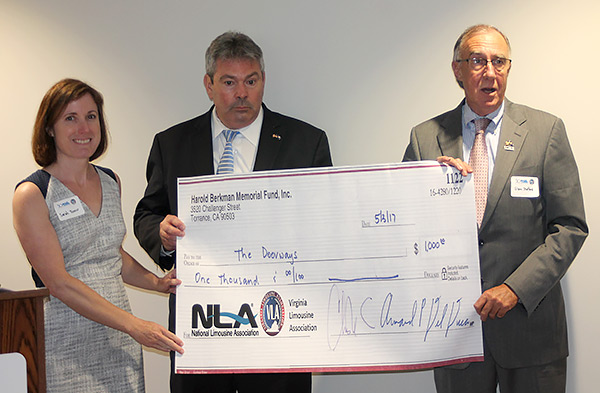 L to R: Sarah Tunner of The Doorways Between Healing and Home accepts a check from VLA President Paul Walsh of Superior Executive Transportation and Glenn Stafford of Love Limousine on behalf of the association Walsh then gave a warm and enthusiastic welcome to the event’s keynote speaker, NLA president Gary Buffo of Pure Luxury Transportation, who encouraged all VLA members to get involved on a national scale. He provided an overview of NLA’s recent accomplishments and legislative victories, and then discussed the value propositions that the association offers. After an update on recent NLA initiatives, including the Day on the Hill, Buffo presented the VLA with a $1,000 check in recognition for the association’s exemplary efforts. That check was then turned over to Sarah Tunner, the director of development of The Doorways Between Healing and Home, a local charity that provides temporary housing and non-medical service 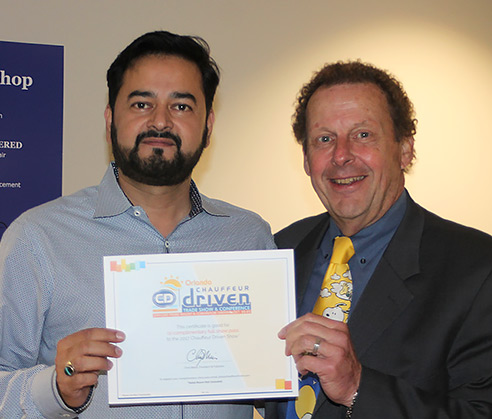 Afazal Iqbal of American Executive Sedan (left) won a pass to the Chauffeur Driven Show in Orlando that CD Industry Brand & Ambassador Philip Jagiela raffled off during the meeting Speakers representing the legislation and regulation side of things were next on the docket. First up was Glenn Davis, a member of the Virginia House of Representatives, who holds a seat on the state’s transportation committee. Davis provided an overview on House Bill 2019, which would repeal the need for TNCs to register as a commercial vehicle and allow state police to recognize inspections from other states. As a believer that market dictates the future, he defended his support of the bill to the VLA, but said he’d be willing to explore reducing regulations for the livery industry. Barbara Arkwright with the Virginia Department of Motor Vehicles followed Davis and provided information on new enforcement measures, but stressed her department’s willingness to work with VLA.

Glenn Stafford of Love Limousine and Barry Gross of Reston Limousine followed updates to the VLA bylaws. Changes were proposed to the general membership for adoption, and were approved unanimously. Gross then announced that board elections will be held in the near future, and will provide details on the nomination process imminently. As a part of the VLA charity committee, Stafford solicited input from the members as to which charity should benefit from a recent $1000 award he received. He was followed by John Oulton of Richmond Limousine who serves on the VLA communication committee. He shared his plans to elevate social media efforts and create a bimonthly digital newsletter with help from the membership. 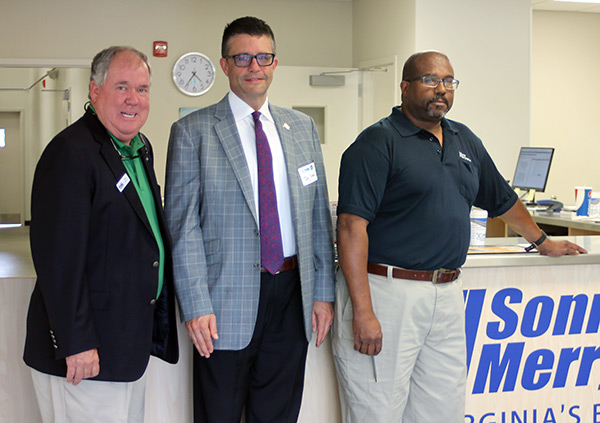 Members of the Sonny Merryman Bus Sales team, which both hosted and sponsored the meeting The evening’s last speaker was Barry Trabb of Complete Fleet Livery Sales of Union, N.J. An ardent industry supporter, Trabb offered VLA members a sponsorship program that would give them $100 gift card for every vehicle purchased along with a $100 rebate back to the association.

The meeting concluded with a handful of raffles and door prizes, which included gift cards for Reston Limousine and Superior Executive Transportation, two Starbucks cards courtesy of PALM Association Management and Consulting, 1,000 business cards from Create-a-Card, and a full pass to the Chauffeur Driven Show in Orlando this October. The pass was won by Afazal Iqbal of American Executive Sedan.

The next VLA meeting is scheduled for August 7 in the Charlottesville region.