NLA’s Day on the Hill Heads to Washington, D.C. 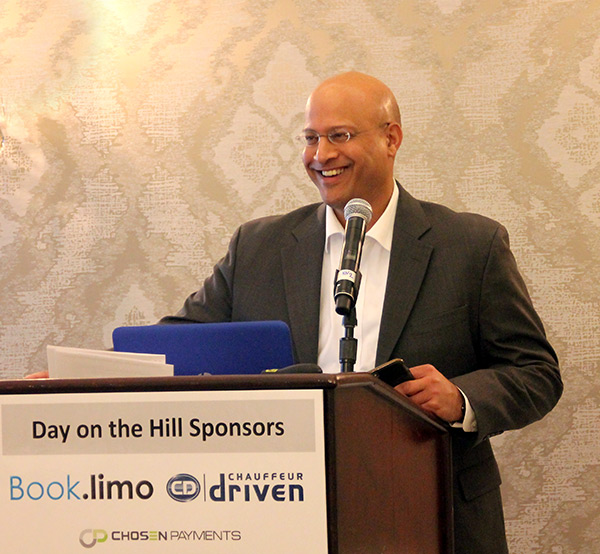 Manesh Rath of Keller & Heckman Washington, D.C. — In an auspiciously timed event, the National Limousine Association (NLA) and more than 60 industry representatives from all over the country headed to Washington, D.C. from June 13-14 for the annual lobbying excursion, Day on the Hill.

As with years past, TNCs were at the forefront of the message that operators and vendors alike brought to their legislative representatives; this time, however, the focus was on enforcing the Fair Labor Standards Act and the misclassification of TNC drivers as independent contractors rather than employees.

According to the NLA’s Legislative Priority declaration, “TNCs claim that they are simply a technology platform and not a transportation company, but the fact that drivers are required to promote Uber’s brand and Uber reserves the right to suspend or deactivate drivers based upon performance makes the clear case that they should be considered full employees.”

The document goes on to assert that “[b]y misclassifying employees as ICs, Uber and Lyft deny drivers basic workplace protections with no overtime or benefits causing drivers to be reliant on Medicaid, food stamps and TANF [Temporary Assistance for Needy Families]. Also, this reduces federal, state and local tax revenues and robs unemployment insurance and workers’ compensation funds by billions.” 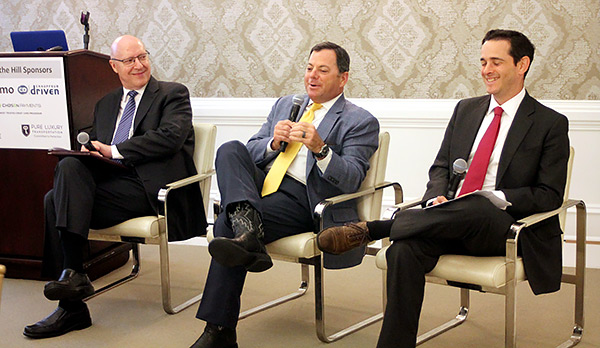 The Gig Economy Panel with (L to R) Al LaGasse of Taxicab, Limousine & Paratransit Association, Louie Perry of Cornerstone Government Affairs, and Craig Kalkut of the American Hotel & Lodging Association On Tuesday, the legislative event kicked off with a Board of Directors meeting at the downtown St. Regis Hotel. Those in attendance discussed regulatory and legislative issues, prepared for the next day’s meetings, and heard reports from NLA’s committees and staff alike.

The remainder of the day was dedicated to a host of impassioned, insightful speakers who represented ground transportation, corollary industries, the media, and legislative affairs, which NLA Legislative Committee Co-Chairs Scott Solombrino of Dav El/BostonCoach and Robert Alexander of RMA Worldwide Chauffeured Transportation kicked off with a joint introduction.

Todd Webster of Cornerstone Government Affairs, the public affairs firm that has been assisting the NLA with its lobbying efforts for several years, highlighted how the first 100 days of the Trump presidency have affected national affairs in general and the chauffeured ground transportation industry in particular. Louie Perry, also of Cornerstone, updated those in attendance on TNCs’ rough 2017, urging battle-weary operators “not to let up the pressure on legislators.” He observed that “this could be the start of something very good for us”—which proved to be true not only mere hours later when the New York Post broke the news of how State Labor Judge Michelle Burrows had ruled that Uber drivers should be classified as employees (you can read the article at goo.gl/UIItlr) but also days before Uber CEO and notoriously divisive figure Travis Kalanick resigned from his position.

Solombrino then introduced Shannon McDermott, a journalist whose articles for The Huffington Post helped the luxury ground transportation industry find the personally invested media support its message needed. McDermott spoke of her own run-in with a gypsy cab driver in Brooklyn who refused to let her out of his vehicle when she wouldn’t pay a full fare for sub-par service, which opened her eyes to the dangers of TNC drivers not being thoroughly vetted for safety. She offered actionable items for helping the NLA get its message out, methods of crafting a sincere case for common sense laws, and how to reach the audience who needs to hear about the threat that TNCs pose, especially women’s groups who can advocate for passengers who have suffered various abuses at the hands of TNC drivers. 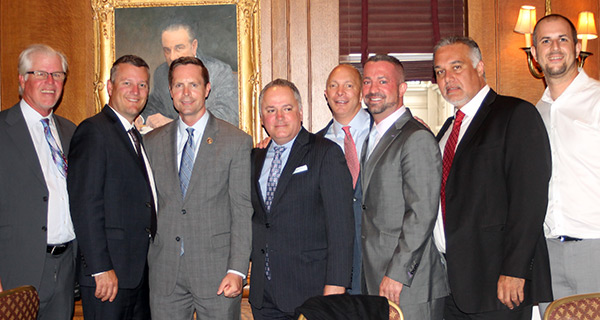 Members of the NLA with Congressman Rodney Davis of Illinois (third from left) “The truth is on your side,” she told the packed room. “Nice guys finish last when jerks find a back door. You have to target your pitches and produce your own content if you want to hit ‘em where it hurts.”

Manesh Rath of Keller & Heckman discussed the question of independent contractors and persuading the Department of Labor to see that TNC drivers are “de facto employees if all rules apply”; especially in regard to the limitations their companies place on them in terms of mandating how they do their jobs and procedural dictation.

Perry moderated the Gig Economy Panel with Taxicab, Limousine & Paratransit Association (TLPA) CEO Al LaGasse, who had just finished his own association’s fly-in days to lobby for its members’ primary concerns, and Craig Kalkut of the American Hotel & Lodging Association, whose experience with a disruptor in the form of Airbnb was eerily reminiscent of this industry’s ongoing battle with TNCs.

The educational session capped off with words of advice from Nora Todd, Labor Policy Director for Ohio’s Senator Serrod Brown. Sen. Brown had recently issued a paper “Working Too Hard for Too Little” that outlined how companies are showing record profit but not sharing the wealth with their employees, a familiar story for anyone following the dirty dealings of TNCs and how their drivers are routinely shafted in both pay and company support.

“There is a fundamental dignity in all types of work,” she said. “Workers of all types should share in the wealth they create.” 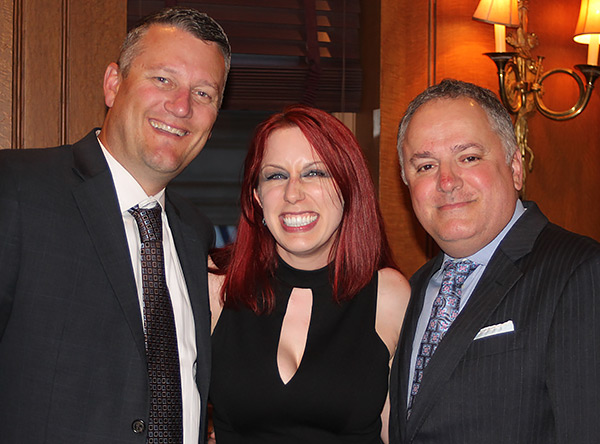 L to R: NLA President Gary Buffo of Pure Luxury Transportation, CD Editor Madeleine Maccar, and Scott Solombrino of Dav El/BostonCoach Todd added that the gig economy is neither something new nor deserving of the special dispensation it receives, especially when TNCs tout themselves as technology outit to sidestep the regulations within which transportation companies exist.

It was then off to the NLA PAC Fundraiser at nearby Occidental Seafood & Grill, where Congressman Rodney Davis of Illinois received a warm welcome and offered tactics for helping the NLA’s message reach TNC-friendly entities and ways to appeal to their better angels while strengthening the industry’s relationship with government representatives.

“Every decision we make impacts every American citizen,” Congressman Davis said of his fellow elected officials. “Our constituents come first but compromises bring people together and keep our children safe. Any opportunity for increased safety is first and foremost.” 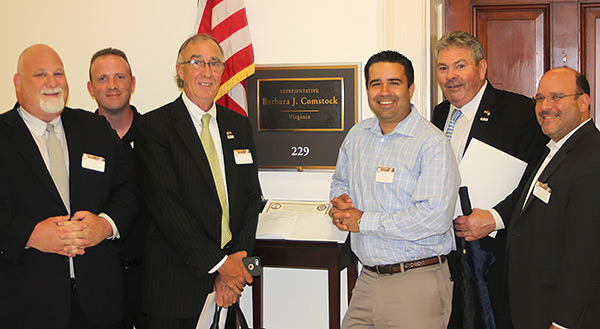 L to R: Barry Gross of Reston Limousine, Brian O’Neill of Grech Motors, Glenn Stafford of Love Limousine, John Oulton of Richmond Limousine, VLA President Paul Walsh of Superior Executive Transportation, and Tony Simon of Reston Limousine And the next day’s boots-on-the-ground efforts to personally reach representatives and their staff were considered a largely successful endeavor in getting the NLA’s message out before a well-deserved dinner at Sidecar.

“Knowing the amount of time, energy, and dedication it takes to plan an annual event that literally takes a year of planning, discussing, evaluating, tracking, and strategically aligning The Plan for a positive momentum forward for our industry, I was absolutely thrilled with all of the successes we had this year,” said NLA President Gary Buffo of Pure Luxurty Transportation. “We've had some bad years on the hill, but this year, I'm confident we've created some momentum that aligns within our plan.”