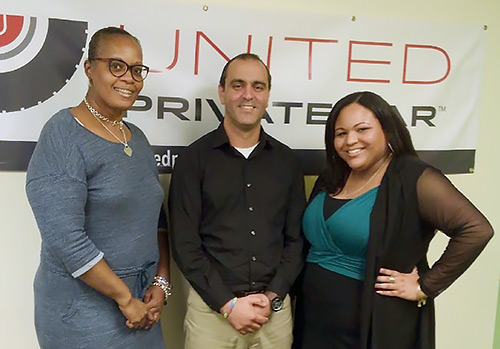 L to R: Yolanda Washington, Yacine Mafhoum, and Rosanna Velasquez Boston — United Private Car is pleased new announce the addition of three employees to their management team
Yacine Mafhoum has been promoted to dispatch manager, Yolanda Washington has been hired as client services manager, and Rosanna Velasquez has been promoted to business development and affiliate coordinator. Each of them will report to General Manager Lew Aflalo, who came to United Private Car in January, 2017.

“These additions will help streamline the company’s departments and allow me to oversee the daily operations with an additional layer of accountability. I am excited to grow the leadership team from both within and outside our company,” Aflalo said. “Having experienced leaders come on board will position us well for both organic and affiliate growth, as well as increase the efficiency of our business.”

Mafhoum has been at United Private Car for two years, most recently as dispatch supervisor. Washington comes to United with 10 years of industry experience, having worked at another Boston area operator. Velasquez, already employed part time at United as a CSR, brings her business administration and marketing background to the team.

Established in 2006 by co-owners Terry Murtaugh and Jason Dornhoffer, United Private Car has grown annually and has made the Inc. 5000 list the previous two years, making it one of America’s 5000 fastest growing private companies.