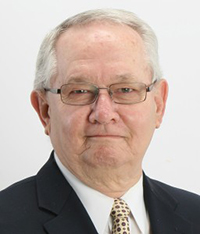 Once President Paul Walsh of Superior Executive Limousine called the evening meeting to order, a slate of speakers representing various aspects of the industry provided their respective insights to the 25 people in attendance.

Bill Kerr of Camryn Limousine welcomed the group to his facility, where they were treated to a barbecue dinner. He spoke about how he balances his dual responsibilities of and passions for the chauffeured ground transportation industry as well as being a full-time firefighter for Charlottesville.

After the meeting host spoke, Jeffrey Ward took the mic on behalf of the meeting sponsor, Executive Coach Builders, which also had a bus on display. Ward, too, has answered the call to serve by being on active military duty until recently; his return to the industry was met with a warm welcome from the VLA audience. 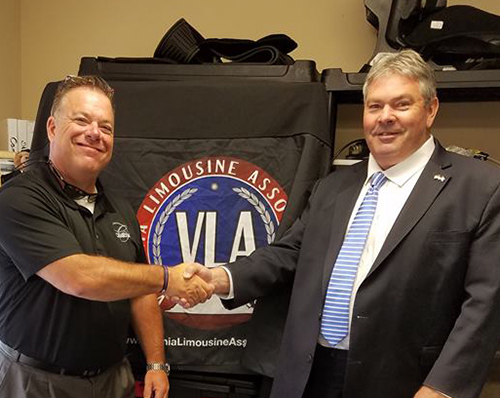 Bill Kerr of Camry Limousine (left) and VLA President Paul Walsh of Superior Executive Sedan Represented vendors also included MCI, Georgetown Insurance, and Sonny Merryman; the latter also had provided a vehicle for the meeting, and its motorcoach was open to all the meeting attendees for a closer look.

Keith Johnson of Reston Limousine was the meeting’s keynote speaker. Having developed an intense course that focuses on the safety procedures, core knowledge, and current regulations that operators and their driving teams need to understand and abide by, Johnson presented the audience with the ins and outs of the B.A.S.I.C.S. program that he and Reston’s RLS Management Services division offer to the industry—especially those companies that have motorcoaches in their fleets.

Barbara Arkwright, the special agent in charge of the Virginia DMV Enforcement Division, was also a featured speaker at the meeting. VLA members continue to benefit from a relationship with the local regulatory body’s enforcement arm, and Arkwright was ready to provide additional information to assist them. She reminded them that operators have a chance to make their collective voices heard through the DMV’s ongoing stakeholders study meeting, as the results of the meeting will be presented to the General Assembly this fall.

The meeting also included internal business, including the unanimous decision for the next association meeting to include both board nominations and the election. It also saw a request to offer additional opportunities for operator members to serve on VLA’s various committees.

VLA will hold its next general membership meeting in the Richmond area October 2.