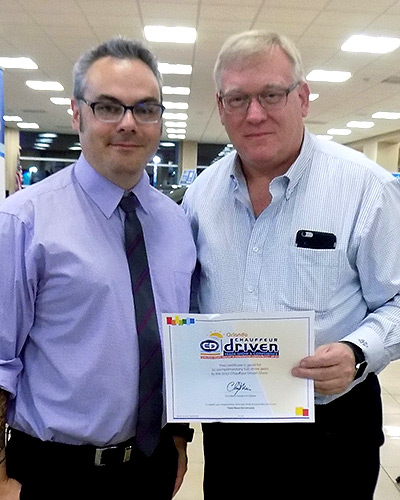 After a buffet dinner, PRLA President Steve Rhoads of Rhoads Limousine kicked things off with a brief overview of proposed legislation in the state capital affecting the FHV industry. Recently Pa. State Representative Francis X. Ryan filed an amendment that would remove Philadelphia Parking Authority (PPA) oversight over the taxi and limousine industries. With the PPA in a state of “implosion”—due to layoffs and a lack of revenue—the auspices of the city’s FHVs may turn over to the Public Utility Commission. The PRLA’s lobbyist promises to keep the association informed of any further developments. 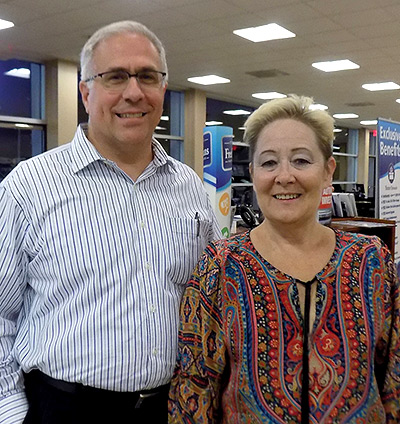 Anthony Oranato of Anthony Limousine with CD Business Development Manager Rickie RobertsRhoads also recounted a recent phone conversation he had with a taxi driver in Scranton, who recounted the city’s situation with the TNCs. He said that “Uber is killing” the taxi industry upstate, and was looking for advice from PRLA. Rhoads gave the driver an open invitation to attend future meetings.

Next two representatives from T-Mobile addressed the group, providing an overview of the products and services they offer the ground transportation industry. Then, Chris Burns, Fred Beans’ livery sales and leasing consultant, thanked the members for attended and encouraged them to browse the showroom. He also informed them of an extended warranty on a few new models.

Following a round table discussion regarding vendor demonstrations at future meetings, a pass to the 2017 Chauffeur Driven Show was raffled off by Smentek and Roberts. The winner was Doug Kemmerer of Corporate Limo in Breinigsville. Lastly, with new board elections coming before the year’s end, Rhoads, asked any members interested to consider throwing their name into the ring. The meeting then concluded with a showroom/lot tour.