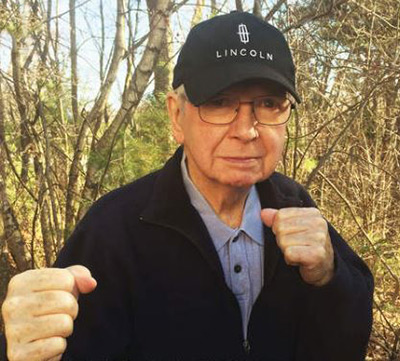 "Papa John" Campbell Michael John Campbell of Goffstown, N.H., passed away on December 9 at the age of 91. Affectionately known to family and friends as “Papa John,” the Grace Limousine employee gained admiration in and out of the industry, especially once he went viral via an online video.

Born in Glasgow, Scotland, on November 8, 1926, he served in the Scottish Highland Regiment, and was a veteran who saw duty in Palestine during World War II. After the war, he also worked as a coal miner in Stoke on Trent, England, for many years. After coming to the U.S., he had been employed by St. Johnsbury Trucking in New England.

After his retirement, he became a constant fixture at Grace Limousine, a company founded by his son, Ian, and later taken over by grandson, Michael. There, he put in a staggering seven-day work week, assisting with Grace’s day-to-day facility operations.

At age 89, Campbell took part in the #22KILL online campaign to raise awareness of veteran suicide. He was captured on film performing 22 push-ups for the promotion, which was seen by roughly 40,000 Facebook viewers.

“Papa John was one of a kind, and the most generous, grateful person you could ever hope to meet,” said grandson Michael Campbell, current owner of Grace. “He will be deeply missed by his Grace family, and by the many industry friends who have also come to know and love him. The Campbell family would like to extend our gratitude to all our friends and colleagues who have reached out with words and gifts of condolence, and who took the time to attend his service. We appreciate it more than you know.”

Chauffeur Driven would like to extend their deepest sympathies to the Campbell family and the employees at Grace Limousine.