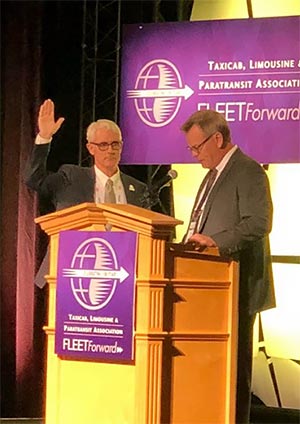 Outgoing TLPA President Mike Pinckard (right) swears in the association’s 2018-2019 president, Terry O’Toole of Transdev On Demand Las Vegas — The Taxicab, Limousine & Paratransit Association (TLPA), the oldest and largest transportation association of its kind in the country, took the first step on its new path after its outgoing president unveiled a new strategic plan October 28.

Mike Pinckard, who just ended his one-year term, made strategic planning a central part of his 2017-2018 TLPA presidency.

“TLPA will be the go-to resource for a wider audience than ever before, and with a perspective that shapes today’s transportation world,” said Pinckard, who delivered his final address to association members as they gathered for the group’s landmark 100th Annual Convention & Trade Show in Las Vegas.

After a year of thought-provoking planning sessions to identify the road ahead into the next decades, the TLPA’s vision for the future now rests on four key pillars:

Four committees are now tasked with implementing TLPA’s strategic plan: The Executive Committee will focus on making sure the association thrives and remains a unified voice for the industry; the Member Services Committee will create programs for members that improve service delivery and create competitive advantages; the Advocacy, Policy and Government Relations Committee will shape the future of Mobility-as-a-Service to promote diversified business models; and the Driver Workforce Development Committee will lead efforts to make the driving profession a rewarding and financially viable career.

Also during the centennial convention, Kansas City transportation executive Terry O’Toole of Transdev On Demand was elected as TLPA’s new president. O’Toole, overwhelmingly elected by voice vote from the rank-and-file membership, was immediately sworn in to serve a one-year term until October 2019.

In his acceptance speech, O’Toole outlined his platform for presidency, which includes broadening membership, expanding member services, improving driver professionalism, and honing TLPA’s leadership as a unified voice of the industry.

“The transportation landscape is expanding, not shrinking,” O’Toole said. “Our industry is evolving in exciting ways that are filled with opportunity. With an invigorated association, and with the incredible knowledge and know-how of our members, our industry will thrive in the years ahead.”

The transportation industry has been a part of O’Toole’s family history dating back to the late 1800s, when his great-grandfather and his brothers owned street cars in Kansas City. While O’Toole did not grow up in the industry, he became general manager for Kansas City Transportation, owned by businessman Bill George, in 2001.

“Bill encouraged me to experiment with ideas to see what worked,” O’Toole said. “He also taught me that this business is about people, and about how you treat people, whether drivers, or employees or customers. They are all equally important in the chain.”