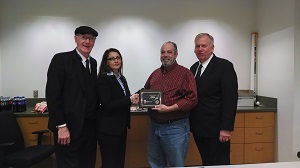 Jerry Thomas, formerly of Prime Time Limousines, has stepped down as treasurer of NCLA after selling his company. NCLA thanked him for all his hard work and fellowship before announcing that Vernon Gambill of Black Tie Transportation will take up the baton as the new treasurer in Jerry’s stead.

Jon McCormick, U.S. DOT division administrator, discussed compliance with DOT regulations of safety, licensing, and insuring vehicles over 15 passengers. McCormick asserted that the agency “has difficulty witnessing many violations because a DOT officer’s work is not performed on the weekends or evenings when many trips commence.” McCormick made his information available to the group for assisting in investigations into operators not operating under DOT regulations. President Carolyn Henson of Prestige Limousine recommended that one person from NCLA be a means of bringing information to the DOT to simplify and to avoid increasing the workload on DOT personal.

Ground Transportation Manager at Raleigh-Durham Airport Authority, Laurie Suggs, then took the podium. Suggs disseminated a good deal of information regarding the new terminal, Terminal 1, at RDU. First and foremost, it was determined that “Limo Zone 4” (denoted by a brown sign) is the area that all for-hire vehicles will be required to pick up and drop off passengers. Suggs strongly suggested to call ahead if passengers would need assistance in this drop off/pickup area, and it was made known that no cameras will be focused on the area. Suggs then shifted gears to discuss the renewal of RDU stickers for livery vehicles. Renewals soon will be able to be accessed online via the RDU web site, and operators will be able pay for the new sticker with a credit/debit card. The renewal period for these stickers has also been extended by one month until the end of April.

Suggs concluded the meeting by guiding interested NCLA members on tour of the new terminal, and all its amenities.