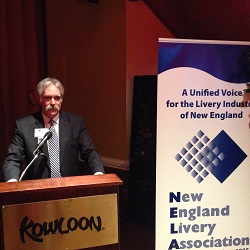 First on the agenda was a prickly issue that Connecticut NELA members are having with the NYC Taxicab and Limousine Commission (TLC) in regard to TLC officers inappropriately ending interstate travel jobs by removing chauffeurs, clients, and also impounding their vehicles, is one step closer to resolution. The TLC is now working with NELA due, in no small part, to the efforts of Lew Aflalo, general manager of Hoyt Livery. Aflalo initiated a meeting in the Constitution State with state legislators and representatives from the Connecticut Department of Transportation to formulate a broader plan to deal with these issues in short order.

NELA Chief Executive, Rick Szilagyi discussed the continuing efforts in Rhode Island to institute a minimum price floor for livery ($40), which was begun years ago in an effort to further clarify the lines between taxi and livery, and now is being challenged by app-only companies (Uber, SideCar, Lyft, etc.) entering that market. “The PUC plans to move ahead with another hearing on the issue,” says Szilagyi, “The $40 minimum charge we believe is in the public interest because it keeps them (Uber) as a non-taxi service, and that protects our industry and consumers from such things as surge pricing, and ensures the public is provided transportation in vehicles that meet safety and compliance regulations.”

Szliagyi also reviewed a plan to meet with the new Boston police commissioner, William Evans, who has previously stated that he views the app-only companies as “gypsy operators.” NELA Secretary Teale Smith of Maine Limousine closed out the meeting. Smith, who is also co-chair of the upcoming NELA Seminar & Tradeshow, gave an overview of the event itself, and the seminars (Insurance, DOT Operating Responsibilities, PCI Compliance, Quality Control in Your Office, Email Marketing, Social Media Marketing, and App Panel Discussion) that will be presented on April 22 at the DCU Center in Worcester, Mass.