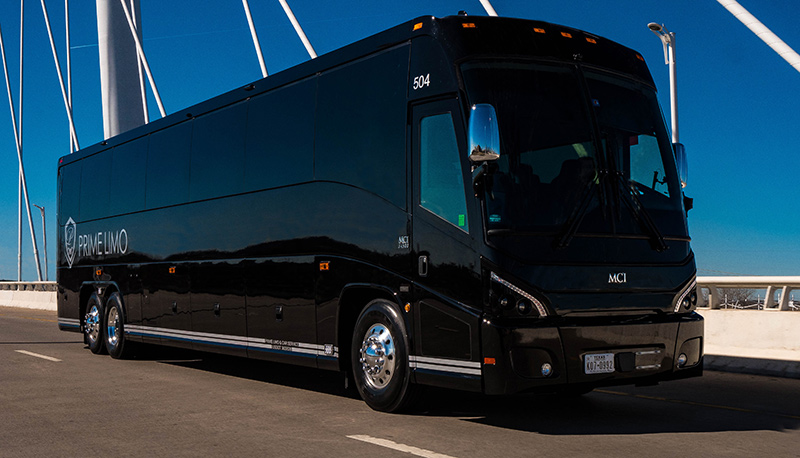 Even on that big night, Prime Limo Owner and Founder Faizan Dolani realized “this would be a good business to get into.” So, as a high school senior, he bought a used 2001 Lincoln Town Car and started driving.

“I wanted to learn the business from the ground up,” he explained. “Driving also gave me the opportunity to learn what customers want.”

“The demand (for motorcoaches) is there,” he said. “We’ve been running mini coaches and see the need for a larger vehicle. It’s a leap of faith that I think is worth it.”

It’s a move that allows the executive and event transport company to explore deeper relationships with the Dallas area’s biggest clients, made easier by the J4500’s interior touches. Dolani invested in MCI’s RGB programmable lighting option that allows, groups, companies and sports teams to travel in comfort with their own colors in addition to plush leather seating and a roomy 56-seat configuration for maximum comfort. However, Dolani says he also chose the industry’s bestseller for two other important reasons—economy and safety.

Before buying, Dolani did his research with experienced friends in the business. “I know a lot of companies around here have MCIs in their fleets. When I asked, they told me ‘go directly to MCI. Nothing drives like an MCI’.”

One of the new MCI J4500 motorcoaches in the Delaware Express fleet Customizing for the exact customer in mind is a tradition at Prime Limo, said Dolani. “Dallas is a very competitive market and I’ve been in it long enough to know what’s going to sell. We custom build all our limos, keep up all our equipment, and provide the service to match.”

He supports this philosophy with a well-trained maintenance and detailing team led by a master detailer responsible for the entire fleet. “When we pull up we want the Wow Factor,” said Dolani. “Our new J4500s have been out on trips several times already and our customers go bananas over them.”

“Passenger comfort and safety features are paramount,” says Frenze, who has been a loyal MCI customer since 2001. “And we see great value in new vehicles and standardization of equipment.” He also says it’s important to keep a young fleet, with more than three-quarters of his 30-motor coaches less than five years old.

Delaware’s newest J4500s feature a 56-passenger configuration with plush leather seating, power outlets and Wi-Fi. Delaware has also added tray tables behind every upgraded leather seat because the company is testing ala carte box lunches on charters to upcoming auto and flower shows this year. Said Frenze. “It’s an experiment, and a new level of service and we want to see how it goes over.”

The coaches also come equipped with Detroit Diesel engines, preferred by Delaware for telematics capabilities used to signal maintenance requirements such as DPF regeneration notifications and more. A 360-degree camera system and MCI’s ADAS (Advanced Driver Assistance Systems) from Bendix Fusion were also part of the order.
Bendix Fusion is a next-generation collision mitigation system that integrates a forward-facing camera with vehicle recognition software to detect moving and stationary objects. The system offers lane departure warnings and traffic sign recognition that all together helps the driver process speed limits and road obstacles.

Delaware Express customers also prize legroom and comfort. With a roster of clients that range from professional teams in nearly every sport including Philadelphia Union Soccer to the athletic department at the University of Delaware, Frenze orders his coaches with the roomiest seat configurations. To better manage relationships and schedules with athletic clients, teams are often assigned their own motor coach and driver.

“Our pro sports teams especially appreciate the legroom,” said Frenze. “And we assign our drivers the same equipment for better planning and scheduling. There’s a comfort level in knowing your driver and having the same vehicle throughout the season.”