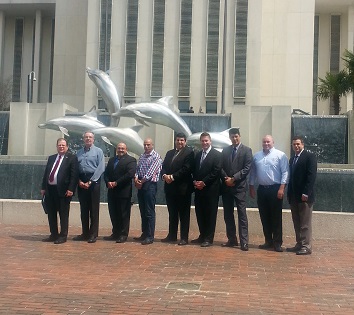 This meeting was solely dedicated to a duo of government bills that were introduced at the state level. These bill are: SB 1618 and HB 1389; they are more commonly known in Florida as the “Chauffeured Limousine and Safety Act.” This proposed legislation will de-regulate the ground chauffeured transportation service on the local level. The House chair on the transportation committee, Sen. Jeff Brandes (R-22nd District), titled these bills “The Uber Bills” because the “declawing” of these long-standing state laws will greatly benefit the opportunistic TNCs across the state of Florida. These two bills in the state House and Senate are essentially rewriting the legislative book in regard to how the limousine industry is regulated in the Sunshine State. If the bills pass, the state would then become the governing authority supplanting the current county and local organizations that control ground chauffeured transportation services.

WFLA members attended a House of Representatives committee meeting in Tallahassee, Fla. to vehemently oppose these bills. WFLA representatives were in the state capital to speak on the bills, and represent the industry at the Senate Transportation committee meeting on 3/26. They were also in Tallahassee to continue the fight on 4/2 and 4/3 as well.

As it stands now, Uber can only conduct business in the city of Jacksonville. They were unceremoniously banned in Miami, and other Florida cities are openly fighting off the unwanted advances of the overbearing TNC. Uber remains undeterred, however, throwing all of its considerable resources behind this legislation that could allow its service to operate across the state.

This situation is still developing, and CD will have more as it unfolds.